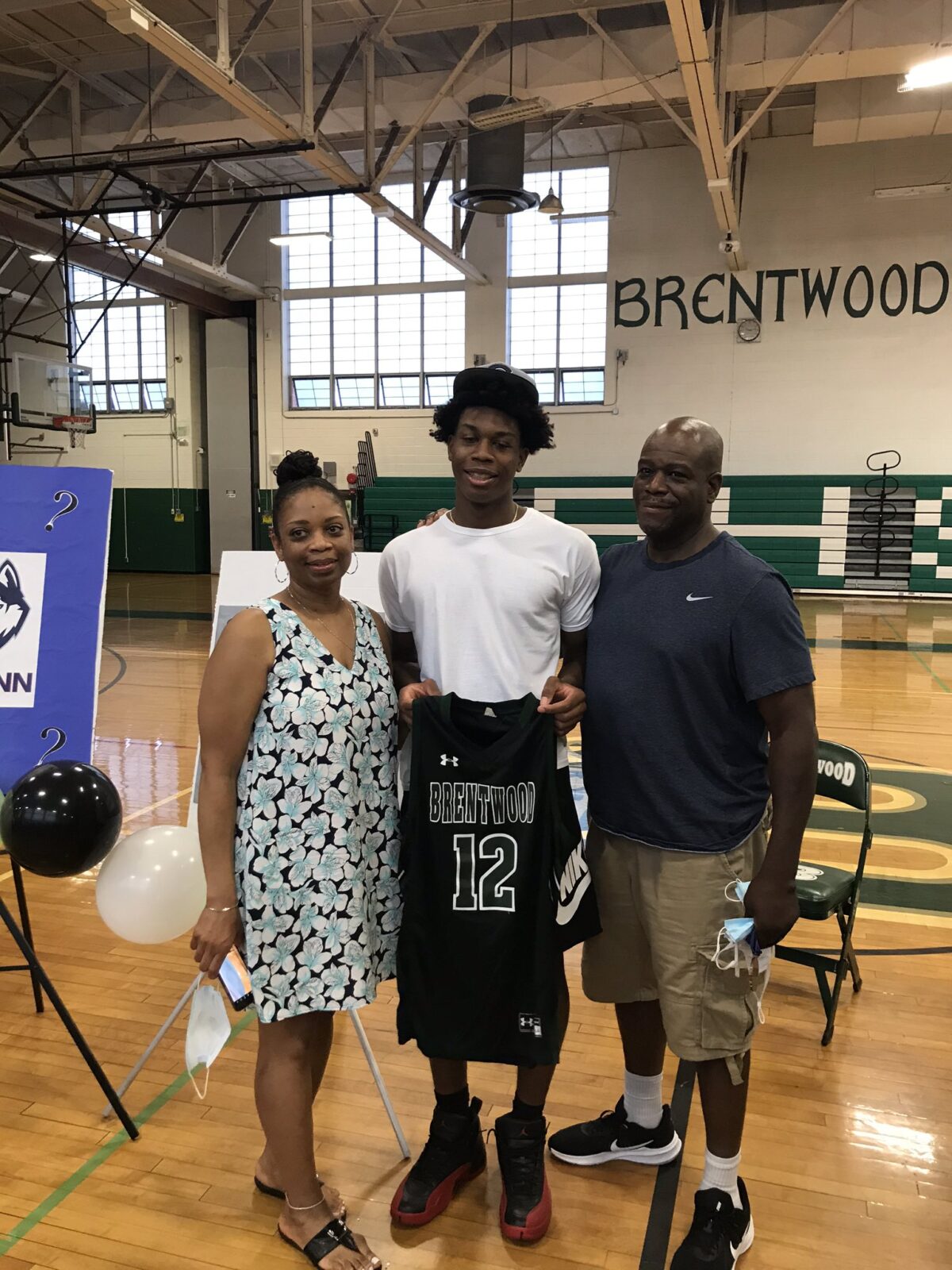 By ADAM ZAGORIA Two weeks ago, Jordan Riley took a ride with his father Monty to visit the Georgetown University campus in Washington, D.C. They weren’t able to see any students and or meet with the basketball team. They didn’t even let head coach Patrick Ewing and his staff know they were on campus. Yet the visit — along with Ewing’s recruiting message on a daily basis — was enough to make the 6-foot-4, 185-pound Class of 2021 combo guard pledge to the Hoyas on Friday over Kansas, Florida State, UConn and local option St. John’s. He has visited St. John’s, but was unable to visit the other campuses due to the pandemic. Riley said he actually made the decision on Sunday. “I saw the campus, I saw what I liked and I’m just ready to go there,” Riley said in a phone interview before his public announcement at Brentwood High School. “[Coach] Ewing and coach [Louis] Orr, they talked to me for a long time and I feel like I can learn more things, how to be a pro and stuff like that,” Riley is ranked as a three-star guard by Rivals.com. During the 2019-20 season, Riley averaged 23 points, 12 rebounds and four assists, while earning Suffolk County Player of the Year honors and leading his team to a 23-2 record and a Suffolk Class AA Championship. “I’m mostly a point guard but if it gets to a serious situation, then point god,” he said. “[I’ll] be everywhere, attack everywhere, basically just kill,” he added of his planned role at Georgetown. “Score, play defense, get everybody involved.”

Coaches are taking notice to Jordan Riley (2021) from Brentwood NY. He’s not in the top 150 ????? These recruiting services need to cut the politics out and take notice. Trust you eyes people ….. this is what a NBA player looks like in high school pic.twitter.com/yuYydcJTVK

Said NY Lightning director Shandue McNeil: “Jordan is an ultra-athletic guard. We consider Jordan athletic amongst other great athletes. His tremendous work ethic will allow him to refine his developing skillset. We believe Jordan is the most underrated guard in the country.” Added Brentwood coach Anthony Jimenez: “Brentwood basketball and the entire school community is proud of Jordan. Jordan is relentless and has a work ethic that is second to non. His talents and versatility will prove to be succcesful at the next level.” Landing a guard from Long Island, in St. John’s back yard, represents a recruiting coup for Ewing and his staff, who are trying to build their roster after a slew of defections. Four players transferred last season, big man Omer Yurtseven declared for the NBA Draft after this season and explosive guard Mac McClung transferred to Texas Tech. Riley said he hopes to eventually play professionally and believes Ewing and his staff can best prepare him. “Coach Orr and Coach Ewing, they’re saying that they can prepare me when it gets that far because they were in the same situation,” he said. Riley is Georgetown’s second verbal commit in 2021, joining point guard Tyler Beard. Riley said he’s working on recruiting three-star St. Raymond’s Class of 2021 guard Malachi Smith and five-star Class of 2022 Oak Hill Academy (VA) guard M.J. Rice to Georgetown. “Probably some other people,” Riley said. Said Monty Riley: “The one thing that Jordan has been, he’s been a fighter. He’s always been the underdog and now he’s still the underdog but he’s the lion.” Photo: @thenextprospect Follow Adam Zagoria on Twitter Follow ZAGSBLOGHoops on Instagram And Like ZAGS on Facebook

After missing on Jordan Riley, St. John's must land some New York-area stars