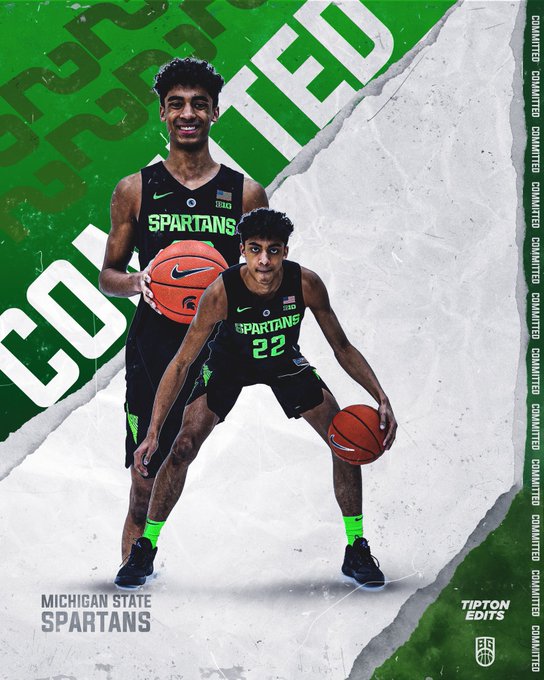 By JACOB POLACHECK Max Christie is headed to Michigan State. Christie, the 6-foot-6, 165-pound shooting guard from Rolling Meadows (IL), announced his commitment to Michigan State on Tuesday in an interview with Fox College Hoops analyst Andy Katz. “For me, it was my relationship with coach [Tom] Izzo, his staff and the players,” Christie told ZAGSBLOG Wednesday by phone. “The relationship was something I really wanted to continue and be a part of. “Their team culture, program history and the family that they have going on there was something that I definitely wanted to take advantage of as an opportunity to grow as a player and as a person.” Christie chose Michigan State over Villanova, Virginia, Purdue and Ohio State. He took his first and only official visit to Michigan State on March 7. Christie joins Pierre Brooks as the second commit in Michigan State’s 2021 class. “Pierre has definitely recruited me a lot to come to Michigan State,” Christie said. “He’s someone that was definitely influential in my decision. We’ve had our talks before.” Christie’s commitment comes less than two weeks after the Spartans landed a commitment from Class of 2022 No. 1 ranked prospect Emoni Bates. “We haven’t talked too much, but I’m sure those talks will probably come up very, very soon to try and get us to play together,” Christie said on potentially playing with Bates. Michigan State has also extended an offer to Max’s younger brother Cam, a class of 2023 prospect. According to 247Sports.com, Christie is ranked as the No. 1 shooting guard and No. 13 overall player in the Class of 2021. “Michigan State fans can expect a really versatile combo guard, who can rebound and push the ball for himself or make plays for others,” Christie said. “I can come off pin downs and shoot off the dribble or come of ball screens, make reads and make plays for my teammates.” He averaged 25 points and 11 rebounds per game this past season for Rollin Meadows, leading his school to its first 20-win season in 30 years. “I just want to win as much as possible at Michigan State,” Christie said. “That’s my main goal, being able to win as much as possible, win a national championship, win Big Ten titles, regular season and tournament. “I’m definitely most excited for building relationships with different people and new players,” he said. “And being able to be challenged on and off the court. That’s something I really look forward to and something I think I can thrive in.” Follow Jacob on Twitter Follow Adam Zagoria on Twitter Follow ZAGSBLOGHoops on Instagram And Like ZAGS on Facebook