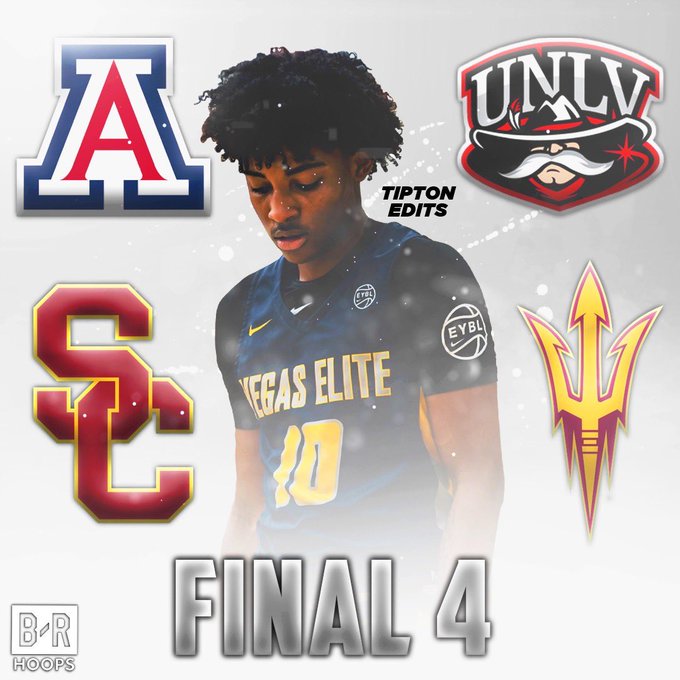 By JACOB POLACHECK Zaon Collins is down to four. Collins, the 6-foot-1, 165-pound point guard from Bishop Gorman (NV) High School, named Arizona, USC, UNLV and Arizona State as his final four schools on Monday, via Twitter. Collins broke down each school for Rivals.com: Arizona: “They stand out because they are always big in the Pac 12. They produce a lot of pros and I have good gut feel for [Sean Miller] and the coaching staff. I feel like that the stage they are on is really big time and that they could help me produce.” Arizona State: “My favorite thing is that they are all guards. I like to play with a bunch of guards that run the floor and score. I love Bobby Hurley, he was one of the best college point guards to ever play and me and my parents love the coaching staff. They have been the only school we’ve had a zoom meeting with during quarantine.” UNLV: “[T.J. Otzelberger] his mentality, he just wants to win. That’s what I like. I’m a winner and I hate to lose more than anything on the planet. He just won’t give up and me and my parents love that plus UNLV is the hometown school and me and my family love the coaches there.” USC: “I like everything about USC. The coaching staff, where it is in California. California has the best weather, you can’t beat that. USC is the only official visit that I took an they surprised me with everything they have there. I watched practice and it was really intense. Coach [Andy] Enfield is a good guy and my family connected with all the coaches and feel comfortable that they would look out for me.” Collins took his first and only official visit to USC last October. According to 247Sports.com, Collins is ranked as the No. 5 point guard and No. 40 overall player in the Class of 2021. Follow Jacob on Twitter Follow Adam Zagoria on Twitter Follow ZAGSBLOGHoops on Instagram And Like ZAGS on Facebook