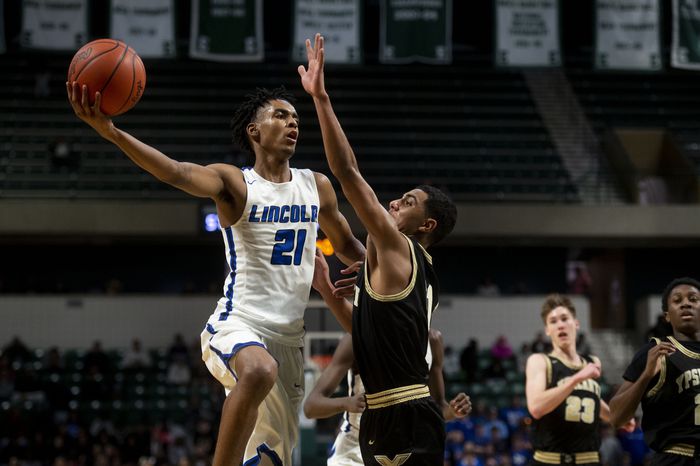 By JACOB POLACHECK Emoni Bates has made a college decision. Bates, the 6-foot-8, 200-pound small forward from Ypsilanti (MI) Lincoln and No. 1 overall prospect in the Class of 2022, announced his commitment to Michigan State on Monday in an interview with ESPN. “They get all my respect,” Bates said on ESPN. “I love how they coach, coach [Tom] Izzo, I like how they focus on defense more than offense.” “On and off the court, he has passion. He’s just an amazing guy, overall.” Michigan State was the only school to call Bates at midnight on June 15 when college coaches were first allowed to contact Class of 2022 prospects. “If he does go to college they definitely made his choice that much easier,” his father, Elgin said earlier this month.

Here’s some clips of Emoni Bates making 36 three-pointers in a row. https://t.co/qNFAHCeHGN

Added Emoni: “Coach Izzo and coach [Mike] Garland and that entire MSU staff has been showing love since his seventh grade year. They’ve been very consistent. They really have a genuine care for him and the family. They care for him, not only as a player, but as a person. That’s really big for us as a family and for him as a player.” Bates also announced he is leaving Ypsilanti Lincoln to star on the new Ypsi Prep Academy basketball team. “It’s my hometown. I didn’t really want to leave, so I’ll stay here until it’s time for otherwise,” Bates told wzyz.com. “You never want to leave your foundation, you know? Home is home. If we can do it here, why not do it here? Family support, community, there’s nothing better than being home.” Elgin Bates told the site, adding that Emoni and the family turned down offers to play at basketball schools across the country.

With the NBA one-and-done rule set to possibly end in 2022 if it’s collectively bargained, the expectation by many is that Bates won’t ever spend a single day on a college campus and will head straight to the NBA that year. “I don’t plan on reclassifying. I’ll probably play two more years [of high school],” Bates said. “It really depends how this year goes. After this year it will tell me everything I need to know. I can’t decide on that right now. After this year, if it’s too easy, I might — but if not, I’m probably going to play another year.” Michigan State first extended an offer to Bates last July. This article has been updated. Follow Jacob on Twitter Follow Adam Zagoria on Twitter And Like ZAGS on Facebook