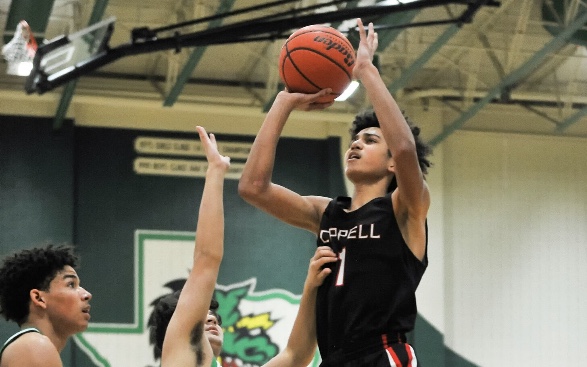 By JACOB POLACHECK Anthony Black is one of the most compelling prospects in the Class of 2022, holding multiple high-major offers in football and basketball. On the basketball side, Black, a 6-foot-5, 180-pound point guard from Coppell (TX), currently holds offers from Saint Louis, TCU, Texas, Texas Tech, Old Dominion, North Texas and Texas-Arlington. He broke down each offer for ZAGSBLOG: Texas-Arlington: “I’ve known the coaches for a little while, even before the recruiting days because of my stepdad. We talked a year or two ago. I like what they’re doing up there.” Old Dominion: “I haven’t been talking to them often, but once they started recruiting me we talked for a couple of weeks. Right after I got the UTA offer, their coach called me and offered me too.” North Texas: “Coach [Grant] McCasland has a son that plays for the same AAU program as me. We’ve been pretty tight for a while now.” Texas Tech: “Coach Ulric [Maligi] at Texas Tech and I have been in contact. We’ve been talking for a long time.” TCU: “I haven’t really had much conversation with them before Sunday when they offered, but I talked to [Tony Benford] at TCU and he said that he likes my game, how I compete and then gave me an offer.” Texas: “They were one of the first schools to reach out. Coach [Neill] Berry reached out and we talked for a long time. A couple days later, I talked to coach [Shaka] Smart. They were the first high-major school to offer me last Sunday.” Saint Louis: “Coach [Ford] Stuen, he was actually one of the first coaches that reached out to me when they could. We’ve been on the phone multiple times. He’s a good dude. He keeps checking in and said he’s been watching my games.” Of the schools that have offered Black, Texas-Arlington and Saint Louis are the only two schools without a football program. “I’m looking at the relationships with the coaches,” Black said. “Who are they recruiting in my class with me? “Development, when I get there, are they going to be able to develop me and help me become a pro and take my game to the next level.” Black says that, at the moment, he does not prefer playing one sport over the other and is confident he could play both football and basketball in college. “If the right school gives me the opportunity, then I think I could,” he said. Black also competes in track and field (high jump, triple jump). Black’s father, Terry, was a former basketball standout at Baylor. “I want to visit all the Texas schools, like Texas, Texas Tech, probably Baylor too,” Black said. “I’ve been talking with the coaches there. I haven’t really talked to A&M yet, but all the other Texas schools pretty much.” Black also broke down his game for ZAGSBLOG: “I like to play good defense, go after rebounds, play in transition and make a play for my teammates,” he said. “In the half court set, I like to go by my defender and see what I can do at the next level, either put it up or kick it out. I like coming off ball screens to shoot and attack.” Photo: Coppell Athletics Follow Jacob on Twitter Follow Adam Zagoria on Twitter And Like ZAGS on Facebook