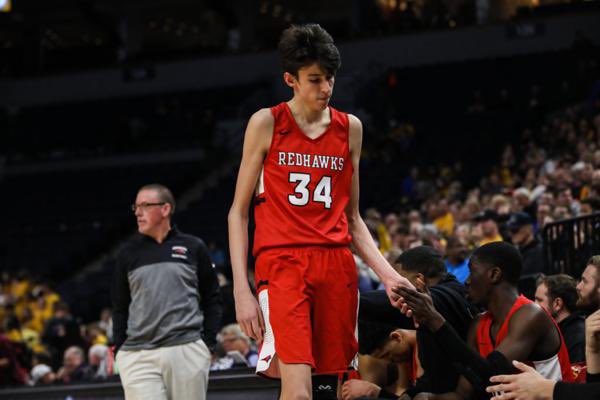 By JACOB POLACHECK & ADAM ZAGORIA
Chet Holmgren is down to seven. Holmgren, the 7-foot, 183-pound center from Minnehaha (MN) Academy, named Minnesota, Gonzaga, Memphis, North Carolina, Georgetown, Michigan and Ohio State as his top seven schools on Friday, via Twitter. According to ESPN.com, Holmgren is ranked as the No. 1 overall player in the Class of 2021. Brian Sandifer, Holmgren’s coach with the Grassroots Sizzle AAU program, recently told ZAGSBLOG that Holmgren should at least consider the NBA G League route in 2021 due to how the COVID-19 pandemic might impact college campuses. Holmgren’s father, David, told ZAGSBLOG he’d prefer for Chet to go to college but they’re open to all options. “It’s way too early to rule out any potential paths and I don’t know enough about the G league path to say no,” Chet Holmgren said Thursday by text. “However, at this point in time, I am focused toward finding the best college for myself and my family’s future.” Holmgren took official visits to Gonzaga and Ohio State in the fall, as well as an unofficial visit to Georgetown last summer. “Holmgren is one of the more unique prospects I have scouted,” 247Sports director of basketball scouting Jerry Meyer told ZAGSBLOG earlier this month. “You don’t see many players with his length that are that skilled. The key for him maxing out on his ability is to get stronger and stronger.” “In general, Chet is someone that can average two blocks and two three’s per game,” Rivals national basketball analyst Corey Evans said. “Off the top of my head, I’m not sure anyone can come close to such numbers.” Holmgren has spent the last three years at Minnehaha Academy (MN), playing alongside Gonzaga signee Jalen Suggs, who is ranked as the No. 6 overall player in the Class of 2020 per ESPN.com. Sandifer also suggested Suggs should consider going pro this year due to the pandemic. “Chet’s work ethic, his passion for the game are what stand out. He has a real passion and always has,” Minnehaha head coach Lance Johnson said. “His defensive acumen is unparalleled from anybody I’ve seen in high school basketball. Next year his offensive stats are going to be really incredible now that Jalen [Suggs] has moved on.” This past season, Holmgren averaged 14.3 points per game and was named to the Minnesota high school boys’ basketball all-state first team. Minnehaha finished with a 25-3 overall record before the season was cut short due to the coronavirus pandemic. “He’s the epitome of a no position prospect that can play all over the floor,” Evans said. “We’re going to him and haw over his strength or lack thereof, but really the traits that he possesses are some that only a select few have ever showed within the sport over the past 20 years.” Follow Jacob on Twitter Follow Adam Zagoria on Twitter And Like ZAGS on Facebook