Minnehaha Academy's Chet Holmgren is No. 1 in Class of 2021 rankings | Zagsblog
Follow @adamzagoria

Minnehaha Academy’s Chet Holmgren is No. 1 in Class of 2021 rankings 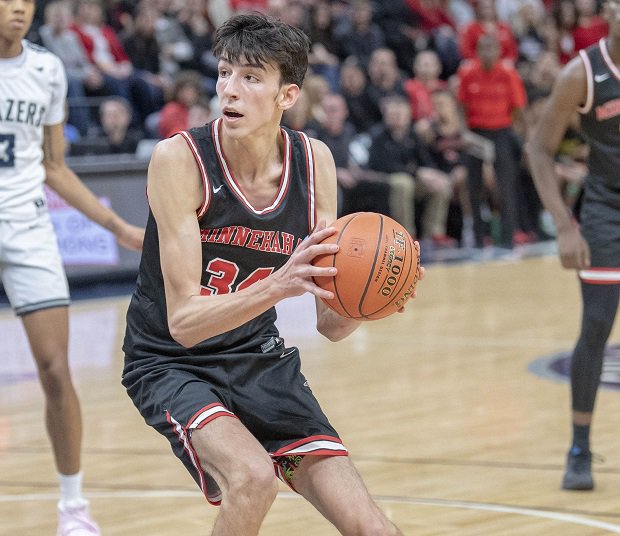 By JACOB POLACHECK Chet Holmgren has taken over the No. 1 spot in the 2021 rankings. Holmgren, the 7-foot, 183-pound center from Minneapolis, MN, moved up a spot after former No. 1 Jonathan Kuminga graduated and reclassified to the Class of 2020 earlier this month. “Holmgren is one of the more unique prospects I have scouted,” 247Sports director of basketball scouting Jerry Meyer said. “You don’t see many players with his length that are that skilled. The key for him maxing out on his ability is to get stronger and stronger.” Holmgren’s stand out game came on Jan. 4 in a sold out matchup against Sierra Canyon (CA) at the Target Center. Holmgren finished with nine points, 10 rebounds and 12 blocks as the Redhawks defeated a Sierra Canyon squad that featured five-star prospects Ziaire Williams and B.J. Boston, as well as Lebron James Jr. and Zaire Wade, Dwyane Wade‘s oldest son. “In general, Chet is someone that can average two blocks and two three’s per game,” Rivals national basketball analyst Corey Evans said. “Off the top of my head, I’m not sure anyone can come close to such numbers.” Holmgren has spent the last three years at Minnehaha Academy (MN), playing alongside Gonzaga signee Jalen Suggs, who is ranked as the No. 6 overall player in the Class of 2020 per ESPN.com. “Chet’s work ethic, his passion for the game are what stand out. He has a real passion and always has,” Minnehaha head coach Lance Johnson said. “His defensive acumen is unparalleled from anybody I’ve seen in high school basketball. Next year his offensive stats are going to be really incredible now that Jalen [Suggs] has moved on.” As a freshman during the 2017-18 season, Holmgren saw limited playing time, recording averages of 6.2 points and 3.0 rebounds per game as Minnehaha won their second consecutive class 2A state title. As a sophomore, Holmgren began to break out, averaging 18.6 points and 11.0 rebounds per game and contributing to yet another class 2A state title. “His improvement over the last four years has been astronomical,” Johnson said. “A lot of that has to do with the fact that he grew, although he was always tall for his age, he grew into a 7-foot body with a 7-foot wingspan.” This past season, Holmgren averaged 14.3 points per game and was named to the Minnesota high school boys’ basketball all-state first team. Minnehaha finished with a 25-3 overall record before the season was cut short due to the coronavirus pandemic. “He’s the epitome of a no position prospect that can play all over the floor,” Evans said. “We’re going to him and haw over his strength or lack thereof, but really the traits that he possesses are some that only a select few have ever showed within the sport over the past 20 years.” In terms of his recruitment, Holmgren told ESPN’s Jeff Borzello that he’s been in touch mainly with Gonzaga, North Carolina, Minnesota, Michigan, Ohio State and Georgetown. Holmgren took official visits to Gonzaga and Ohio State in the fall, as well as an unofficial visit to Georgetown last summer. Chet’s father, Dave Holmgren played at the University of Minnesota from 1984-88, appearing in 57 games. Injuries limited his career as he only averaged 1.0 point and 0.7 rebounds in 5.4 minutes per game over the course of his career. Photo: Josh Johnson Follow Jacob on Twitter Follow Adam Zagoria on Twitter And Like ZAGS on Facebook