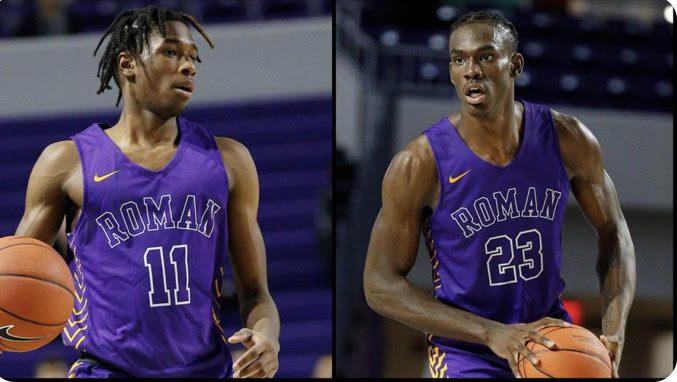 BY RICH FLANAGAN PHILADELPHIA –– As if adding one of the most heralded players in the nation from a school up north wasn’t enough, Montverde Academy (Fla.) is adding a teammate from that very same school. Justice Williams, one of the top guards in the Class of 2022, will transfer and play for head coach Kevin Boyle next season, joining teammate and 6-foot-10 rising junior Jalen Duren to make the move from Roman Catholic (Pa.) to the Eagles program. The pair led the Cahillites to two Philadelphia Catholic League title game appearances, including a title in 2019, and they looked primed to bring Roman Catholic its first state title since 2018 before the coronavirus pandemic halted the Pennsylvania Interscholastic Athletic Association Tournament. The 6-3 guard averaged 18.6 points per game last season which included a 32-point performance against league rival, Archbishop Wood, where he shot 13-for-14 from the free-throw line. Williams already holds offers from Villanova, Georgetown, Florida, Memphis, Michigan, Pittsburgh, Maryland and Miami (Fla.), among others. Roman Catholic head coach Matt Griffin confirmed Williams’ decision to transfer on Thursday evening and it becomes the latest high-profile addition for Boyle this offseason. Duren, the No. 2 overall player in the Class of 2022, announced his decision to transfer in April. Two more major offseason additions were Jalen Hood-Schifino, a 6-5 junior and Pitt commit who made the jump from Combine Academy (N.C.), and Malik Reneau, a 6-7 forward who is traveling about four hours north from Mater Academy Charter to play for the Eagles. It has been a whirlwind offseason for Montverde Academy has it looks to be replace Naismith High School Player of the Year Cade Cunningham (Oklahoma State), Scottie Barnes (Florida State), Day’Ron Sharpe (North Carolina), Moses Moody (Arkansas) and Zeb Jackson (Michigan). Even with the influx of talent, Montverde Academy was already boasting a potent lineup behind Class of 2021 four-star guard Langston Love, who holds offers from Villanova, Baylor, UCLA and Texas, to name a few, as well as two rising juniors in Caleb Houstan, the No. 3 player in the 2022 class behind Duren, and Dariq Whitehead, a 6-4 guard with offers from LSU, Seton Hall and Rutgers. Williams, Duren and Whitehead played together with USA Basketball. The added dimension of Boyle’s ability to develop NBA talent shows why so many elite prospects are flocking to learn under him. Boyle has coached six top-3 NBA Draft picks since 2011 — two No. 1s in Ben Simmons (Philadelphia 76ers) and Kyrie Irving (Brooklyn Nets), two No. 2s in Michael Kidd-Gilchrist (Charlotte Hornets) and D’Angelo Russell (Minnesota Timberwolves) and two No. 3’s in R.J. Barrett (New York Knicks) and Joel Embiid (76ers). Cunningham looks to be the next as he’s projected to go top-3 in the 2021 NBA Draft. While the Eagles have geared up for big offseason, the other power in Fla. has been doing the same. IMG Academy, which claimed the GEICO High School Nationals Championship in 2019, lost Jaden Springer (Tennessee), Mark Williams (Duke), Matthew Murrell (Ole Miss), Mikeal Brown-Jones (VCU),  Zach Edey (Purdue) and Kenyon Martin Jr., who declared for the 2020 NBA Draft after doing a post-grad year and chose to forgo a scholarship offer to Vanderbilt. Just like Montverde Academy, the Ascenders have reloaded with the additions of Lynn Greer III, who comes over after having been teammates at Roman Catholic with Williams and Duren for the past two seasons, Jett Howard, the son of Michigan head coach Juwan Howard who is making the move from University City, and Jaden Bradley, an elite guard who’s transferring from Cannon School (N.C.). Greer, a 6-3 point guard whose father starred at Temple, reclassified to the Class of 2021 after playing four years under Griffin and holds offers from Louisville, Florida, Indiana, Oregon and Marquette. Howard, a 6-4 guard in the Class of 2022, holds offers from Florida, Vanderbilt and his father’s alma mater. Bradley, a 6-2 combo guard in the 2022 class, holds offers from North Carolina, Auburn, Kansas, Texas Tech and Xavier. Those three additions arrive on head coach Sean McAloon’s roster to be combined with 2021 forwards Moussa Diabate, a 6-10 versatile big man and five-start prospect with offers from Kentucky, Oklahoma and Louisville, and Warren Lynn Kidd, a 6-9 big with his own offers from Auburn, Florida and Georgia Tech. The Ascenders have also sent their fair share of players to the NBA including Dwayne Bacon (Hornets), Jonathan Isaac (Orlando Magic), Dwight Powell (Dallas Mavericks), and Trevon Duval, who is playing for the Iowa Wolves in the G-League after having spent time with the Milwaukee Bucks and Houston Rockets. Things are starting to take shape as the academic school year recently ended for a multitude of schools across the country and player movement has been robust, particularly for these two high school powerhouses. This might not be the official end and it could end up being an even hotter summer in northern Fla. Here’s a look at Montverde Academy’s projected roster heading into next season: 1) Michael Wu, 2021, Committed to Eastern Washington (one of China’s premiere young players) 2) DaRon Holmes, 2021, Ranked 30th by Rivals 3) Langston Love, 2021, Ranked 22nd by ESPN 4) Caleb Houstan, 2022, Ranked 3rd by ESPN 5) Jalen Hood-Schifino, 2022, Top-25 National 6) Justice Williams, 2022, Top-25 National 7) Jalen Duren, 2022, Ranked 2nd by ESPN 8) DaRiq Whitehead, 2022, Ranked 9th by ESPN 9) Ryan Nembhard, 2021, committed to Creighton 10) Malik Reneau, 2022, Top-35 Follow Rich on Twitter Follow Adam Zagoria on Twitter And like ZAGS on Facebook