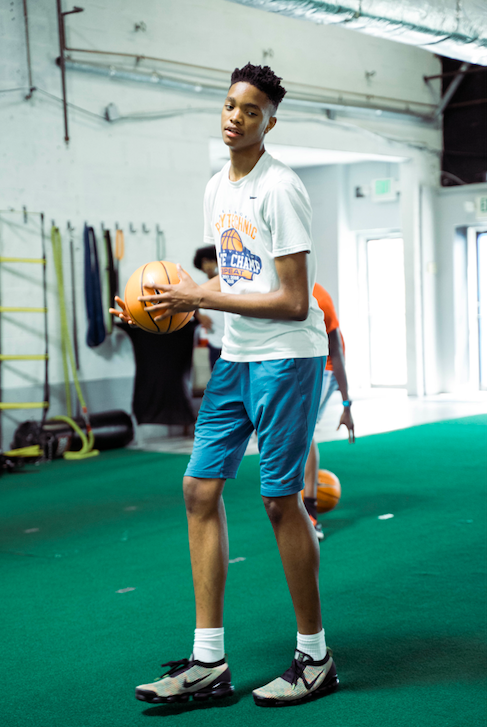 By JACOB POLACHECK After being ranked by ESPN.com as the No. 7 overall player in the Class of 2023, Kwame Evans Jr. is beginning to draw national attention. “Definitely, a lot more people have reached out [since the ranking],” Evans said. “I’m just trying to win and then to get better every time I play.” Evans, the 6-foot-8, 186-pound small forward from Baltimore (MD) Polytechnic Institute, currently holds offers from Tennessee, Xavier, St. John’s, Texas A&M, Auburn, Georgetown, Virginia Tech, George Washington, DePaul and San Diego State. As he enters his sophomore year, schools are starting to take notice. “A lot of schools have shown interest,” Evans said. “Wake Forest, Memphis, Michigan State, Notre Dame, VCU, Mississippi State, Oklahoma State, Boston University, TCU and Georgia Tech.” With his recruitment still in the early stages, Evans said he has no timetable for when he plans on making a college decision. “As of right now, I’m just looking at the atmosphere and how they treat their players,” Evans said. According to ESPN, Evans is ranked as the No. 2 small forward in the Class of 2023. “I shoot a lot of threes,” Evans said. “If I get a defensive rebound, I push the ball and make the right play. I get assists, block shots, play defense and can finish around the cup.” At Baltimore Poly during the 2019-20 season, Evans played alongside Division 1 prospects such as Justin Lewis (Marquette), Rahim Ali (Howard) and Brandon Murray (IMG Academy). “It’s helped me a lot with being more patient during the game,” Evans said. “Playing alongside players with high talent levels helps with giving up the ball and getting the ball back.” Evans’ play during the 2019-20 season was enough to be named an honorable mention for the MaxPreps Freshman All-American Team and be considered one of the top prospects in his class. Evans was set to play for Team Durant on the Nike EYBL before Nike canceled the league for the remainder of 2020 due to coronavirus concerns. In the meantime, Evans is training from home. “I’m doing a lot of strength workouts, conditioning around the house and sometimes I get outside to the local courts,” he said. “I’m working on my off the dribble shots, more effective plays around the cup and finishing better.” Photo: Eric Bowden This post has been updated. Follow Jacob on Twitter Follow Adam Zagoria on Twitter And Like ZAGS on Facebook