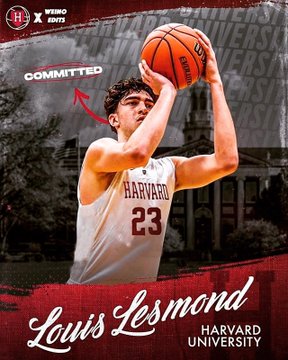 By JACOB POLACHECK Louis Lesmond, the 6-foot-5, 190-pound shooting guard from Evanston (IL) Notre Dame College Prep, announced his commitment to Harvard on Saturday, via Twitter. Lesmond chose Harvard over school such as Dayton, DePaul, Illinois, Marquette, Nebraska, Oklahoma, Wisconsin and Xavier. “I’m choosing Harvard because it’s a high major basketball program in the Ivy League so I get the best of both worlds in basketball and academics,” he told 247Sports.com. “I really like their coaching staff. Coach Tommy Amaker is a really smart and good coach with a great plan. He’s really devoted. The staff was nice and showed a great love and interest in me.” He joins Bennett Pitcher and Denham Wojcik as the third commit in Harvard’s 2021 class. Lesmond, who is originally from France, moved to the United States after his freshman year. Lesmond’s father played at Purdue and and mother was on the French national team. Follow Jacob on Twitter Follow Adam Zagoria on Twitter And Like ZAGS on Facebook