Duke's Cassius Stanley declares for NBA Draft, will be represented by his father | Zagsblog
Follow @adamzagoria 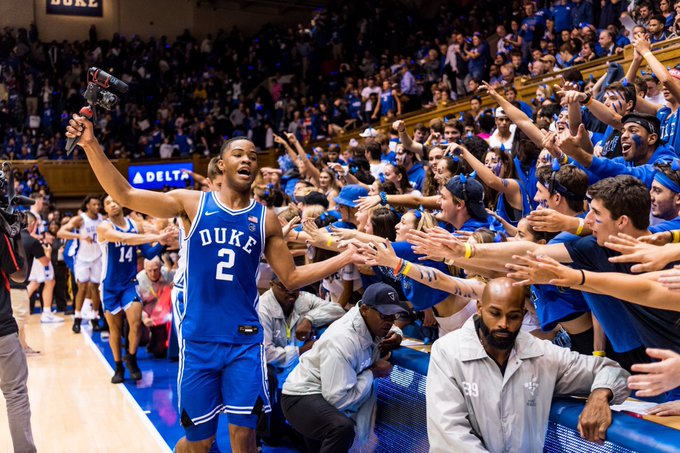 Duke freshman guard Cassius Stanley has declared for the NBA Draft and will be represented by his father, Jerome Stanley, a certified agent, his father told ZAGSBLOG. He is ranked the 50th best player available in the Draft, per ESPN.com. An ACC All-Freshman selection, Stanley completed his freshman season at Duke averaging 12.6 points and 4.9 rebounds, while shooting 47 percent from the field and 73 percent at the free throw line in 29 starts.

“It was an absolute joy to coach Cassius this season,” said head coach Mike Krzyzewski. “I want to congratulate him and his great family on this decision. I’ve seen Cassius grow both as a player and person here at Duke, and I can’t wait to see how his career develops at the next level. Any NBA team will be very fortunate to get such a mature young man who is not only an incredibly-gifted athlete, but a leader that wants nothing but the best for himself and his teammates.”

Stanley opened and closed his freshman season in style, scoring 13 points in the win over Kansas at Madison Square Garden in his debut and pouring in 19 points on 6-of-10 shooting in the win over North Carolina on March 7, which proved to be Duke’s final game of the shortened 2019-20 season.

“I feel blessed to have worn the Duke jersey and choosing Duke was the best decision of my life,” said Stanley. “I have grown physically, emotionally, as a person, and as a basketball player. Since I was a young teen, my dream was to play in the NBA and have a great career. Upon joining The Brotherhood, my immediate goal became helping our team reach the Final Four and contend for a national title. I truly believe that is exactly what would have happened if our season wasn’t interrupted.

“As much as I feel a burning desire to make another run at the Final Four, I feel compelled to make the best decision for my professional success, and therefore, I have decided to enter the 2020 NBA Draft. I want to thank Coach K, the entire Duke coaching staff and my teammates for all their support. I also want to thank our trainers, strength coaches, managers, administrative staff, and academic support staff. Last but not least, thanks to the Crazies and Duke fans all over the world for helping to make this past year the most fun I’ve ever had playing the sport we all love.”

Both a high-flying dunker and accurate three-point shooter, Stanley dazzled with his ability to finish at the rim. The Los Angeles native threw down four highlight-reel dunks in a win at Georgia Tech on his way to 14 points. He went 5-of-7 from three-point range and scored 21 points in the home win over Virginia Tech, while his career-high of 24 points came against Louisville.

The Blue Devils have had at least one player selected in 32 of 39 drafts under Krzyzewski. Coach K has tutored a total of 64 draft picks since taking over the Duke program, including a Draft-record 41 first-round selections. Photo/Release via Duke Follow Adam Zagoria on Twitter And Like ZAGS on Facebook