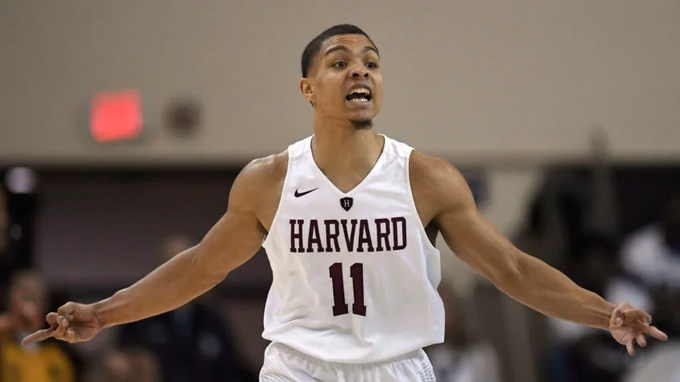 By JACOB POLACHECK Harvard transfer Bryce Aiken is down to four. Aiken, the 6-foot, 175-pound guard out of New Jersey, has narrowed his list to Iowa State, Maryland, Michigan and Seton Hall, he confirmed to ZAGSBLOG Wednesday. “All of the schools present their respective unique situations,” Aiken said. “The final four schools are representative of the established bonds that I’ve been fortunate enough to develop with each coaching staff throughout the recruiting process.” He broke down each school: Seton Hall: “It’s evident that Coach [Kevin] Willard’s ways have been working as the stature of the program has elevated over the past few years. He’s also been able to develop players, more specifically guards, which has allowed them to thrive in his system. The Big East is one the best conferences in the country and the opportunity to showcase my talent in that league is second-to-none.” Maryland: “They will be a Top 20 Team throughout the 2020-2021 Season. With the returning talent they have, there is a legitimate chance of playing in the Final Four and competing for a National Championship. The opportunity to replace Anthony Cowan and contribute to the program’s winning ways is an intriguing one.” Iowa State: “Coach Steve Prohm has the consummate belief in my ability as a player. The Big 12 is a highly competitive conference, which would allow me to showcase my ability against the best of the best. One challenge for me is not being able to visit due to our current circumstances.” Michigan: “Coach Juwan Howard has the NBA experience that I would relish in learning from. By watching them play on TV, you can see that the team has a lot fun while also competing at a high level. I’ve been able to develop a relationship with him in which he reassures his belief in my ability to help his team win. They’ll be another top 10 team and going into that situation – being able to lead those guys and represent the University of Michigan would be incredible.” Aiken is graduating and transferring from Harvard after playing just seven games this past season due to a foot injury. In those seven games, Aiken averaged 16.7 points. 1.9 rebounds and 1.7 assists. He has no timetable for a decision. As a junior, Aiken averaged 22.2 points, 2.9 rebounds and 2.6 assists per game in 18 games played. Aiken is expected to get a medical redshirt, and due to Ivy League rules was forced to find a new school to finish out his collegiate career. The NCAA extended the recruiting Dead Period on Wednesday until at least May 31, which means prospects are unable to take visits for at least another two months. Photo: Jessica Hill/AP Photo Follow Jacob on Twitter Follow Adam Zagoria on Twitter And Like ZAGS on Facebook