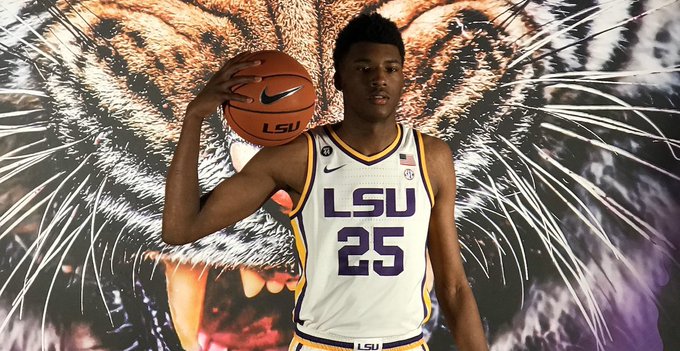 By JACOB POLACHECK Jerrell Colbert, the 6-foot-9 center from Cornerstone Christian (TX), announced his commitment to LSU on Sunday, via Twitter. “I picked them because basically it’s where I’m most comfortable at and the best fit for me to get to the next level with their training,” Colbert told 247Sports.  Colbert’s commitment comes just hours after the four-star 2020 point guard Eric Gaines announced his commitment to LSU on Sunday morning. “I saw all the players and they all said that LSU was the best choice because I could get the best training,” Colbert explained. “When I saw the practice I could see they do really well with training. This was the best decision for me, and I think they do well with big men” Colbert chose LSU over schools such as Memphis, Oklahoma, Baylor, Michigan, USC and Houston, among others. He took his official visit to LSU back in December. “Really he was just treating me like family,” he said about head coach [Will] Wade. “He was always there. When I want to talk to him he always said he wants me to be at that school.” Colbert is ranked as the No. 32 overall player in the Class of 2021 and the No. 6 ranked center, according to 247Sports. Follow Jacob on Twitter Follow Adam Zagoria on Twitter And Like ZAGS on Facebook