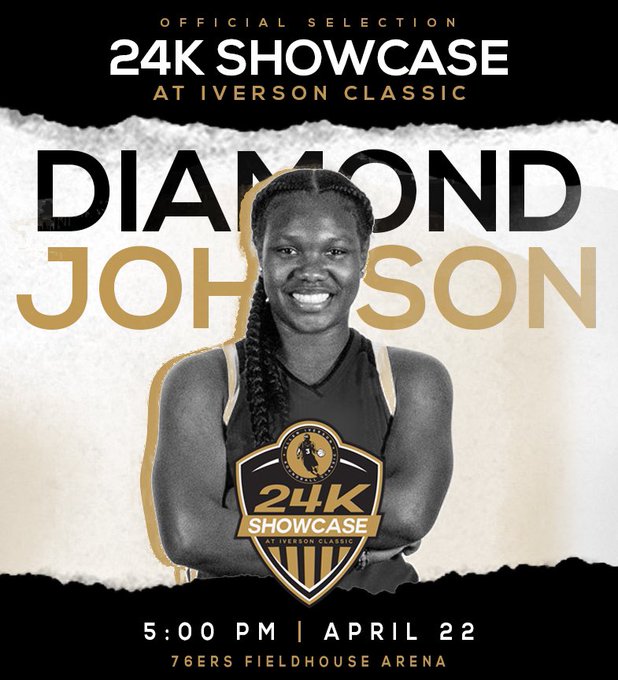 By JACOB POLACHECK & ADAM ZAGORIA The Iverson Classic announced Monday that Diamond Johnson of Neumann Goretti High School (PA) will compete in the 24K Showcase at the Iverson Classic, marking the first time in the sport’s history that a woman has been selected for a men’s game at this level. Iverson classic co-founders Allen Iverson, Jai Manselle and Bobby Bates FaceTimed Johnson’s team during practice to let her know that she is being invited to play in the showcase on April 22. “Now she’s standing alone in history to be a part of something like this,” Bates said Monday. ​Johnson is committed to Rutgers for the 2020 class. “It’s an amazing feeling and I am so happy for her,” said Neuman-Goretti coach Andrea Petersen. “I had chills when the news was given to me. I knew what this meant to the women’s game and how this moment was going to change a lot of things. To hear them say her name and she would be taking that 24th spot was unbelievable. To have a player I coach break that barrier, is a special moment. “We make a lot of memories coaching but this is one that will never be forgotten. She is paving the way for our younger women to show them anything is possible. I see her every day and know the work she puts into the game she loves. I have never met a student-athlete like her before. Her motor is different. She has earned this moment and there is no better female to break this barrier. She is such a role model to everyone, especially those in Philly. She’s built different.” The 24K Showcase is one of two full-length games taking place during Iverson Classic week. The other is the Iverson Classic All American Game that takes place two days later on April 24. The 24K Showcase features top ranked talent and participants are selected without regard to class.⁣ Johnson has racked up 2,741 and numerous accolades over her high school career including Pennsylvania Gatorade Player of the Year, SLAM Summer Classic MVP, All-USA Today Pennsylvania First Team, Nike EYBL MVP and more. Johnson was one of the most notable omissions from the 2020 McDonald’s All-American Game rosters. “Diamond is a special basketball player,” Rutgers Coach C. Vivian Stinger said when she signed in November. “We believe she is the best guard in the country, bar none. She is Rutgers’ kind of guard, which is saying she is the whole package with her flair, her style, her defense, and most impressively, her scorer’s mentality. Diamond is in the very image of the numerous Rutgers guards that have brought us deep into NCAA Tournaments and have gone on to successful professional careers in the WNBA.” ​​The 2020 Iverson Classic will be played in memory of Kobe and Gianna Bryant. This story has been updated. Follow Jacob on Twitter Follow Adam Zagoria on Twitter And Like ZAGS on Facebook