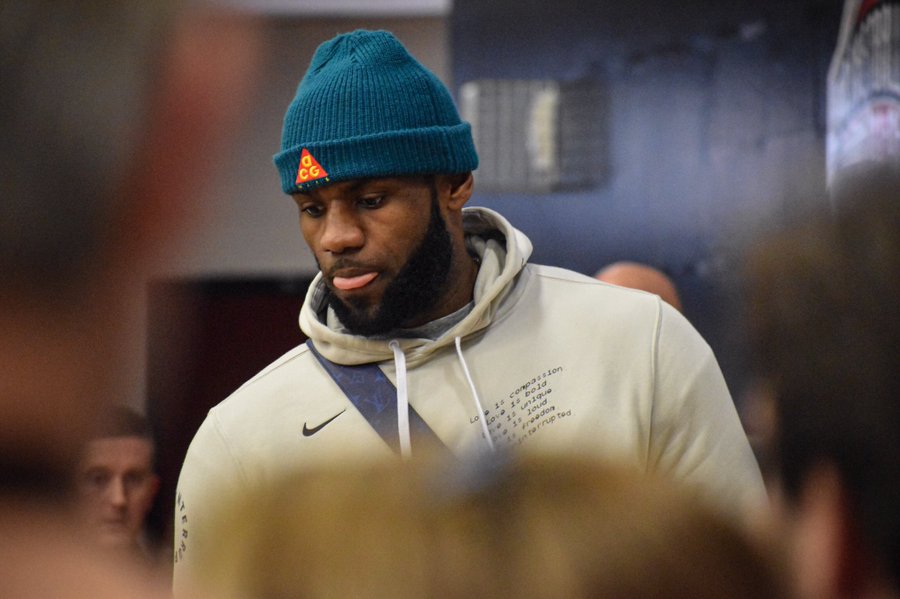 By ADAM ZAGORIA SPRINGFIELD, Mass. — LeBron James triggered a circus-like atmosphere by walking into Blake Arena Monday afternoon to watch Bronny James and Sierra Canyon (CA) in the Hoophall Classic. The schedule worked out so that LeBron and the Lakers were slated to play the Celtics in Boston Monday night. Hours after Bronny and Sierra Canyon lost to Paul VI (VA), 70-62, LeBron and the Lakers were hammered by the Celtics, 139-107 in Boston. “The only bad thing about today is that I took two L’s,” LeBron said after the NBA game, according to Jeff Goodman.

.@KingJames is in the building to watch Sierra Canyon 🙌 pic.twitter.com/lc9dfY5KgO

At the Hoophall, LeBron sat — and stood — courtside surrounded by a slew of local police offers and security personnel. The game played before about 4,000 fans in a standing-room only gym was not without incident. During the third quarter, a fan threw something at Bronny as he inbounded the ball. The official called security over but no one was ejected.

Game was stopped and security was called out immediately to remove a fan that threw a yellow starburst or a piece of trash at Bronny James in the 3rd quarter.

Hating has no age limit! 🤦🏾‍♂️. #JamesGang is build for it and well equipped. As we proceed 👑 https://t.co/6OzvGTxDEW

Paul VI (VA) ended up winning the game behind 24 points from junior Trevor Keels and 16 points and 7 assists from Duke-bound guard Jeremy Roach. Kentucky-bound wing B.J. Boston led Sierra Canyon with 20 points and 67 rebounds. Bronny James, a 6-foot-2 freshman guard who comes off the bench, managed just one rebound with no points and no assists in 12 minutes. The gym was oversold well beyond capacity and people stood on stairwells and several rows deep to get a look at James and the game itself. “Let’s go Celtics,” one fan yelled as he unsuccessfully tried to get a chant going. “I love you, Bronny,” one young girl shouted in the second half. On the other end of the gym, a large group of college coaches including Kentucky’s John Calipari and UNC’s Roy Williams sat watching the action.

This sequence from Sierra Canyon had Bron hyped 👏 pic.twitter.com/S6J1md76nm

Go ahead, get right King 👑🕺 pic.twitter.com/0ap0sOoJZ6

LeBron has made a habit of watching Bronny play in AAU and high school games when he can. Last month he watched as Bronny scored a go-ahead layup against St. Vincent-St. Mary, Lebron’s alma mater, in Ohio This story has been updated. Photo: @McFarland_Shawn Follow Adam Zagoria on Twitter And Like ZAGS on Facebook