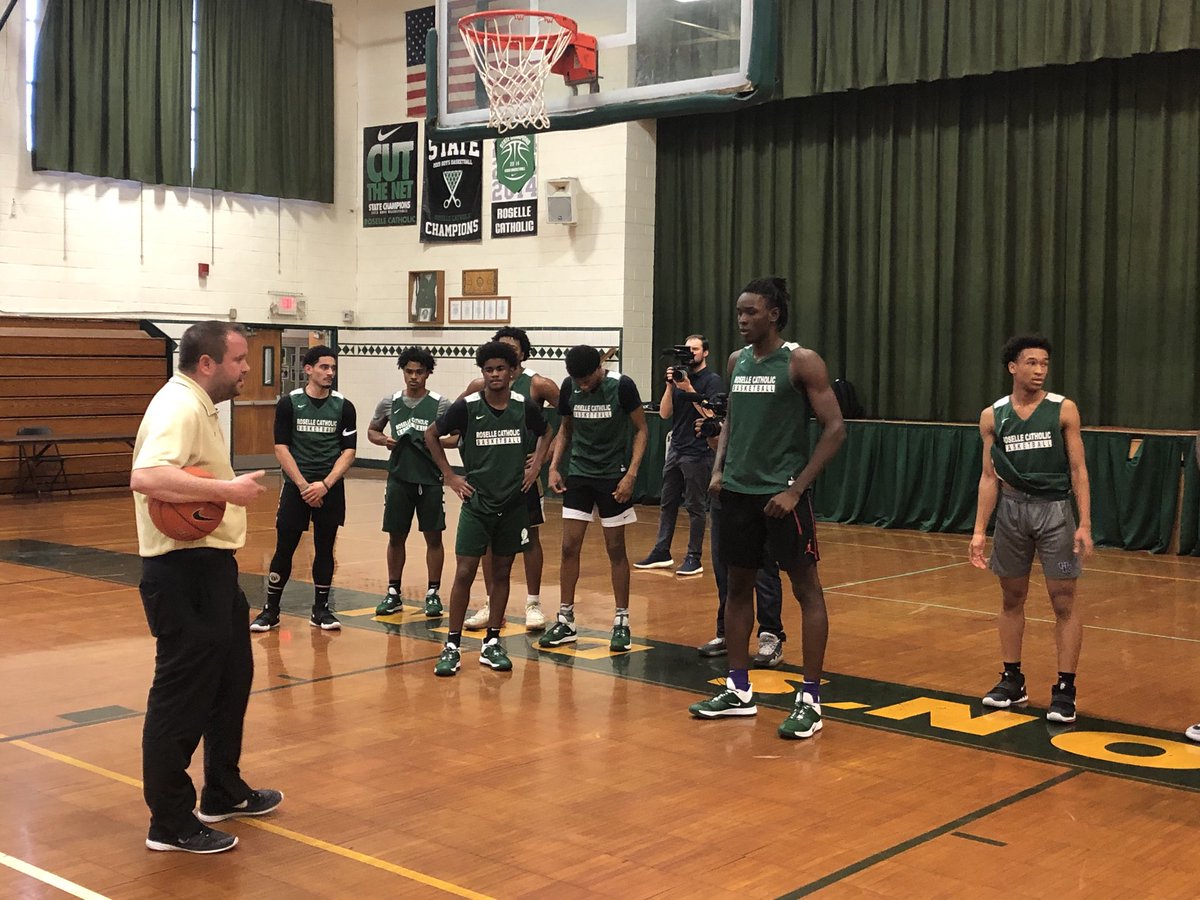 By ADAM ZAGORIA ROSELLE, N.J. — Cliff Omoruyi is in no hurry to make a college decision. The 6-foot-11, 236-pound Nigerian big man said Tuesday his goal is to win the New Jersey Tournament of Champions title in late March and then make a college choice. On Monday, the Roselle (N.J.) Catholic big man officially announced a final five of Arizona State, Auburn, Kentucky, Rutgers and UConn. That makes two Hurley brothers — Danny and Bobby — involved in his recruitment, along with Auburn’s Bruce Pearl, Kentucky’s John Calipari and Rutgers’ Steve Pikiell.

During an interview before practice, Omoruyi broke down his remaining five schools. Rutgers: “Rutgers is pretty cool. They got a new [practice] facility which can help you as a player, skill-wise and everything. Rutgers has been there since day one, since my freshman year when I started playing basketball, they’ve been there. “And they’ve got a good good engineering program. They’ve got a player Myles Johnson who studies engineering.” Omoruyi said he hasn’t spoken to Johnson, though. Cliff’s been to several Rutgers games, including the 20-point blowout of Seton Hall at the RAC. When he attended Wednesday’s win over Indiana, he was serenaded with chants of, “We want Cliff.” Read about it here. “They always shout, ‘We want Cliff, we want Cliff,'” he said. “Sometimes I’ve been laughing a lot.” UConn: “UConn, them going in the Big East is great because they’ve won four national championships. That’s great. Big East is a good [league]. “One of their messages is that they really need a big man who can run the floor, rebound, assist and block shots. They really need me.” Arizona State: “I know [assistant] coach Rasheen Davis. Just as Rutgers was there from the beginning, he was there because he was [an assistant] at UMass. So I’m familiar with him.” Davis also attended school in New York with the wife of Omoruyi’s guardian. Asked what it’s like having both Hurley brothers recruit him, he said, “Both of them, they want an athletic, aggressive center.” Auburn: “Auburn’s a pretty good school. I visited, it was fun. I love everything about Auburn, the fans, the students, the family, the way that they treat each other as family. [Coach Bruce Pearl] puts God before everything.” Kentucky: “Everybody wants to go to Kentucky because if you want to play the best level, that’s the school you go to. Playing for coach [John] Calipari and Kentucky is a great opportunity. Everybody wants to play there.” Omoruyi also said Kentucky pledge Devin Askew was in his ear at the Cancer Research Classic in West Virginia. “He said if you want to get easy buckets, he will pass me the ball,” he said. Kahlil Whitney, Omoruyi’s former RC teammate, is a freshman at Kentucky now but Omoruyi said “once in a while we talk. We don’t talk about college, we just talk about how he’s doing” Omoruyi says all five schools reach out to him “once a week” and he doesn’t plan on taking any more officials until after the season. He has only visited Auburn officially. He has visited Rutgers and UConn unofficially. “Yes, after the season I plan on taking one visit at a time,” he said. “After I win the TOC.”

Rutgers and Arizona State were both on hand last month when Omoruyi notched the first triple-double with blocks in the history of the Slam Dunk to the Beach event. RC coach Dave Boff said although Omoruyi is known as a shot-blocker and dunker, he continues to expand his game offensively. “Cliff is really improving by leaps and bounds all the time,” said Boff, whose program has won three TOC titles since 2013. “I’m fairly certain he’s the premier defensive player in the state of New Jersey and might be the best defensive player we’ve ever had here, which is saying something. “The way he rebounds the ball, the way he blocks shots, the way he helps us when we make mistakes on the perimeter really saves us and then offensively he’s continued to improve his game. He’s expanded his back-to-the basket game and added a 15-footer. He can do a lot of stuff on the offensive end and we have to do a good job of getting him the ball here the rest of the way.” Omoruyi says he can shoot the 3-ball, too, but isn’t emphasizing that now. “I can shoot the 3 but now it’s not my strong point,” he said. “I get inside close to the basket.” Meantime, academics will play a very important role in Omoruyi’s college decision. He wants to study engineering in college “Yes it’s important to me and it’s important to my coach,” he said. “Every time that’s the first thing I ask about, engineering, about alumni.” Said Boff: “I think it’s hugely important. It’s something he’s really going to look into. “Every conversation I have with him about the colleges, he’s always talking about who has the engineering program that he’s looking for and who can help him achieve those goals off the court. So I think that’s something that’s going to be very important when push comes to shove and I think he’s going to make a great decision for him and his family.” Follow Adam Zagoria on Twitter And Like ZAGS on Facebook

Zion Harmon's dad says Seton Hall visit 'blew us out of the water,' reclass and college decision likely by March 12