Bill Self on Kansas loss to Baylor: 'We got our ass handed to us today' | Zagsblog
Follow @adamzagoria

Bill Self on Kansas loss to Baylor: ‘We got our ass handed to us today’ 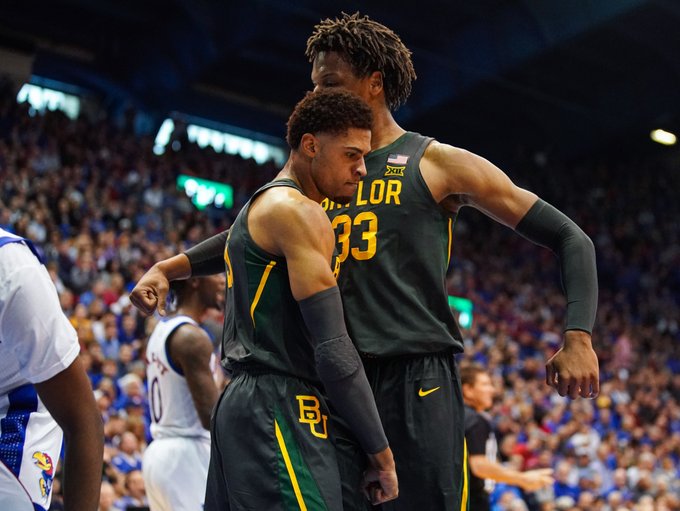 By JACOB POLACHECK No. 4 ranked Baylor defeated No. 3 ranked Kansas on Saturday by a score of 67–55, giving them their first ever victory at Allen Fieldhouse. Prior to Saturday’s victory, Baylor was 0-16 at Allen Fieldhouse. The loss ends Kansas’ 26-game home winning streak dating back to the 2017-18 season. Jared Butler scored a game-high 22 points and MaCio Teague added 16 as Baylor controlled the game throughout. Kansas struggled as guard Devon Dotson left the game with 19:19 left in the second half and Kansas down 13 points due to a hip injury. He returned with 8:53 left and KU down by 10. With the win, Baylor moves to 13-1 (3-0 Big 12) on the year, with their only loss coming against Washington in the Armed Forces Classic on November 8. The Bears have been impressive in early Big 12 play with a blowout home win over Texas in the conference opener followed by an impressive road win against Texas Tech on Wednesday. With the loss, Kansas moves to 12-3 (2-1 Big 12) on the year. In addition to Baylor, the Jayhawks have also suffered losses to Duke and Villanova. This story has been updated. Follow Jacob on Twitter Follow Adam Zagoria on Twitter And Like ZAGS on Facebook