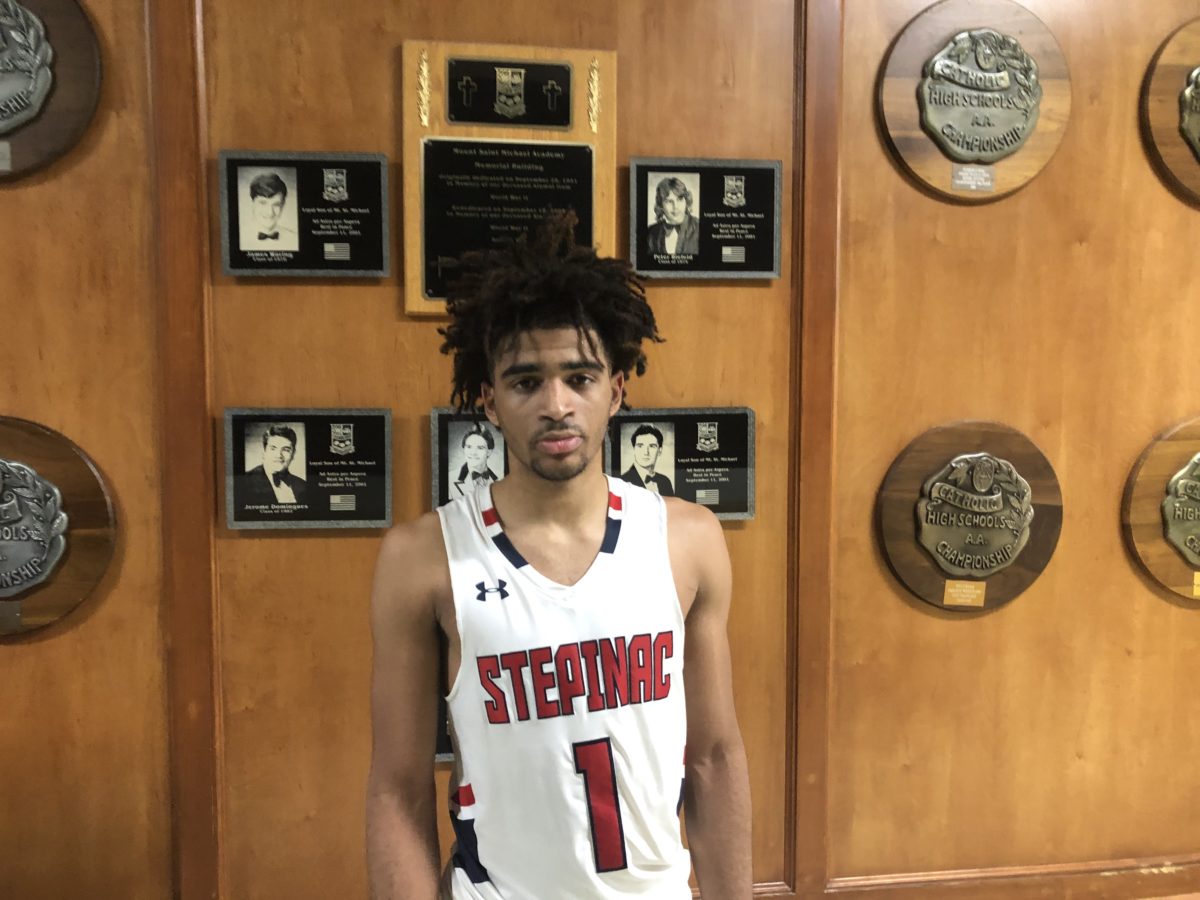 By ADAM ZAGORIA NEW YORK –– Rest easy, North Carolina fans. Help is on the way. “With the recruiting class we have coming in and with the team that we have there, the veterans, hopefully we’ll fix the kinks that we have now and just get a feel for each other and build that chemistry and see what it takes from there,” Archbishop Stepinac senior guard R.J. Davis told ZAGSBLOG Sunday after becoming the all-time leading scorer in Westchester County (N.Y.) history. The 6-foot Davis went for 32 points, 8 rebounds and 4 assists in an 81-68 loss to Rutgers Prep at the Empire Classic and now has 2,121 career points. He surpassed former Hackley star Danya Abrams. Davis remains on track to potentially challenge the New York Catholic League mark set by New York City legend Kenny Anderson. “It didn’t really occur to me as I played, I was just trying to do what I had to do to get my teammates the win,” Davis, who remains in the mix for selection to the McDonald’s All-American Game, said of breaking the record.

As for his future team, they have lost three straight, including Saturday’s stunning 79-76 home loss to Clemson that snapped Clemson’s 59-game losing streak in Chapel Hill. “I’ve had some great moments as a coach,” Carolina coach Roy Williams said of the game. “I’d say right now this is my lowest one. Losing this game was my fault. I told them if I die tomorrow or 20 years from now that will be the biggest regret I have in 32 years as a coach. These kids really needed a win. And their coach let them down.”

Also last week he said his current team — ravaged by injuries to star Cole Anthony and others — was “probably the least gifted team I have ever coached in the time that I’ve been back here.” Davis wasn’t able to see the whole game, but said. “We have a couple of injuries. The Clemson game we were up. I heard what happened. They’ll figure it out, though.” Davis, who runs with the NY Rens on the Nike EYBL circuit, is part of a five-man recruiting class ranked No. 3 nationally behind Kentucky and Duke by 247Sports.com. The class also includes 6-10 big man Day’Ron Sharpe, who is playing for No. 1-ranked Montverde (FL) Academy, which is already in the conversation for the greatest high school team ever. Stepinac coach Pat Massaroni — whose team also features Duke-bound Class of 2021 forward A.J. Griffin — said the Tar Heels are getting a winner in Davis, who chose the Heels over Pittsburgh, Marquette and Georgetown. “He’s a winner and that’s what he’s going to bring to them, the winning effort, work ethic, making winning plays,” he said. “He’ll have to adjust, probably won’t be on the ball as much but he could score it. He’s listed as a point guard, but he can really score. And that’s something you can’t take away from somebody. He’s going to play hard, he’s going to defend, he’ll make up for his size with his toughness.”

He scored 33 today in a losing effort pic.twitter.com/Ue25KzT8yJ

With Anthony a projected top-5 pick in the NBA Draft, Davis will be the next New York City-area guard to join the Tar Heels. Davis isn’t a projected one-and-done, but Massaroni says he has pro potential down the road. “Nobody thought that he would get to that level when he was being recruited, up until probably eight months ago,” the coach said. “Now he’s gotten to that, so I’m never going to doubt him in whatever he does. “People say that the NBA is not for him, I wouldn’t put it past him. I don’t know if it’s going to take one, two, three, four, five years, but he’s going to work to put himself in a position to get there and that’s something that he does really well. He works hard and the people at Carolina know that but they’ll be really, really surprised when they see that.” Meantime, Davis said he will “probably get a text message” from Williams soon commending him on breaking the record. As for his message to North Carolina and their fans “There’s a lot of ballgames to play, don’t worry.,” he said. “Coach and the rest of the team will figure it out so let’s finish out strong and stay together. That’s the main thing. Don’t’ worry too much about the critics and the outside noise. That’s the main thing.” Follow Adam Zagoria on Twitter And Like ZAGS on Facebook

Bill Self on Kansas loss to Baylor: 'We got our ass handed to us today'