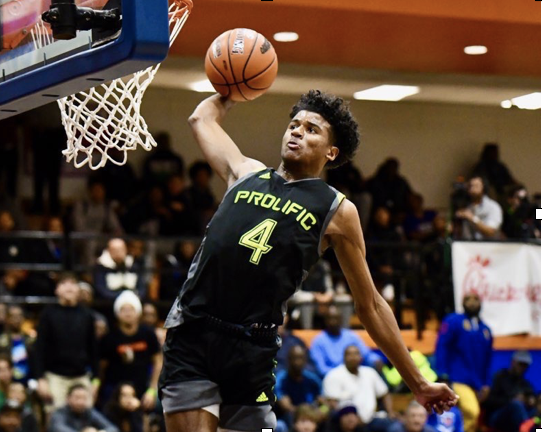 By KEVIN SCHNEIDER COLUMBIA, S.C. – There have been several memorable performances over the years by the nation’s top talents at the Chick-Fil-A Classic by the likes of Zion Williamson, James Wiseman and Anthony Edwards. Now you can add Jalen Green to the list. The five-star 2020 shooting guard of Prolific Prep (CA), ranked No. 3 nationally by ESPN, put on a highlight-reel showing throughout the Chick-Fil-A Classic in earning Most Outstanding Player honors. Green led the event at 28 points-per-game and connected on 15 made 3-point field goals to lead all performers. The 6-foot-5 high-flyer showed his elite athleticism with highlight dunks that went viral, wowed with his difficult shot-making ability and a knack to make clutch plays when the game was on the line that very few players in America can make.

After this type of performance, Green made a strong case for the No. 1 overall spot in his class. “I think I’m the No. 1 player in America because I can do it all and on top of that I’m a leader,” he said. “I lead my team.” Green is currently projected as the No. 3 pick in the 2021 NBA Draft, per ESPN.com. “He reminds me of a smaller version of T-Mac (Tracy McGrady),” ESPN’s national recruiting director Paul Biancardi said of Green. “A future pro shooting guard right there.” Green talked about the continued improvement to his skill-set and game. “I’ve been working on my half-court game, that’s been my main focus,” he said. “Just working on my handles and making reads off ball screens.” There were glimpses of McGrady from Green in his 34-point outburst vs. La Lumiere (IN), scoring 29 in the second half. He hit eight 3-pointers in the game with two to three guys contesting to make a late comeback from a double digit deficit. He came up short in the win column but it was a memory for coaches, scouts and fans in attendance they soon won’t forget.

RECRUITING UPDATE Green initially planned to announce on Christmas Day but has since opted to postpone his decision. “I decided to push my date back because I wanted to see how the colleges that are recruiting me do,” Green said. “See how the players there play and see how the coaches coach.” As for a decision timeline, he said, “Some time around March when the season ends.” Asked if he had a final list, Green responded, “I don’t have a final list. I’m open to anybody.” The programs that are predicted favorites are Auburn, Memphis, Oregon, USC and Fresno State. Auburn head coach Bruce Pearl and assistant Stephen Pearl were courtside on day one at the Chick-Fil-A Classic to check out the five-star guard. Memphis assistant Mike Miller also was in attendance eyeing their prime target. Recently he visited Memphis twice. Green talked about his relationship with Miller and coach Penny Hardaway. “Mike and Penny are family.,” he said “Family since my sophomore year since I received an offer. They keep it real.” On his growing relationship with Auburn’s Pearl, “He’s trying to get me so bad. He calls and texts me every day. He’s really trying to build that strong relationship in case it might happen.” Oregon has worked their way into the mix recruiting Green. “It’s the same thing as normal, they want me to be there,” he said. “I know Addison Patterson there from Team Why Not? I know CJ Walker. So I know a couple people that go there and they tell me it’s good there. Trying to build that relationship there too.” Green also visited USC as the Trojans look to add to No. 1-ranked Evan Mobley. “He’s trying to get me and Evan Mobley to team up down there,” Green said of coach Andy Enfield. “That’d be big time! The Mobley family is family. But anything can happen.” Green said playing overseas is also a possibility. He remains good friends with R.J. Hampton, who is currently playing in the Australia’s NBL and is a projected top-10 pick in 2020. “I talked to R.J. a couple times about it,” he said. “He said he enjoys it out there, likes it out there. It’s really good competition. But right now I think my route is to go to college instead of pro.” Follow Kevin on Twitter Follow Adam Zagoria on Twitter And Like ZAGS on Facebook