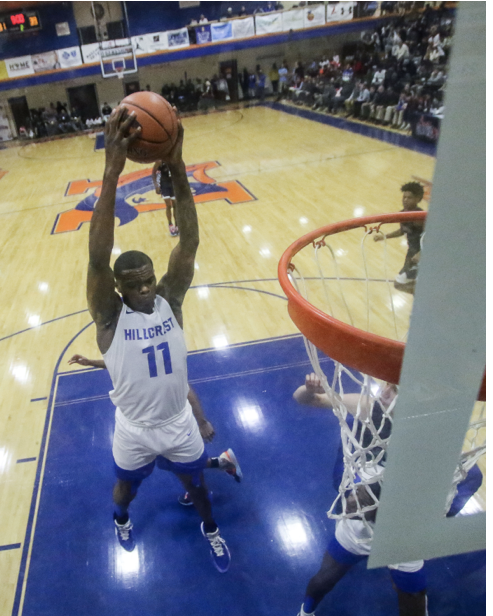 By KEVIN SCHNEIDER COLUMBIA, S.C. — The 2019 Chick-Fil-A Classic was loaded with the nation’s top talent in various classes with no one more imposing at both ends of the floor than 2021 five-star Mike Foster of Hillcrest Prep (AZ). Foster was named the tournament’s Most Valuable Player after going for 13 points and 10 rebounds in Hillcrest’s 55-44 win over La Lumiere in the title game on Monday. The 6-foot-8 2021 power forward, who currently ranks No. 7 in the ESPN Top 60, scored inside and out all week at the Chick-Fil-A Classic using his strong frame, athleticism and high motor en route to averaging 15 points and 9 rebounds per game. He continues to stretch his game feeling much more confident on the perimeter shooting and handling. A bulk of his scoring is done in the paint. Defensively, he can guard multiple positions, dominate the glass and be a rim protector. His main attribute is the will to make winning plays for his team. “Mike Foster plays the game inside-out and that’s what makes him good,” said ESPN’s national recruiting director Paul Biancardi. “He’s not only a double-double in high school, his game translates to a double-double guy in college.” Foster had two double-doubles in the three games at the Chick-Fil-A Classic. “Mike is very good with his back to the basket, especially at the mid-post. He’s a killer at that spot on the floor.” Hillcrest Prep director Nick Weaver commented on his star forward following winning the title. “People sometimes tend to forget Mike is only 16,” he said. “He’s a beast.”

RECRUITING UPDATE Foster’s recruiting is heating up as schools showing the most interest are Georgia, Michigan, Florida State, Arizona and USC, all of whom have offered. He holds over 20 offers from the likes of Maryland, Kansas, Ohio State, Michigan, Arizona, Florida State, Memphis, UCLA, Georgetown, Wake Forest, LSU, Arizona State, Texas A&M, Minnesota, Marquette, TCU, St,. Johns, Georgia and Houston, among others. Foster is still open at this point and has plans to take an official visit to Florida State after the season. Georgia’s head coach Tom Crean, LSU head coach Will Wade and Florida State assistant Steve Smith all made an appearance at the Chick-Fil-A Classic to check out Foster. Michigan head coach Juwan Howard has came on strong as of late this week. A bright future is ahead for the star 2021 power forward and the elite programs are quickly making him a prime target. Follow Kevin on Twitter Follow Adam Zagoria on Twitter And Like ZAGS on Facebook