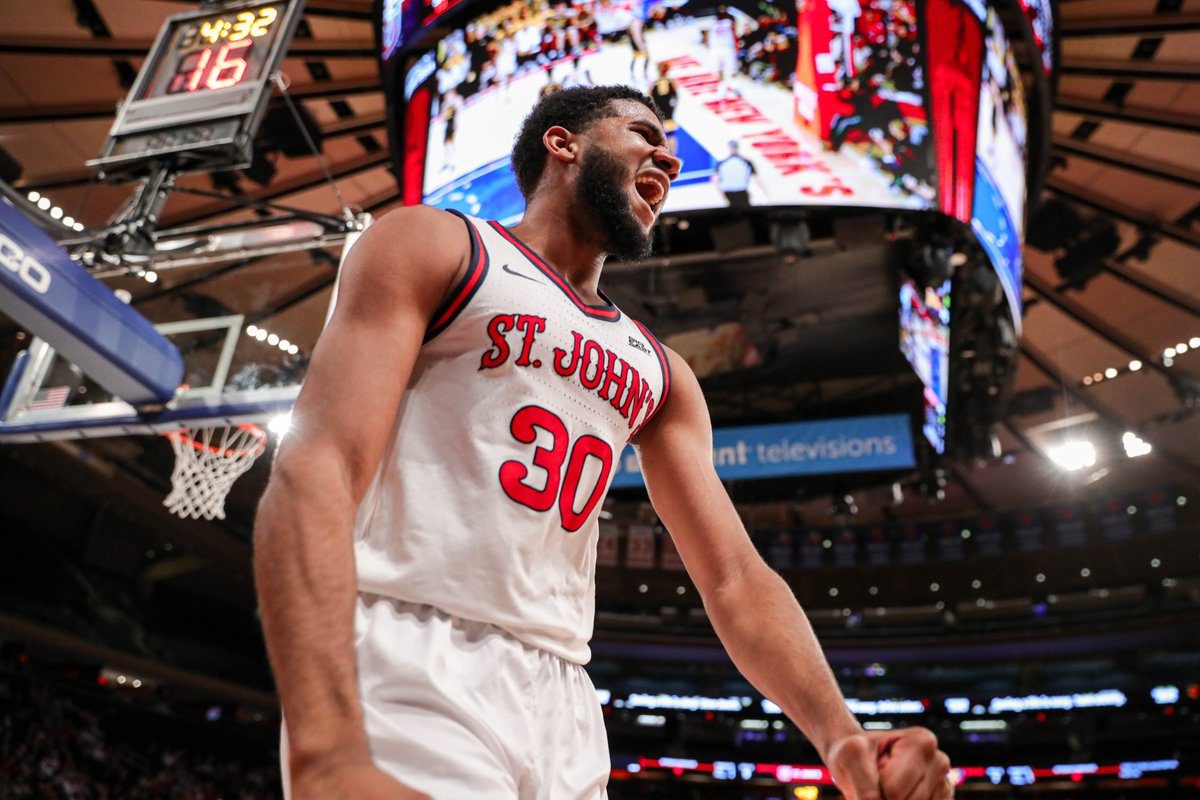 By ADAM ZAGORIA NEW YORK — One day after the Knicks fired David Fizdale amid a 4-18 season, Madison Square Garden’s other main tenants gave New York basketball fans something to cheer about. St. John’s fended off previously unbeaten West Virginia, 70-68, in the Big East/Big 12 Battle for coach Mike Anderson’s first Garden win. St. John’s is now 1-0 at MSG this month, while the Knicks fell to 0-3 after losing to the Pacers, 104-103, later Saturday night. “I just feel just happy for coach, his first win here so big ups to him,” said guard Rasheem Dunn, who hit two foul shots with 5 seconds left to get the win. It was Dunn’s first game at the Garden since Thomas Jefferson won the PSAL title over Lincoln in 2016. “What a great way to start our first game here at Madison Square Garden,” Anderson said. “The crowd was really involved.”

After St. John’s led 68-61, West Virginia ran off seven unanswered points off several steals to tie the game. Dunn was fouled on a drive to the basket with 5 seconds left and then calmly made both foul shots to put the Red Storm (8-2) up 70-68. He scored 12 of his 13 in the second half, when St. John’s outscored West Virginia, 34-32. Dunn played high school ball at Thomas Jefferson High School with former St. John’s star Shamorie Ponds and then transferred over from Cleveland State, and was given a waiver to play last month. “That’s the reason I came here,” Dunn said. “I felt like I could play on the big stage. I thank Mike Anderson for taking me in as family. “We get up 500 free throws a week individually and as you can see today it paid off.” West Virginia coach Bob Huggins took a timeout but the Mountaineers missed on their last-second shot. “Mike’s a very good coach, I told our guys they were going to be prepared and we just really didn’t do a good job,” Huggins said. “They really competed, we didn’t rise to their level of aggression. We didn’t rise to their level of competitiveness.” L.J. Figueroa scored all 17 of his points in the first half but got help in the second from Dunn and Nick Rutherford (13). “When you win it’s always good,” Anderson said. “I thought our guys fed off the fans here. It was a very good experience in terms of how our guys performed. “That was the best opponent our team has played and our guys rose to the occasion.” Huggins had high praise for Anderson, saying “Mike’s had success everywhere he’s ever been and “Mike can recruit.” He said it doesn’t matter that he’s not from New York. “When you win, they don’t care who you are,” he said. “When you win, they’re going to come.” Photo: @stjohnsbball Follow Adam Zagoria on Twitter And like ZAGS on Facebook