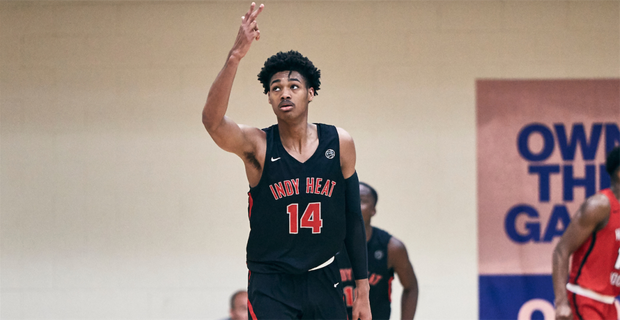 By ADAM ZAGORIA D’Andre Davis, the 6-foot-5 small forward from Indianapolis (Ind.) Lawrence committed to Louisville following his official visit this weekend. Assistant Luke Murray was the lead recruiter on Davis, ranked the No. 21 small forward in 2020 by 247Sports.com.

A former Nebraska commit, Davis re-opened his recruitment on Oct. 13 and also considered Xavier and Purdue. “Coach [Chris] Mack is a great coach who knows what he’s doing,” Davis told 247Sports. “He knows how to develop players and push them to reach every goal they want. The support is through the roof. They made me feel love and wanted and it’s somewhere I can see myself being for the next four years.” Davis averaged 17.9 points and 6.1 rebounds playing for the Indy Heat on the Nike EYBL circuit. “I see myself being able to be moved around in different positions on the offensive and defensive side of the ball because of my versatility and length,” Davis told 247Sports. “I feel as though I can be used to knock down threes get to the rim and have the between . I can guard faster guards and bigger wings. to using screens and moving and cutting without the ball which I see is something they do a lot.” He joins 6-6 JUCO standout Jay Scrubb in Louisville’s 2020 class. Photo: Jon Lopez/Nike Follow Adam Zagoria on Twitter And Like ZAGS on Facebook

Javonte Brown-Ferguson down to three schools, will announce Wednesday