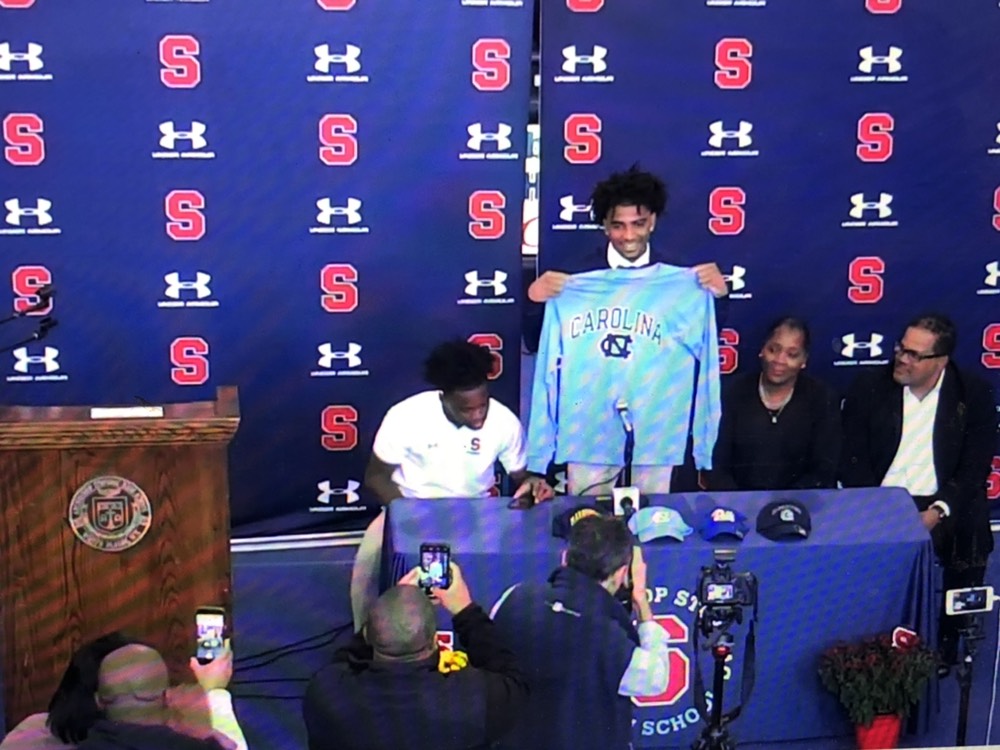 By ADAM ZAGORIA R.J. Davis is headed to one of the most storied programs in the history of college basketball. On his 18th birthday, the 6-foot-1 ranked the No. 7 combo guard in 2020 by 247Sports.com, committed to North Carolina on Monday morning at Archbishop Stepinac High School (N.Y.). Davis chose the Tar Heels over Georgetown, Marquette Pittsburgh. He had 29 Division 1 offers from which to choose. “Next year I’ll be committing to University of North Carolina,” he said.

“They’re trying to recruit two guards because obviously Cole [Anthony] is projected to go to the NBA, so they’re looking for two guards to come in and play alongside each other,” Davis told me last month. “They’re recruiting Cade Cunningham and Caleb Love. I know they feel that was a downfall last year with Coby White being their only point guard, to have two guards next year.” Love committed to the Tar Heels on Oct. 1, and they still remain involved for Cunningham, who is also considering Kentucky, Florida, Oklahoma State Washington. Davis is the fourth commit for UNC’s 2020 class. He joins forces with Love, Day’Ron Sharpe and Walker Kessler. They still are pursuing five-stars Cunningham, Williams, Greg Brown and Bryce Thompson.

Davis holds a 3.8 GPA, is a member of the National Honor Society, the Stepinac Ambassador Club and is a three-year starter on the varsity team Last season as a member of the NY CHSAA ‘AA’ City runner-up team, he averaged 25.4 points, 7.0 rebounds, 4.9 assists and 1.7 while leading the league in scoring. In 89 career games, he has scored 1,810 career points which the all-time Stepinac scoring record. He currently sits 811 points behind Kenny Anderson in CHSAA all-time scoring. “R.J. has an unbelievable upside and potential as he transitions into the college game,” Stepinac coach Pat Massaroni said. “His ability to shoot the ball at a high level, make plays for others and rebound makes him an elite level player.” “We are beyond excited for him to commit to UNC today. Such a storied program. He deserves this day and we are very excited for him.”

R.J. Davis, who turned 18 today, of @step_basketball & @NYRhoops said he knew by Tuesday where he wanted to go..
Discussed Cole’s message to him, what he hopes to bring to UNC,
Wants to work on beforehand,
Being ranked “around 200 six months ago,”
Being Considered a combo (1/4) pic.twitter.com/Ylug5WenE0

This year on the EYBL circuit, he went for 20.6 points, 4.4 rebounds, and dished out 3.5 assists in 18 games played for the NY Rens. “R.J. is one of the most efficient guards that I have ever coached,” Rens coach Andy Borman said. “His ability to put up big numbers on a small number of shot attempts is truly exceptional. He is a big-time scorer off the ball, but also is a very good decision maker and teammate. “R.J. has to be one of the best shooters in the country off the catch and also off the dribble. He is also a very team-friendly player, so he can play a true point, but can also play beside a point guard as a combo guard. And I think that is how they see him pairing up with Caleb Love at UNC next year.” Follow Adam Zagoria on Twitter And Like ZAGS on Facebook