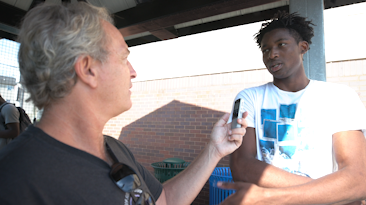 By ADAM ZAGORIA ELIZABETH, N.J. — Jonathan Kuminga has hosted a slew of high-major head coaches so far this fall, but says he remains wide open in his recruitment. Kentucky’s John Calipari, Auburn’s Bruce Pearl, LSU’s Will Wade Nebraska’s Fred Hoiberg have passed through the Patrick School in Hillside (N.J.) for Kuminga, ranked No. 1 overall in the Class of 2021 by 247Sports.com. Duke is also involved but has yet to see him this fall. “Everybody’s still recruiting me,” he told me on Sunday after putting up 19 points, 5 rebounds and 3 assists as the Patrick School beat rival Roselle Catholic, 68-57, in a Fall League game. “I’m just going to wait until I make the right decision, I don’t know when.”

Kuminga, who turned 17 on Oct. 6, is currently in the Class of 2021 although he has the option of reclassifying to 2020. He dominates high school opponents so much now, it’s hard to imagine he would even be challenged by another year of high school next year.

Still, he hasn’t put into motion any plans to reclass as of yet. “He hasn’t given an inclination,” said Patrick school coach Chris Chavannes, whose team is favored to win the New Jersey Tournament of Champions title after adding Kuminga and 6-10 forward Adama Sanogo. “He’s got the pressure of whether to reclass up and all this other stuff and he just wants to be a kid every day. That’s all he wants. He’s just taking it one day at a time.” is currently projected as the No. 6 pick in the 2021 NBA Draft, per ESPN.com. He would be eligible for that draft because he turns 19 that year. It’s also possible he could enter the 2022 NBA Draft if he opted to wait until then. Follow Adam Zagoria on Twitter And Like ZAGS on Facebook