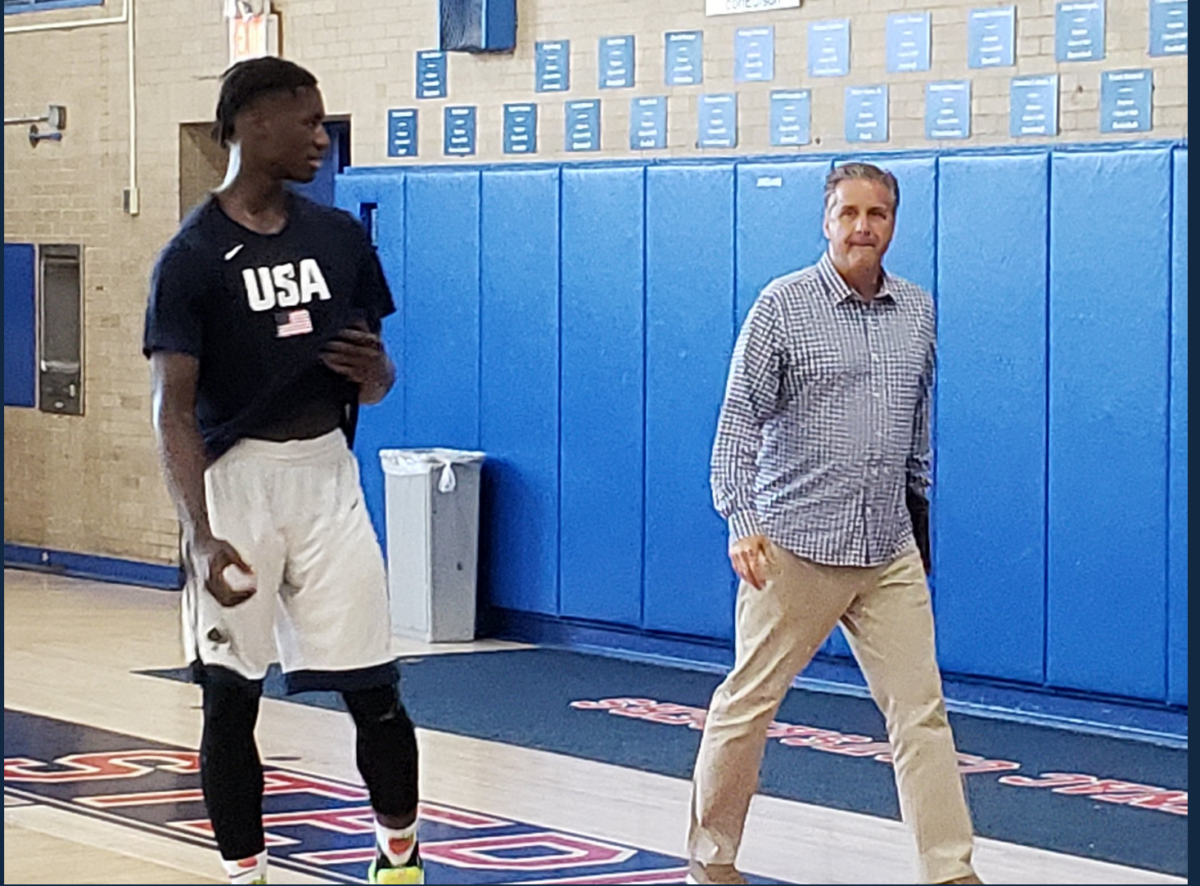 By ADAM ZAGORIA WHITE PLAINS, N.Y. — Kentucky head coach John Calipari and Villanova’s Jay Wright on Wednesday became the latest high-profile coaches to at Archbishop Stepinac High School for A.J. Griffin. Duke coach Mike Krzyzewski and two assistants watched the 6-foot-7 Ossining, N.Y. native two weeks ago. He is the No. 10- ranked player in the 2021 ESPN 60 and the son of Toronto Raptors assistant coach Adrian Griffin. In June, the 16-year-old Griffin, who runs with the PSA Cardinals AAU program, picked up offers from Duke, Kansas, Villanova, Michigan Vanderbilt — in one day. Kentucky has now seen Griffin twice this month after assistant Tony Barbee saw him Sept. 16. No offer was extended by Kentucky, but they want to continue to recruit him. “I think they want to build a relationship,” Stepinac coach Pat Massaroni said of Calipari. “This is the first time they’ve met in person.” Of a potential Kentucky offer down the road, Griffin said, “That would just mean a lot to me, especially for my school and to get the feel of that school when I go and visit.”

Asked his impression of Kentucky, Griffin said, “My impression is that they have guys who are committed to the game, like De’Aaron Fox and Malik Monk, those are two of my favorite players.” Griffin said he and his mother, Audrey Griffin, are planning on attending Duke’s Countdown to Craziness on Oct. 18. He said he also hopes to visit Kentucky and Villanova. “I plan on taking visits, that will be a fun experience,” he said. Villanova previously went three deep with assistants for Griffin while Wright was with Team USA in China, and now the head coach came back to see him. “That means they really like my game, they’re really into me and they want to recruit me and want me to come to the school,” Griffin said of Villanova. Villanova is known for recruiting program players that often stay three or four years, while Kentucky is known for producing a lot of one-and-dones. Griffin said the differing approaches don’t really matter. “The only thing that matters to me is just winning, I just want to win,” he said. Said Massaroni: “I think Villanova’s message also is if you’re a one-and-done, two-and-done, three-and done, we’re here to have you win and have you get better and develop and be mature enough and skilled enough to be successful at the next level. “As much as they haven’t had one-and-dones like Kentucky has, they understand what his potential is.”

Massaroni called Wright and Calipari “two of the most successful college coaches in the history of the game, two of the brightest minds in the history of the game and two of the guys who have adapted to what’s going on in today’s basketball world.” Griffin missed some time last season with a foot but came back to help the USA Basketball U16 win a gold medal at the FIBA Americas Men’s U16 Championship in Brazil in June. He suffered a strained back when he dove for a ball in the gold-medal game against and then missed Peach Jam with the PSA Cardinals. “I definitely feel stronger and more confident in my game,” he said. “I added some better attributes to my game. I’m more of a vocal leader. My body is great.” Junior big man Malcolm Chimezie practices against Griffin every day. “The kid is a beast,” he said. “He can go anywhere. He’s strong, he’s relentless, he can shoot it, he has good size. He’s definitely an NBA player.” As for what he’s looking for in a school, Griffin said, “I want a great support group, people that really care for me and want me to succeed and be a better person.” Photo: Eugene Rapay Follow Adam Zagoria on Twitter And Like ZAGS on Facebook

Caleb Love is Down to Two