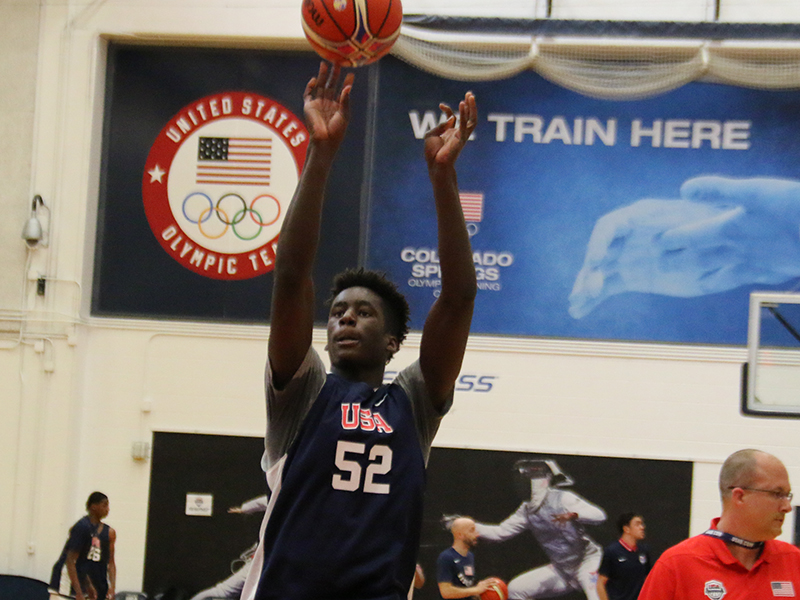 By ADAM ZAGORIA WHITE PLAINS, N.Y. — Duke coach Mike Krzyzewski could have chosen to be anywhere on the first day that college coaches were permitted to go out and visit with high school recruits. He and his assistants could have checked in with one of their committed Class of 2020 recruits, or gone to see a top uncommitted senior target. Instead, Coach K and assistants Nate James and Jon Scheyer were at Archbishop Stepinac High School to see Class of 2021 wing A.J. Griffin, the No. 11- ranked player in the 2021 ESPN 60 and the son of Toronto Raptors assistant coach Adrian Griffin. In June, the 16--old picked up offers from Duke, Kansas, Villanova, Michigan Vanderbilt — in one day. Kentucky has expressed interest but has yet to offer. “It just shows how much work I put in, to see that other people know my potential,” the 6-foot-7, 215-pound Ossining, N.Y., native said after an open gym that also drew the entire staffs from Georgetown and Pittsburgh for Griffin and his senior teammate R.J. Davis. “I talked to him over the phone,” Griffin added of Coach K. “He said, ‘I’m excited to recruit you, I see a lot of potential in you.'”

Griffin said he and his mother, Audrey Griffin, are planning on attending Duke’s Countdown to Craziness on Oct. 18 and he’s looking forward to it. “Yeah,” he said, “definitely.” During the open gym, Griffin displayed his vast skill set, hitting open jumpers, scoring in a variety of ways near the basket and throwing down several monstrous dunks. “I still play my same game, I still stay locked in,” Griffin said of playing in front of all the coaches. “I felt I played good, I got my teammates involved.”

Griffin missed some time last season with a foot but came back to help the USA Basketball U16 win a gold medal at the FIBA Americas Men’s U16 Championship in Brazil in June. He suffered a strained back when he dove for a ball in the gold-medal game against and then missed Peach Jam with the PSA Cardinals. “I definitely feel stronger and more confident in my game,” he said. “I added some better attributes to my game. I’m more of a vocal leader. My body is great.” Junior big man Malcolm Chimezie practices against Griffin every day. “The kid is a beast,” he said. “He can go anywhere. He’s strong, he’s relentless, he can shoot it, he has good size. He’s definitely an NBA player.”

Stepinac coach Pat Massaroni called Monday a “special day” for the program. “For one of the greatest coaches of all time, one of the most historic programs, to make it a priority to come see a player in your program, is a pretty special day for the school and the community,” Massaroni said. Massaroni said Coach K’s appearance in the gym could help some of his younger players, too. “They get to play in front of a slew of coaches, especially him, and I think there was just excitement among the Stepinac community and the student here,” he said. “But the young players get to see the level they could possibly get to one day and how hard they can work. We’re fortunate that A.J. being that talented brings him here, but our others guys might benefit by him reaching out to someone in his coaching tree that comes in in the future.” North Carolina coach Roy Williams is expected Wednesday at the school, and Kentucky may come at some point down the road. “We anticipate them to be here all fall and throughout the season,” Massaroni said of the nation’s top coaches. “Just unbelievable names and coaches and successful guys who are coming through the doors. These guys put in a lot of hard work and they’re reaping the benefits now.” Follow Adam Zagoria on Twitter And Like ZAGS on Facebook