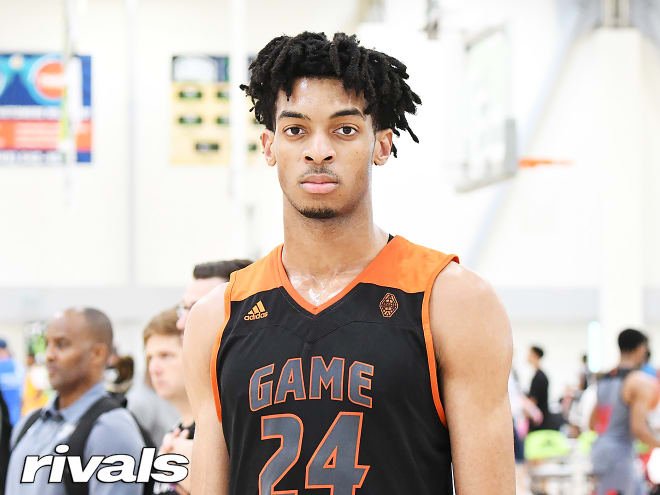 By ADAM ZAGORIA A parade of high-major coaches has trekked out to Prolific Prep in Napa, Calif., the past two weeks to see stars like Nimari Burnett, Jalen Green Frank Anselem. While Burnett and Green are planning on going to college in 2020, Anselem may go then as well. The 6-foot-10 big man from Suwanee, Ga., is currently the No. 9-ranked center in the Class of 2021 per 247Sports.com, but he is considering going to college in 2020. “Yeah I’m considering it, but it’s not a 100 percent done deal,” he told ZAGSBLOG. Since June, Anselem has picked up offers from Rutgers, USC, New Mexico, Arkansas, Georgia, Alabama, DePaul, Nebraska, LSU, TCU and Georgia Tech. Kansas coach Bill Self, Rutgers’ Steve Pikiell, LSU’s Will Wade, Auburn’s Bruce Pearl, USC’s Andy Enfield and Oregon’s Dana Altman have all seen Anselem in the last two weeks. He currently has official visits slated for Nebraska (Sept. 27-29) and LSU (Oct. 11-13). He said he’s also considering “USC, Georgia, Florida, Tennessee, Arizona, TCU, to name a few.” Whether he goes to college in 2020 or ’21, Anselem hopes to make an impact sooner than later. “I think my versatility on both sides of the floor can greatly change any college program,” he said. “On offense, I can operate from the high and low post and I’m also working to expand my game beyond the arc. “Defensively, I can switch and contain smaller guards, chase wings around and also guard the post, so I can do a lot of things.” Follow Adam Zagoria on Twitter And like ZAGS on Facebook