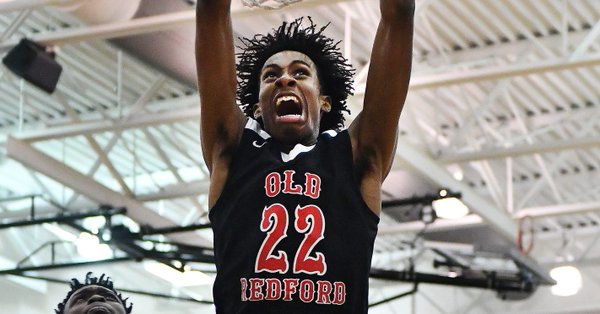 By ADAM ZAGORIA Isaiah Jackson, the 6-foot-9, 195-pound power forward from Waterford Mott High School (MI), remains wide open in his recruitment despite the fact that his 247 Crystal Ball is at 100 percent for Michigan State, his father told ZAGSBLOG. “That’s just so far from the truth, that’s just what media guys have been printing,” Wesley Jackson Sr., Isaiah’s father, said Wednesday by phone of the perception that his son is a lock to Michigan State. “Isaiah’s recruitment is open. Just about every school has voiced interest besides maybe North Carolina. That’s the only big school that we haven’t talked to.” Wesley listed Duke, Kentucky, Michigan State, Kansas, Arizona, Alabama, Maryland, Illinois and Oregon among those involved. St. John’s recently offered after head coach Mike Anderson watched him at Peach Jam. Jackson, who is ranked the No. 3 power forward in 2020 by 247Sports.com, spent last season at SPIRE Academy in Ohio alongside LaMelo Ball and Michigan State commit Rocket Watts. Now he’s headed to Waterford Mott, his fourth high school in four years. Playing with The Family at the Peach Jam last week, Jackson averaged 10.6 points and 5.6 rebounds and impressed a slew of coaches. He played in front of Duke’s Mike Krzyzewski, Kentucky’s John Calipari Michigan State’s Tom Izzo, among others.

Coach K reached out by phone before Peach Jam and spoke with both Wesley and Isaiah. “ and Isaiah spoke with Coach K about a week ago,” Wesley said. “They just stressed strong interest.” Kentucky has also been in contact. “We had talked the same as Duke, same as Alabama, same Maryland, Oregon, ” Wesley said. “You name it.” Isaiah Jackson also said Michigan State was a strong option. “Definitely,” Jackson the Detroit News. “They have a good history. Tom Izzo is a good coach and develops players to make it to the league (NBA). They have a good history with Magic Johnson and when he comes back he gets a lot of love. I went to a Michigan State football game as a 10th grader and Magic was there and he got a lot of love. If I was to go there, I think I’d get that same type of love.” As far as a visit schedule, Wesley said, “We’re going to put it together hopefully this week.” He added: “The board is basically blank right now.” Photo: DetroitNews.com Follow Adam Zagoria on Twitter And Like ZAGS on Facebook