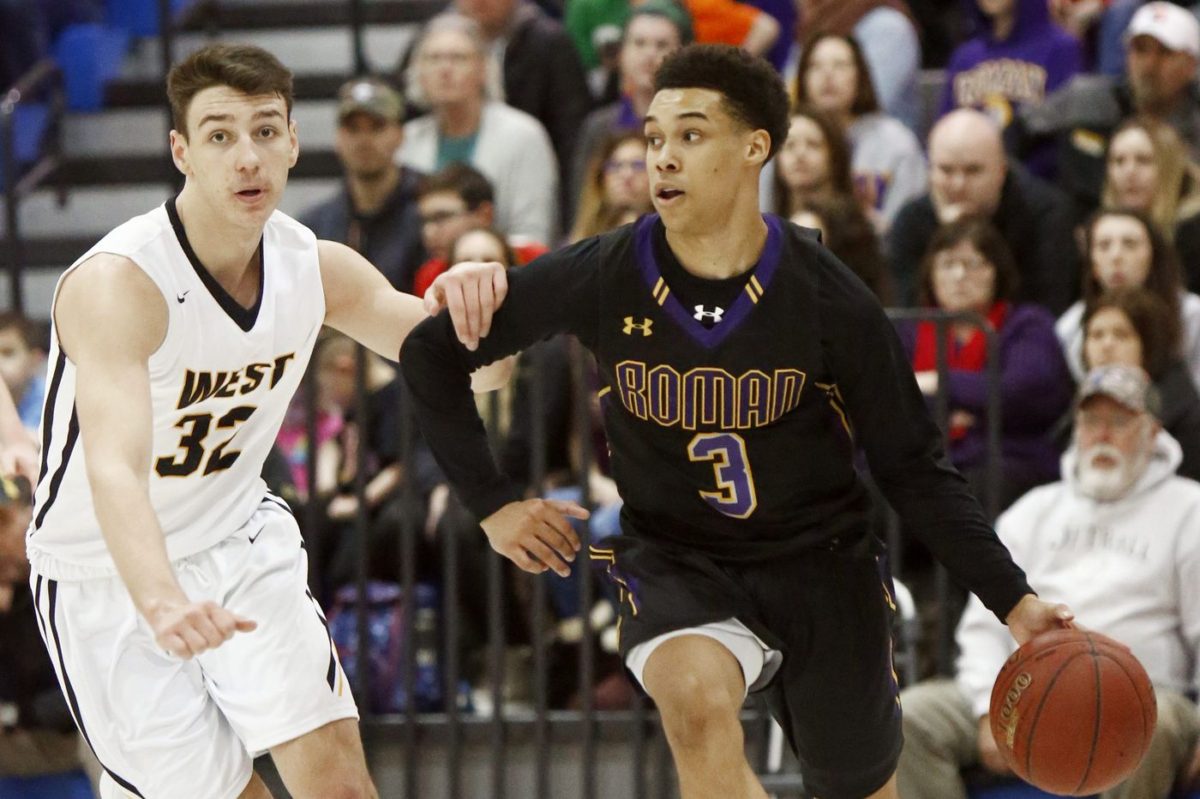 By RICH FLANAGAN PHILADELPHIA – When watching Roman Catholic (Pa.) this season, one aspect will become very apparent from the outset: Lynn Greer III is the unquestioned on the court. Heading into his third straight season as a starter and having been a main part of the rotation since his freshman year, the 6-foot-3 point guard is taking greater command of the Cahillites with the departure of Hakim Hart (Maryland) and Seth Lundy (Penn State). Greer III, who received an offer from the Nittany Lions before even stepping onto the court for Roman Catholic, scored 18 points and dished out three assists in the Cahillites’ 67-44 loss to the Patrick School at Philly Live II on Friday night. The four-star recruit is the No. 95 ranked prospect in the class of 2020, according to Rivals.com. He holds a number of offers but said Florida, Villanova, Wake Forest, Indiana and Miami (Fl.) are the schools that him the most. He has an official visit set to Florida Sept. 7-9, he told Pat Lawless. Villanova head coach Jay Wright was on-hand to take in Greer III’s performance against the Patrick School and the senior noted that Wright “has reached out to me directly.” Wright has ahistory of bringing in high-ranked recruits out of the Roman Catholic program, notably Maalik Wayns, who was a McDonald’s All-American in 2009 and played three seasons with the Wildcats. He also holds offers from Iowa, Oregon, St. Joseph’s and Temple, where his father played for five seasons and scored over 2,000 points. Greer III is set to announce his top five schools in the next few weeks but regardless of any new offers that come in, he’s going to take the process slow to find the most optimal landing spot. “I don’t worry too much about who’s offering me,” Greer III said. “I just want to play my best basketball and whoever decides to offer me, they’ll offer me. The school I’ll go to will be the best fit for me.” While playing alongside Hart and Lundy, Greer III helped Roman Catholic win two Philadelphia Catholic League titles and a PIAA Class 6A title in 2018. Despite the loss of those two, the Cahillites return a lot of talent including 6-10 sophomore Jalen Duren, who won a gold medal with the USA U16 team in Brazil earlier this month and was invited to the Nike Elite 100 camp, sophomore Justice Williams, who has also spent time with USA Basketball, and 6-7 sophomore Christian Kirkland, who transferred in from Friends Select School (Pa.). Greer III’s senior season holds more intrigue than merely where he chooses to play next. After his sophomore season, he chose to transfer to Oak Hill Academy (Va.), a program that has produced players such as Kevin Durant and Carmelo Anthony. After being enrolled for a few months, he chose to return to Roman Catholic before the start of his junior year. He was ruled ineligible to play in the state tournament due to a new PIAA transfer rule that was put in place prior to the season. Without Greer III, the Cahillites fell short of a second straight state title by falling to rival, La Salle in the quarterfinals. Now he’s focused on being the leader of the team and bringing this new group together. “I think we’re going to be a very good team,” Greer III said. “We just have to get to know each other a little bit more because there’s a lot of new guys. As we play together, we’ll get better.” Photo: LOU RABITO / Philly Inquirer Staff Follow Rich on TwitterFollow Adam Zagoria on Twitter And like ZAGS on Facebook