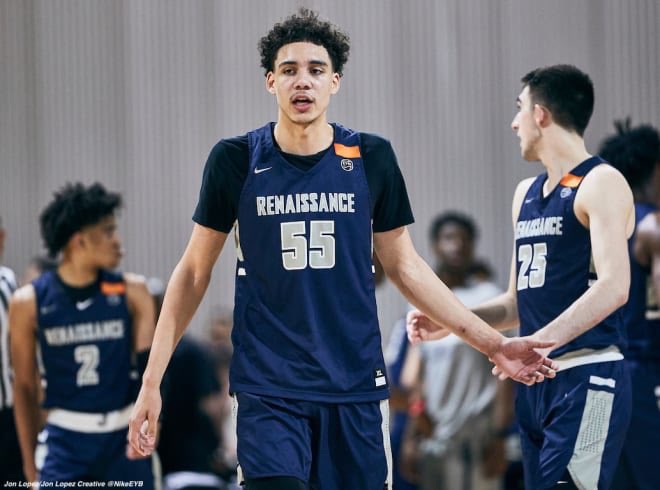 By RICH FLANAGAN PHILADELPHIA – When Rick Brunson was hired as the new head coach at Camden (N.J.) High School, he immediately told Lance Ware what he expected of him. The 6-foot-9, 220-pound forward, playing in a frontcourt which boasts 2021 forwards TaQuan Woodley and Jerome Brewer, will be called upon to control the paint at both ends. On Friday night, the four-star recruit in the Class of 2020 proved he’s more than up to the challenge. He posted a double-double with 16 points and 17 rebounds to go along with four blocks as the Panthers fell to Archbishop Wood (Pa.), 65-57 at Philly Live II at Jefferson University. Ware, who runs with the NY Rens on the Nike EYBL circuit, was a dominant presence under former coach Vic Carstarphen and wants to be even better for Brunson, who starred at Temple and played nine years in the NBA. “He expects a lot out of me,” Ware said. “I want to give him what he wants and what he expects of me, which is to play hard, rebound and block shots so that’s what I’m trying to do.”

Top 50 recruit Lance Ware (@lanceware12) has been on a recruiting TEAR as of late, picking up 4 offers from ACC schools (https://t.co/uVPNS1dfP0, Miami, VTech, Wake Forest) in the last 2 weeks! @YouGotTheHigh @NYRhoops pic.twitter.com/c3QpCmr6vW

Brunson was hired on June 5 and has already seen how Ware effects the game in a variety of ways. “Lance has turned himself into an energized player,” Brunson said. “He’s a rim-runner as well as a shot-blocker and rim protector. The best thing he does is be a high character player and a leader.” The versatile forward holds offers from UConn, Georgia Tech, Maryland, Ohio State, Miami (Fl.), Pitt, Seton Hall, Virginia Tech, Wake Forest and Temple, Brunson’s alma mater, among others. He’s taking every offer into consideration and doing his due diligence into looking at how each program fits how he plays. “What I do when I receive an offer is look at the school and try to see if their playing style fits me,” Ware said. “I don’t want to go into not knowing that. Every coach that recruits me is going to say, ‘You fit into our system’ but that might not be true all the time. I take it upon myself to do my own research and see if their game fits me.” After averaging 11.6 points per game and 9.6 rebounds per game as a junior for a Camden team that fell to eventual state champion Haddonfield in overtime of the South Jersey Group 2 final, Ware is primed for a big senior season. Brunson is allowing Ware to expand his game more on the perimeter but wants him to remain focused on the inside. “I truly believe all big guys should start inside,” Brunson said. “Still, he actually has the ability to bring the ball up. Right now, he won’t be doing that but during the season he will handle the ball a little bit. It all depends on the mismatch. He’s able to get the ball on the short post then go one on one because of his quickness and athleticism.” Ware is looking to continue to improve under Brunson and add more facets to his game. He’ll let his recruitment play out and make his decision when he’s had time to review every offer on the table. “I’m 100 percent open with every school and they’re willing to contact me,” Ware said. “I’m taking all of them into consideration.” Follow Rich on Twitter Follow Adam Zagoria on Twitter And like ZAGS on Facebook