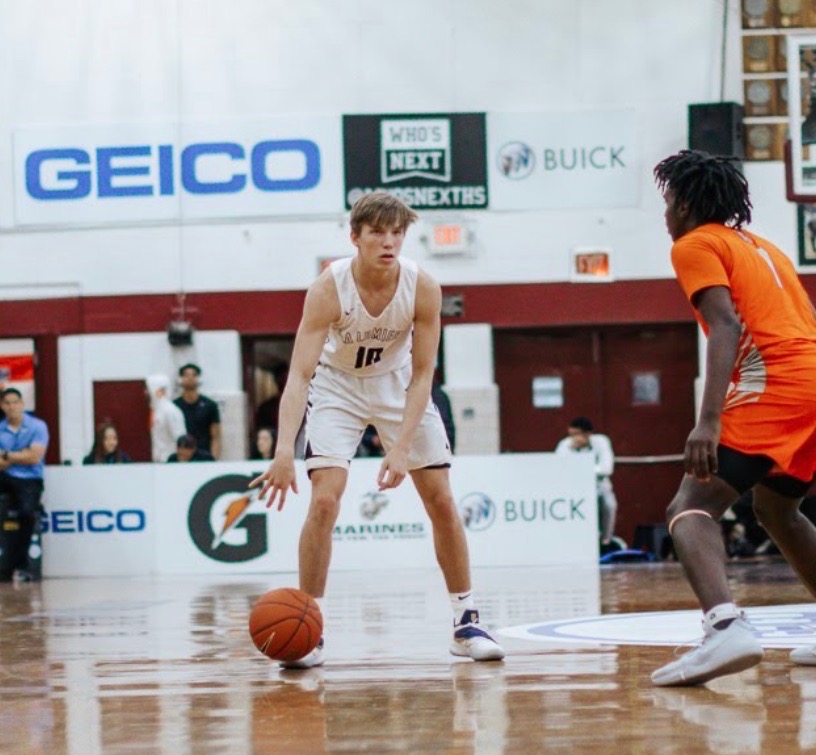 By JACOB POLACHECK Denham Wojcik, the 6-foot-1 point guard from La Lumiere (IN), broke down his recruitment for ZAGSBLOG Wednesday. Wojcik currently holds offers from schools such as Army, Bucknell, Loyola Chicago, Brown and Southern Illinois. Saint Mary’s, George Mason, George Washington, Baylor, Harvard, Yale, Northwestern, Davidson and Miami (OH) have all shown interest in Wojcik. He also received a call from Villanova on Tuesday. “Villanova’s assistant Mike Nardi called me to let me know they were going to see my play some more,” said Wojcik. “He saw me in Kansas City and was impressed. We’ll see what happens.” Denham’s older brother Paxson is an incoming freshmen at Loyola Chicago. He visited earlier this month. “I was there a couple weekends ago and I played pickup with their team,” he said. “Obviously, having my older brother there has helped me see Loyola more, as much as anyone else with an older brother there would. It’s pretty sweet so we’ll see what happens.” Denham’s older brother has had a major impact on his basketball career. “We used to play one-on-one growing up in Charleston, SC and that’s where I got my competitive edge,” said Wojcik. Wojcik also took visits to Davidson (June 14) and Harvard (June 15). He broke down each visit: Davidson: “Basically, my dad knows coach [Bob] McKillop. Their system would fit how I play and they also realize that. When I went down there, I saw that basketball is the main thing. Also, because of Curry, they have a pretty sweet deal with Under Armour. They’re going to keep on tracking me and everything, but I’ve got some time. That’s basically what interested me in seeing Davidson.” Harvard: “I like coach [Tommy] Amaker. I’ve been there before for the Elite Camps with Paxson. I went two years ago. I know the campus pretty well. Obviously, there’s the high-academic side to them, being in the Ivy League. I’m pretty sure they’re predicted to be top-25 in the preseason. Their basketball program, due to what coach Amaker has done in the last few years, has brought them to prominence. Everything that’s going on there is positive, which is what their pitch was to me. It’s a really nice city, good school and everything.” Wojcik will enter his junior year at La Lumiere this fall and doesn’t anticipate committing anytime soon. “I probably want to make a decision either a year from now, like what Paxson did or maybe even later,” he said. “Paxson made his decision before the July period of his last AAU go around. I probably want to commit in that timeframe. I’ll probably commit then or during the fall of my senior year. I want to be set and ready to enjoy my last high school season.” With time until he plans on making a decision, Wojcik says he is taking into account the coaching staff, the play style and his potential teammates. “Going on the officials, what’s most important to me are the guys on the team,” he said. “Location doesn’t really matter. I’ve lived all over the country, so that’s not really a facet. I’d like to also play at a pretty good academic school. It doesn’t have to be Ivy League but one that’s comparable to a Loyola Chicago, with good athletics and academics.” In addition to having his brother at Loyola Chicago, Wojcik’s father, Doug, is the recruiting coordinator for Michigan State’s basketball team. “The biggest part of having my father as a recruiting coordinator at Michigan State, is that I can go into the facilities, workout and train in the Michigan State gym,” he said. “He knows so many people, has so many connections and phone numbers, it helps me as far as knowing what coaches are going to call me in advance.”   Follow Jacob on Twitter Follow Adam Zagoria on Twitter And Like ZAGS on Facebook