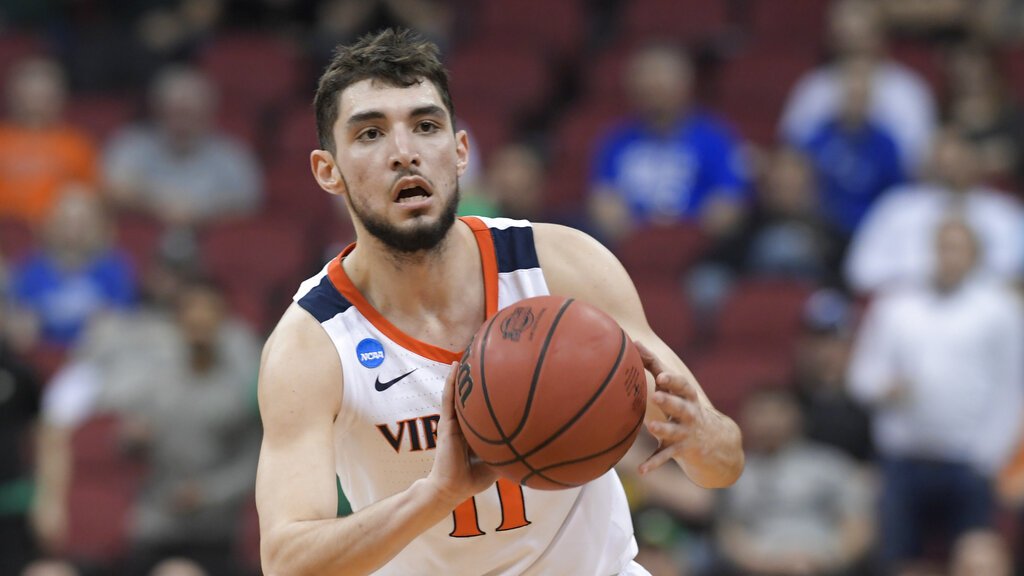 By ADAM ZAGORIA MINNEAPOLIS — Virginia coach Tony Bennett was recruiting at the Pittsburgh Jam Fest in the spring of 2014 watching one player on the New Heights AAU team when his eyes were drawn to a 6-foot-3 point guard competing against Markelle Fultz and the DC Blue Devils. Ty Jerome ended up leading New Heights to the championship over Fultz’s team, and Bennett knew he liked the kid. But he wasn’t completely convinced. “I kept saying, man, he’s really good, but in my mind, I’m like, no, no, he’s not moving that well,” Bennett recalled Thursday at the Final Four where Virginia will face Auburn in one national semifinal on Saturday. “I don’t know. But, man, he’s really good.” At that point, Jerome held scholarship offers from George Washington, Temple and Davidson, among others, but none of the big boys were yet involved for the Iona Prep (N.Y.) floor general.

Tony Bennett saw something special in Ty Jerome before a lot of others did and it’s safe to say he was right ?#Wahoowa⚔️ (@UVAMensHoops) pic.twitter.com/fsxIIW3YK4

“So I went back to my staff,” Bennett recalled. “The spring recruiting period was done, and I said, we need to at least check on this guy. Ty Jerome, I don’t think anybody is probably recruiting him, but I loved him. I don’t know, but that was it.” By July of that year, Bennett had forgotten about Jerome and was again watching another player when he saw Jerome compete at the 16U Under Armor Finals in Suwanee, Ga. “He hit a game-winning three-pointer at the buzzer in overtime of a quarterfinal game and [Bennett] offered right there,” recalled New Heights coach Chris Alesi. “I didn’t go to watch Ty, and he played like Ty played, and I told my staff, I’m locking in on that young man,” Bennett recalled. “There’s something there. I think he’s got a chance. And I bull-dogged him and followed him, and he kept making a believer out of me more and more.” The following weekend, Bennett changed his plans and followed Jerome and New Heights to Kansas City. “I think I was one of the only head coaches there,” Bennett said. “I knew it. When you see it, you know it, and I knew it. Not many were taking the chance on him.” Three weeks later, Jerome visited Virginia (he also visited George Washington) and came back raving about the campus and Bennett. By Sept. 2, he had committed. “The place is unreal,” Jerome said then. “The campus, the facilities, the arena are unbelievable. The coaching staff and players are terrific people. The confidence coach Bennett has in me and the way he spoke to me really got to me. He told me what I need to improve and exactly how I need to do it to reach another level. He also showed me exactly how I fit in the system using film and I just feel that I’m not going to find a better place. It’s the perfect fit.” Nearly five years later, Jerome and Bennett have helped lead Virginia to the school’s first Final Four since 1984. The 6-foot-5 Jerome went for 24 points, 7 assists, and 5 rebounds in Virginia’s overtime win over Purdue last weekend in the Elite Eight. For the season, the junior is averaging 13.3 points, 5.4 assists and 4.0 rebounds. The fact that this year’s run followed last year’s historic first-round loss to No. 16 UMBC only makes it that much sweeter. “To be the team that gets [Bennett] to the Final Four, I think that’s what means the most,” Jerome said. “But he’s believed in every single one of us. He has our best interest at heart, on and off the court. And he’s a great person. To finally quiet the critics feels great.”

“What I’m most excited for is to play this game on Saturday.” – Ty Jerome #FinalFour