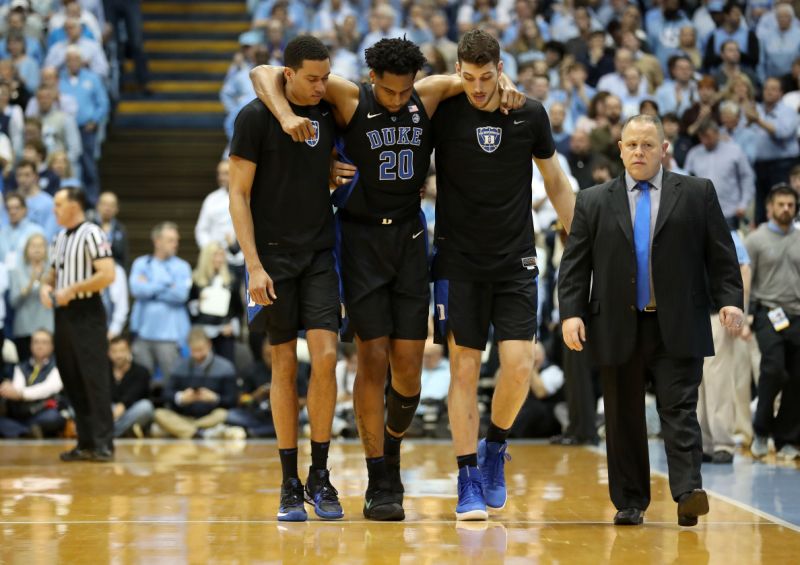 By JACOB POLACHECK Duke junior big man Marques Bolden will miss the ACC tournament this week due to an MCL injury he sustained Saturday in the opening minutes against North Carolina, head coach Mike Krzyzewski announced Monday. “There’s no way Marques will be ready for the ACC Tournament,” said Krzyzewski.  “Whatever grade [the sprain] is, he’s not going to be well in one week. We’ll see.” Bolden went down with the knee injury less than three minutes into Duke’s 79-70 loss to No. 3 North Carolina on Saturday while attempting to block a shot. The injury has been diagnosed as an MCL sprain. Duke freshman phenom Zion Williamson is expected to return for the ACC Tournament after missing the last six games with a mild knee sprain. Bolden is averaging career highs in minutes played (19.5), points scored (5.8), shots blocked (1.8) and rebounds (4.7) per game. Duke finished the regular season with a 26-5 record (14-4 conference) and will be the No. 3 seed in the upcoming ACC tournament.  The Blue Devils will play the winner of Syracuse and either Boston College or Pittsburgh. Follow Jacob on Twitter Follow Adam Zagoria on Twitter And Like ZAGS on Facebook