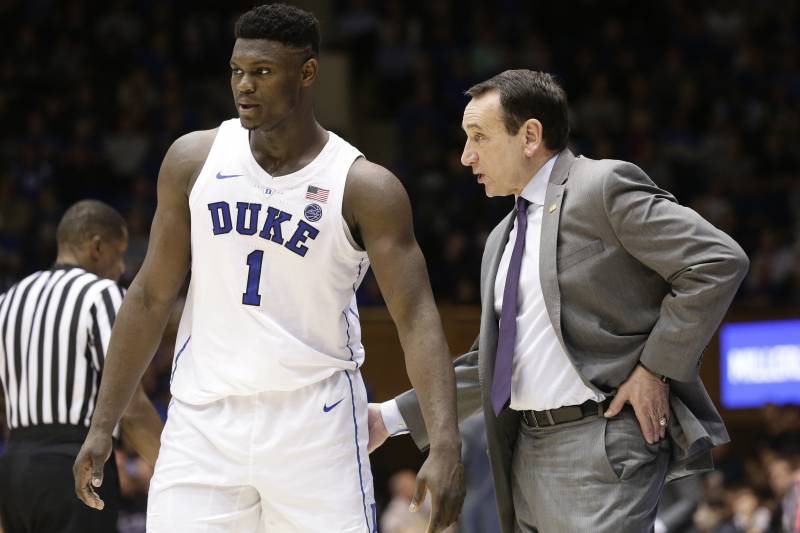 By ADAM ZAGORIA Duke coach Mike Krzyzewski says Zion Williamson likely won’t play in Saturday’s regular-season finale against North Carolina but will be ready for the ACC Tournament next week. “He’s getting more confidence, and we just have to get him in shape,” Krzyzewski said after No. 4 Duke edged Wake Forest, 71-70, Tuesday night. “I don’t think he’ll be ready for Saturday. I have to be careful not to push this, but I would be surprised if he wasn’t ready by the ACC tournament.” The 6-foot-7 Williamson is in the final phase of his recovery and has missed four games since spraining his knee Feb. 20 in a loss to North Carolina. He is the projected No. 1 pick in the NBA Draft and the Knicks and Suns will play a Zion Bowl game on Wednesday night as both teams tank to to finish with the league’s worst record.

The Knicks and Suns will play the ‘Zion Bowl’ tonight as both teams tank to finish with the NBA’s worst record pic.twitter.com/AS08E40EKG

“I’ve never seen anyone 6-8, 285, but what he is is he’s the most explosive, powerful, bouncy, quick, fast player that I’ve ever seen and I hope he doesn’t get hurt for the next five years because if he stays healthy for the next five years, we’re going to see some incredible dunks and blocks,” former Duke star Christian Laettner said Tuesday on ESPN’s “The Jump.” “I think people don’t give enough credit to his defensive play. He’s going to be able to block shots in the NBA, he’s going to be able to block dunks so it’s going to be fun to be able to watch him play.” Follow Adam Zagoria on Twitter And Like ZAGS on Facebook

Christian Laettner: 'Of course Zion will be out there as soon as he can'