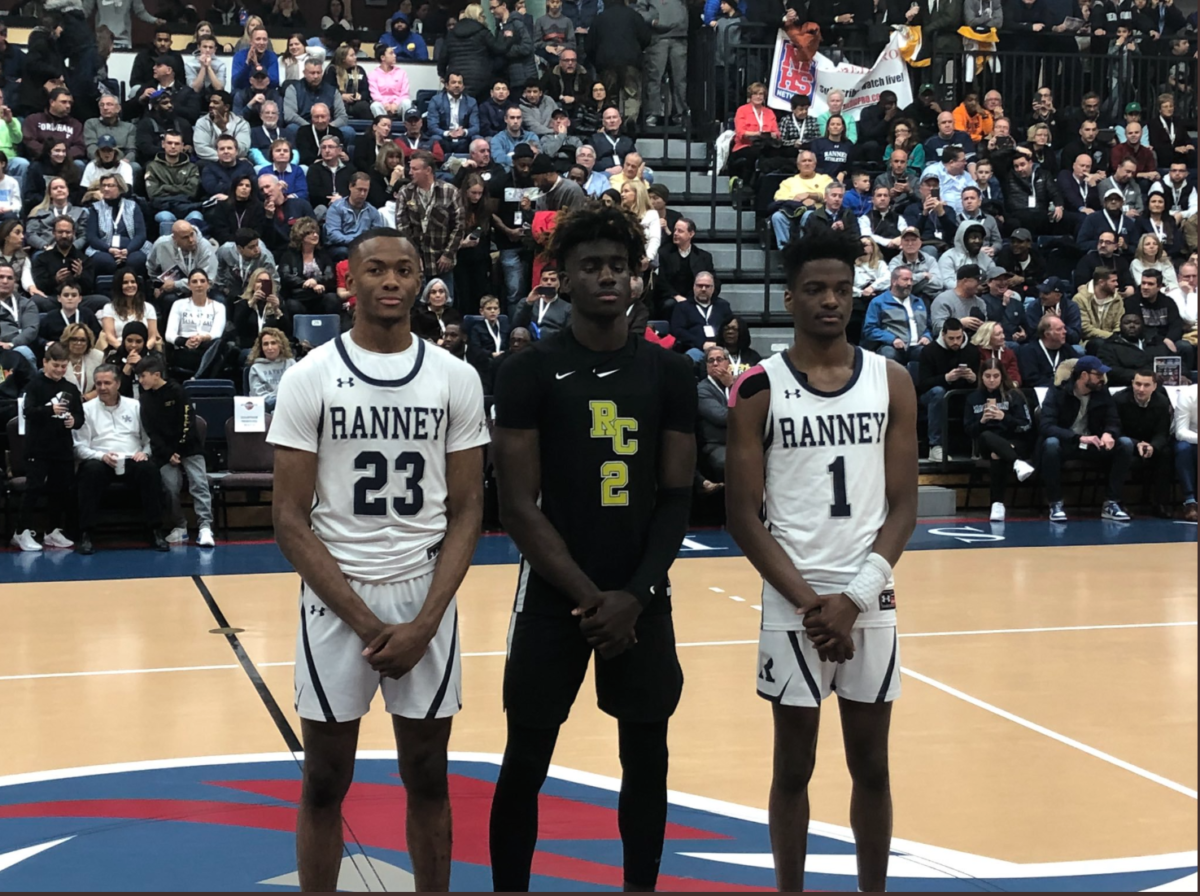 By ADAM ZAGORIA TOMS RIVER, N.J. — Some high school careers were destined to end here on Saturday night. With Roselle Catholic and Ranney both featuring high-major Division 1 commits, the loser was going to feature some decorated and disappointed seniors. As it turned out, Villanova-bound guard Bryan Antoine and Florida-bound wing Scottie Lewis led Ranney to a 56-50 victory before a capacity crowd in the New Jersey Non-Public B title game at the RWJ Barnabus Arena. And so while Ranney and its two McDonald’s All-Americans are headed to the New Jersey Tournament of Champions for the first time, Kentucky-bound wing Kahlil Whitney and UNLV-bound point guard Josh Pierre-Louis saw their careers come to an end. The Lions (28-4) beat the Panthers (29-3) in this game a year ago and went on to win the New Jersey Tournament of Champions title. Whitney and Pierre-Louis were seeking back-to-back titles after current LSU freshman Naz Reid led the team last season. Ranney will be the No. 1 seed in the TOC, which begins Wednesday. They get a bye into the semifinals on Friday.

After going for 25 points when Ranney beat Roselle Catholic, 61-49, on Jan. 30, Antoine went for 21 points on 8-of-16 shooting and 5 rebounds in the rematch despite battling a right shoulder ailment that kept him on the bench for part of the game. Lewis finished with 8 points, 6 rebounds and 6 assists. Senior guard Ahmadu Sarnor scored 15 points with 7 rebounds. “This is only 75 percent of what we want to do, win our third championship,” Lewis said, referring to county, state sectional and state titles. “Sunday we’re going to get a fourth one [in the TOC] and we’re determined to do so.” Ranney figures to be the No. 1 seed in the TOC and Antoine said the ultimate was to win the school’s first. “Yeah, it is,” Antoine said. The game was stopped for several minutes with Ranney leading 54-47 and 24 seconds left as Pierre-Louis lay on the floor with an apparent concussion. He appeared to suffer a seizure and was throwing up. Tournament organizers asked over the microphone for a doctor. He was eventually brought off the court on a stretcher and was apparently wearing a neck brace. “One of the medical guys said that he must’ve gotten hit in the head,” RC coach Dave Boff said. “They think it’s probably a pretty good concussion that he got. “It’s really, really scary stuff. It kind of puts everything into perspective. Ten seconds beforehand you’re really upset about probably losing the state championship and then to see one of  your kids on the floor, you realize it’s just high school basketball.”

Said Antoine: “Me and Josh are very close friends, I kind of hate to see that happen to him. I’ll be praying for him, but I’m just happy we came out with the win.” Ranney and Roselle Catholic have been New Jersey’s best teams this season. The Panthers are ranked No. 11 by USA Today, while the Lions are No. 18.

The 6-foot-7 Whitney finished with 26 points on 11-of-24 shooting, 4 rebounds and 2 assists in his final high school game before heading off to Kentucky. He will also play in the McDonald’s All-American and Jordan Brand Classic games, before signing his NLI in his hometown of Chicago in early May. “We had a bad shooting night and it showed on the scoreboard,” Whitney said. “I work on basketball like it’s my profession, I work on basketball every day. I come out here and try to give it all I got. I won the state championship last year. Coming into this game, I wanted to win it two years in a row and I wanted to go down fighting.” He said he would be back in the gym on Sunday. “Kahlil had a phenomenal game and God bless Josh for playing,” Lewis said. “I’m actually going to head to the hospital now to check up on him.” Whitney was looking to become the fourth Kentucky commit since 2014 to win the TOC, following Karl-Anthony Towns at St. Joe’s-Metuchen in 2014, Isaiah Briscoe at Roselle Catholic in 2015 and Nick Richards at The Patrick School in 2017.

Pierre-Louis played despite having two broken bones in his hand which he injured in the win over Gill St. Bernard’s on Wednesday. He was clearly limited and finished with just 4 points, including two thunderous one-handed dunks. Whitney did not have a second scorer to help him in the biggest game of the season as no other Lion reached double-figures. After Roselle Catholic closed to within 26-25, Ranney rattled off a 14-2 run — capped by an Antoine dunk — to go ahead 39-27. But the Lions then answered with a 6-0 run that included back-to-back steals and one-handed dunks by Pierre-Louis and another dunk by Whitney. Lewis then answered with a shot off the window that triggered some “Scott-ie Lew-is” chants from the Ranney students. His three-point play made it 42-33. Whitney’s 3-pointer cut it to 48-43 with less than 2 minutes left, but Phillip Wheeler scored to push the Ranney lead to 50-43. Antoine then drove for a layup for a 52-43 lead. Whitney made another 3-pointer to trim the deficit to 52-44 and a three-point play by Colby Rogers cut it to 52-47. At that point the game was stopped for about 10 minutes as Pierre-Louis was attended to and eventually left on a stretcher. When the game resumed, Sarnou hit two more foul shots in a quiet and somber gym.