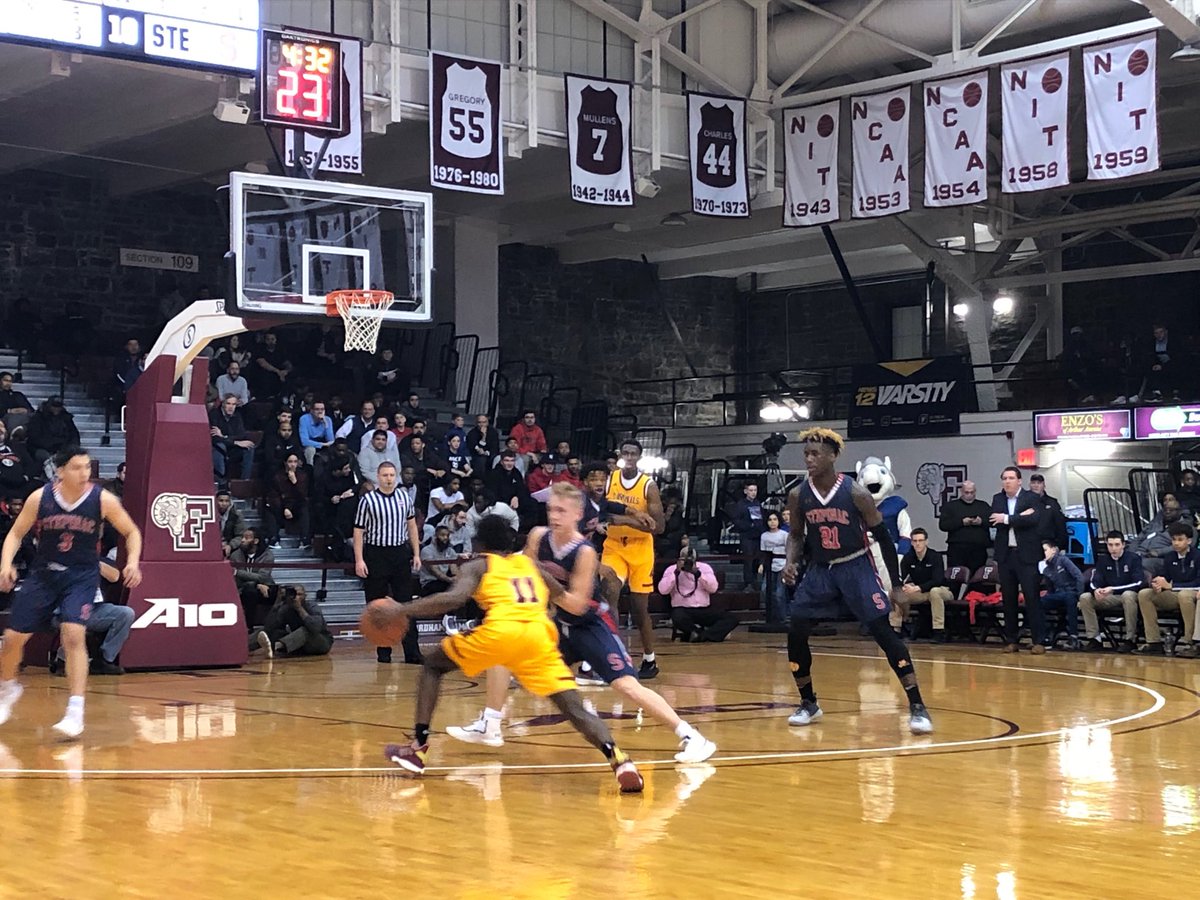 By ADAM ZAGORIA NEW YORK — A.J. Griffin and Archbishop Stepinac are one step closer to defending their New York Catholic League championship. The 6-foot-6 Griffin, a sophomore who is the son of former Seton Hall and NBA standout Adrian Griffin, was magnificent in going for 32 points and 11 rebounds as Stepinac downed Cardinal Hayes, 77-65, in the CHSAA AA semifinals Thursday night at Fordham’s Rose Hill Gym. Junior point guard R.J. Davis went for 25 points, 5 rebounds and 5 assists in the win. On Sunday at 3 p.m. at Rose Hill, Stepinac will meet Christ the King for the championship and the right to go to the New York State Federation tournament next week in Glens Fall, N.Y. The Royals advanced via a 72-61 win over Bishop Loughlin in which sophomore big man Moussa Cisse was brilliant with 22 points, 19 rebounds and 9 blocks and junior guard Ryan Myers had 17 points and 6 rebounds with 8 turnovers. A year ago, Stepinac beat Christ the King in the city final. “It feels great,” Griffin said. “Just coming out and getting it done and executing, it feels really good. We stayed positive the whole game and I’m glad we came out with the W.” Pittsburgh head coach Jeff Capel, Hofstra head coach Joe Mihalich and assistants from St. John’s, Seton Hall, Dayton, Fordham and Quinnipiac sat courtside for the doubleheader.

Between them, Christ the King (18-10) and Stepinac (14-15) have won six of the last nine CHSAA AA titles, with Christ the King owning five of them (2010-11 and 2013-15). “Moussa changes the way they play, Joe’s a really good friend of mine,” Stepinac coach Pat Massaroni said of Royals coach Joe Arbitello. “They’re going to be prepared, we’ll be prepared. We know they have more than Moussa. Ryan Myers, they have other guys who can play. “They were in the same boat as us, they were hurt all year and now they’re back and we’re back and it’s the two best teams in the city playing each other.” Stepinac won the school’s first Federation championship in 2018 via an 88-76 victory over PSAL champ South Shore. Along the way, they beat Long Island Lutheran in a controversial semifinal surrounding how many timeouts LuHi called in the game. LuHi is also back in the Federation tournament, meaning there could be a rematch. The Royals advanced to another city final despite losing big man Kofi Cockburn to national power Oak Hill Academy (VA) before the season, and junior guard Quaran McPherson to injury. Without them, the 6-11 Cisse was a force inside offensively and defensively and also flashed a jump shot in going 9-of-14 from the field. Seven of his nine field goals were dunks. “Let me tell you something, I don’t even think he’s quite there yet,” Arbitello said of Cisse. “Every game he gets a little bit better and a little bit better and a little bit better.” Christ the King won despite making 21 turnovers to Loughlin’s 9. The Royals also out-rebounded Loughlin, 43-30. “I just think it’s a culture of winning at Christ the King,” Arbitello said. “Malik Lacewell, Nick Molina, Lovell Smith, Nate Curry, these guys are all really good basketball players and they would make every school in New York City better if they were on their team.” Loughlin twins Julian and Justin Champagnie had tough games, combining to shoot 5-of-21 for a combined 19 points. They will announce their college choice soon and are considering Pittsburgh, Rutgers, Seton Hall, St. John’s and Tulane for 2019. In the second game, Griffin came out like a beast and had 16 points and 7 rebounds at the half when Stepinac seized a 38-24 lead on Hayes. Davis had 9 points and 5 rebounds at the break.

AJ Griffin with the pull-up pic.twitter.com/7lKQaQa0xr

Hayes closed to within 67-62, but Stepinac answered with an 8-0 run including 3-pointers by Luke Fizulich (10 points) and Griffin that put them ahead 75-62. “He’s a special player who’s got a driven work ethic,” Massaroni said of Griffin. “He did a great job of getting us buckets at key points. I thought he defended at a really high level. He makes them make difficult shots.”

Iowa-bound guard Joe Toussaint led Hayes with 24 points to go with 5 rebounds and 3 assists and became the school’s all-time leading scorer in the final game of his career. Jaylen Murray added 18 points and Julien Soumaoro  15 and 3 rebounds before fouling out. Hayes won the CHSAA AA title in 2017.