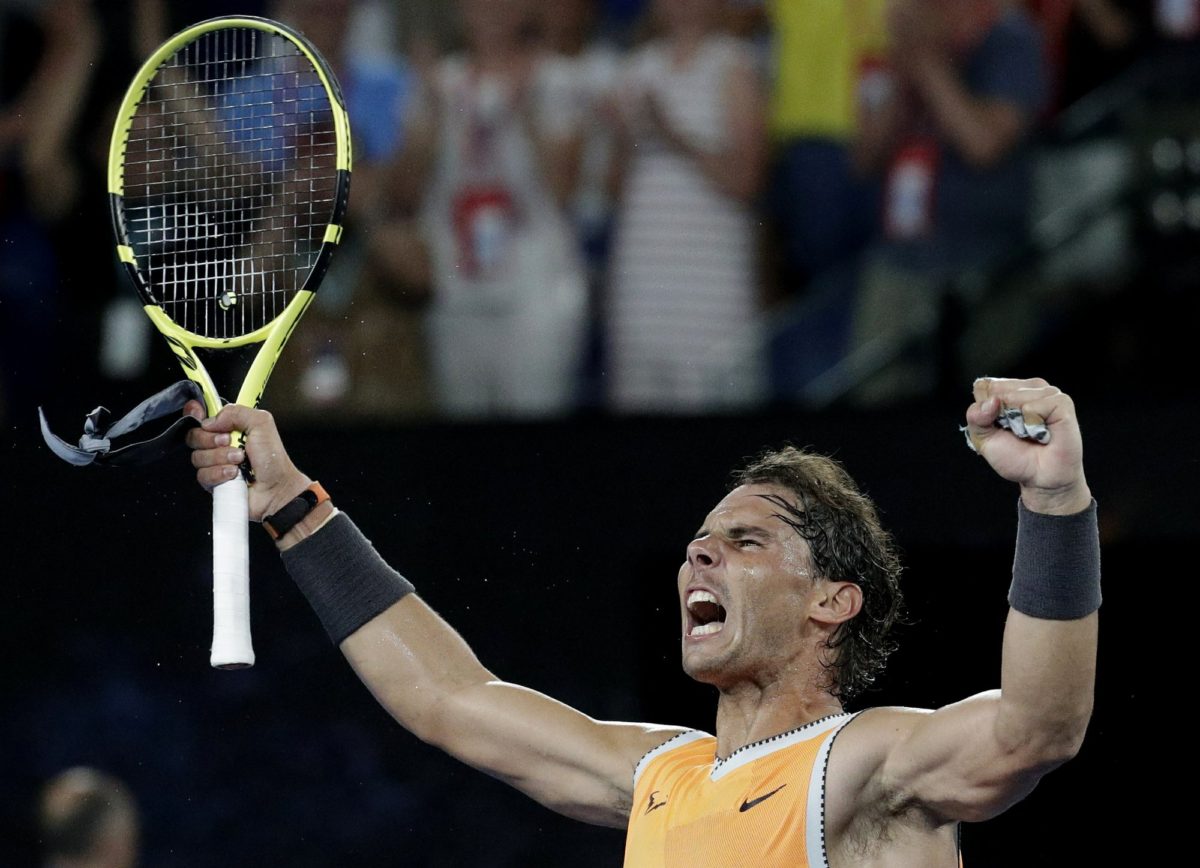 By HOWARD FENDRICH MELBOURNE, Australia (AP) — Rafael Nadal is certainly not treating tennis’ next generation well at the Australian Open. Add 20-year-old Stefanos Tsitsipas to the list of youngsters Nadal has bullied on his way to his fifth final at Melbourne Park and 25th at all Grand Slam tournaments. Nadal needed all of 11 minutes Thursday to show Tsitsipas — and everyone else — that the kid’s upset of Roger Federer was not going to be replicated on this night. Not even close. Breaking Tsitispas in the match’s third game and then another five times Thursday, while never facing a single break point himself until the very last game, Nadal won 6-2, 6-4, 6-0. “It felt like a different dimension of tennis completely,” said the 14th-seeded Tsitsipas, a blank expression on his face. “He gives you no rhythm. He plays just a different game style than the rest of the players. He has this, I don’t know, talent that no other player has. I’ve never seen a player have this. He makes you play bad.”

Rafa rolls into the final over Tsitsipas 2, 4 and 0 pic.twitter.com/TdzKHvE0vt

It was the same straight-set, no-contest treatment Nadal gave to 19-year-old Alex de Minaur in the third round and 21-year-old Frances Tiafoe in the quarterfinals. Asked if he was trying to make a statement with the way he soundly defeated these up-and-coming talents, Nadal said: “They don’t need any message, no. They are good. They’re improving every month. So it’s always a big challenge to play against them.” Sure hasn’t seemed like it. Tsitsipas’ run to the first major semifinal of his nascent career was most notable for the way he beat 20-time major champion Federer in the fourth round, saving 12 of 12 break points across four sets and 3 hours, 45 minutes. But the left-handed Nadal was a much more difficult puzzle to solve. On Sunday, the 32-year-old Spaniard will try to earn his second Australian Open title — he won the hard-court event in 2009 — and his 18th Slam trophy. That final will come against either top-seeded Novak Djokovic or Lucas Pouille, who meet Friday.

.@RafaelNadal hasn’t dropped a set en route to the final.

You’ve got to be happy with that ?#AusOpen pic.twitter.com/YHoGyrDv5p — #AusOpen (@AustralianOpen) January 24, 2019

A title would make Nadal only the third man in the sport’s history to win each Grand Slam title at least twice, joining retired Australian greats Rod Laver — a front-row spectator Thursday night in an arena named for him — and Roy Emerson. After a series of health issues, Nadal is once again the relentless forehand-whipping force that can dominate anyone. He quit during his quarterfinal match at Melbourne Park a year ago because of a right leg problem, then stopped again during his semifinal at the U.S. Open in September because of a painful right knee. That was followed by offseason surgery on his right ankle.

Most Major titles in men’s tennis history. Rafa can get to 18 on Sunday with a win. Novak can get to 15 with two more wins:

Even though he is wearing a strip of tape over an abdominal muscle that troubled him in the past, Nadal has been terrific in Australia, winning all 18 sets he has played. “I’m really disappointed today,” Tsitsipas said, adding that he hoped to “prove myself a little bit more, not let him dominate the entire match. Just felt wrong.”

Big applause and congrats to @RafaelNadal and his whole team for bringing tennis to another dimension. His game is more than inspiring to me. I really hope to get closer next time.

Big thanks to everyone for your support these two weeks here in Melbourne. I love this city! — Stefanos Tsitsipas (@StefTsitsipas) January 24, 2019