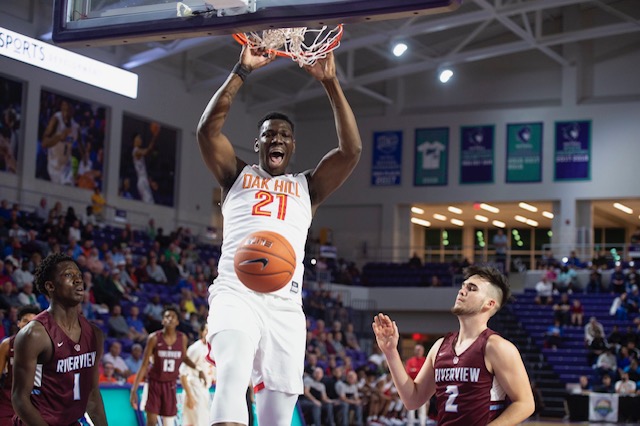 By ADAM ZAGORIA Kofi Cockburn is off the board to Illinois. The 6-foot-11, 290-pound big man from Oak Hill Academy (VA) committed on Sunday following his recent official visit. He also considered UConn, St. John’s, PIttsburgh and Kansas. “They’re looking for me to come in and start and be one of their main guys,” he said of his recent visit. “There’s playing time for me and they showed how they can get me better.”

Cockburn transferred to Oak Hill to play for legendary coach Steve Smith after spending time at Christ the King High School in Queens, N.Y. “Coach [Brad] Underwood is the perfect coach for Kofi,” Smith said. “He is demanding and Kofi likes to be challenged. He has an opportunity to come in and play immediately. He is physically ready to play as a freshman. He has a great skill set, can defend and rebound and score.” Cockburn played with the NY Rens on the Nike EYBL circuit, and Rens director Andy Borman raved about his skillset. “Kofi is an extremely skilled modern big,” Borman said. “He holds every offensive tool. He can finish around the rim consistently. He shoots it at a high clip in the mid-range and beyond. He is excellent at the free throw line. He rebounds on both sides of the floor. The thing I love most about him is that he is a terrific passer. He allows you to run your offense through him because he has incredible vision and is naturally unselfish. “He’s a great young man with a huge personality. He’s a true teammate and just a great young man.” Cockburn spent time on his visit with freshman Alan Griffin, who played at Archbishop Stepinac High School and on the NY Rens.

Cockburn’s mentor, Karriem Memminger, accompanied him on the visit and said he was impressed with Illinois’ commitment. He was recruited by Underwood and assistant Orlando Antigua. “We watched the game and there’s a desperate need for him,” Memminger said of the 73-71 loss to Florida Atlantic. “They need a big guy that can score in the post and can come in and contribute and help them right away. We saw by watching the game they played, there’s a need for him right away. “And especially that confidence playing in that Big Ten, playing against Michigan, Michigan State, Purdue, Wisconsin. That’s a big-boy kind of conference. We saw that Brad Underwood can coach, he knows what he’s doing. “And they recruited the crap out of him. They’ve been at every single one of his games. They’ve been down at Oak Hil, they’ve been at all his AAU games. They really, really recruited him. They really showed that they wanted him. And it’s like I told Kofi, always look at who really wants you, not who you want.” He added: “He likes them a lot, he likes them a lot.” Follow Adam Zagoria on Twitter And like ZAGS on Facebook

Keion Brooks 'getting close to making a decision'