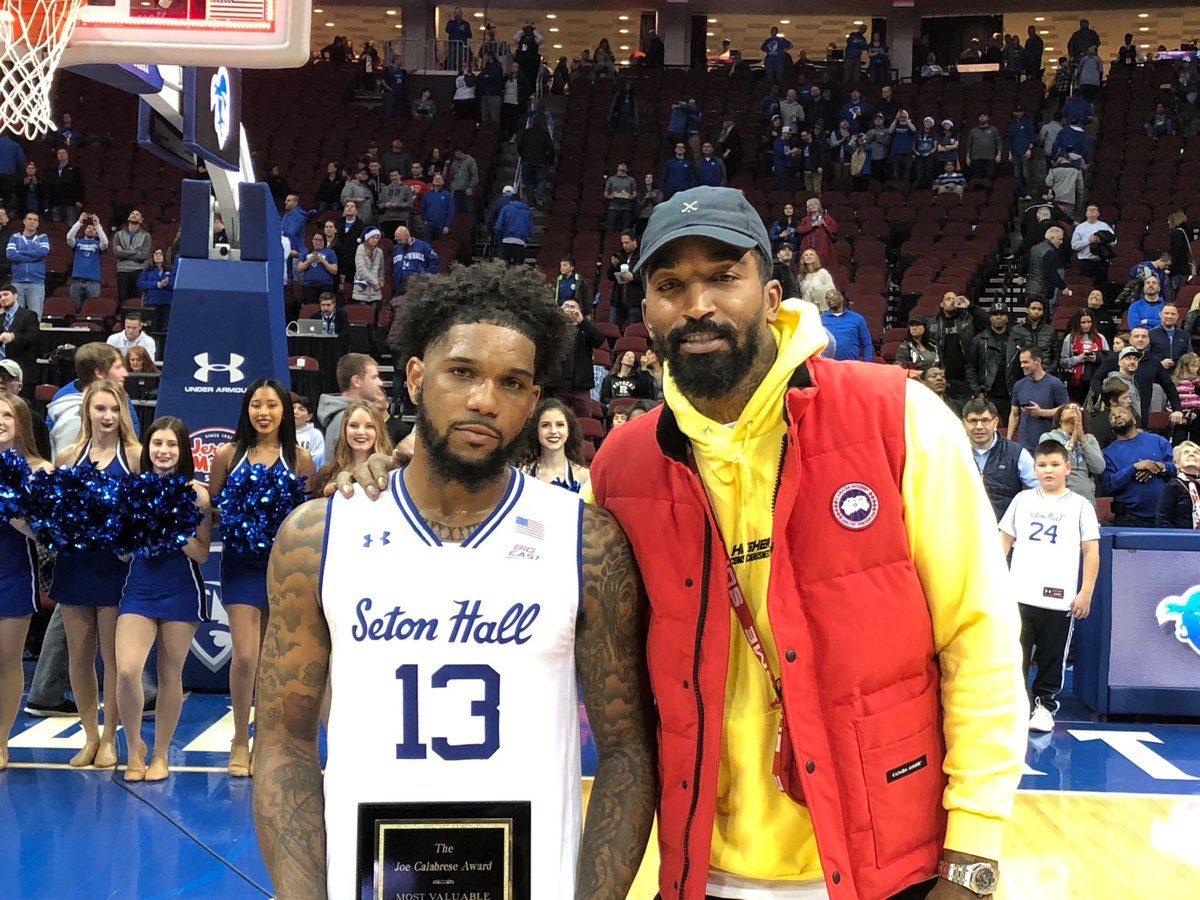 By ADAM ZAGORIA NEWARK — After its thrilling victory over Kentucky last Saturday at Madison Square Garden, the one thing Seton Hall couldn’t do this week was lose at home to in-state rival Rutgers. Mission accomplished. The Pirates took care of business, beating the Scarlet Knights, 72-66 at Prudential Center, behind a game-high 28 points from junior guard Myles Powell, who was 6-of-13 from deep and won the Joe Calabrese MVP Award. Sandro Mamukelashvili added 15 points and 9 rebounds for Seton Hall (7-3), which now leads the series 40-30 and has taken 5-of-6. Rutgers won last year’s contest at the RAC, 71-65. Powell said losing this game last year “left a bad taste in my mouth” and he coudn’t wait for the rematch. “It feels good, [the Garden State Hardwood Classic trophy] is where it’s supposed to be now,” Powell said. The win came in front of a packed house that included former Cavaliers, Knicks and St. Benedict’s Prep guard J.R. Smith. “He got a little tired at the end but overall he played a really good game, especially playing against a box-and-one in college,” Smith told me. Smith thinks Powell has NBA potential down the road. “Yeah, absolutely,” he said. “He definitely shoots the ball really well . He can handle the ball. He’s a bigger, stronger guard so that’s a plus for him. He played well.”

Is it too early to talk about Seton Hall as an NCAA Tournament team? Yes, probably. But they already own arguably the most impressive non-conference win of any Big East outfit, although they also have losses to Louisville, Saint Louis and Nebraska. The Pirates are currently ranked No. 85 in the NET rankings. Maryland (9-2), ranked No. 41, presents another golden opportunity to bolster their NCAA Tournament resume. If Powell and Co. can somehow beat the Terrapins next Saturday on their home floor, they would own a pair of very impressive non-conference wins going into Big East play beginning Dec. 29 at home against St. John’s. “Coach just told us that we’re right back where we’re supposed to be, we’re not going to just overlook Sacred Heart on Wednesday,” Powell said. “We’re going to get back practice and then we got a big one coming up on Saturday. We’re going to be ready for both.” Traditionally, teams that finish at least .500 in the Big East can look forward to an NCAA Tournament invitation, so the Pirates would need to go at least 9-9 in league play. “Yes, that’s always the goal,” Powell said of making the Big Dance. Seton Hall was picked eighth in the Big East, but at this point the conference doesn’t appear to have a dominant team.

After Saturday’s 74-71 loss at No. 1 Kansas, Villanova has lost back-to-back games twice this season and GQ Jay’s club will enter Big East play with at least four losses. The Wildcats figure to regroup and be near the top of the league, but losing four players to the NBA has clearly altered Jay Wright’s club. Marquette, Butler, Creighton, Providence and unbeaten St. John’s all have potential to be NCAA Tournament teams, but again there is no dominant team, meaning if Seton Hall can steal a few road games and handle business more or less at home, there’s no reason the Pirates can’t go dancing for a fourth straight year. Considering Willard’s club lost four key seniors, including two-time Calabrese MVP Award winner Angel Delgado, that would be an impressive accomplishment. It’s still only mid-December, but that Maryland game now looms as a huge opportunity. Photo: Rutgers Basketball Follow Adam Zagoria on Twitter And Like ZAGS on Facebook

Kansas back at No. 1 in AP Top 25 men’s hoops; Gonzaga falls from top spot to No. 4 after Tennessee loss