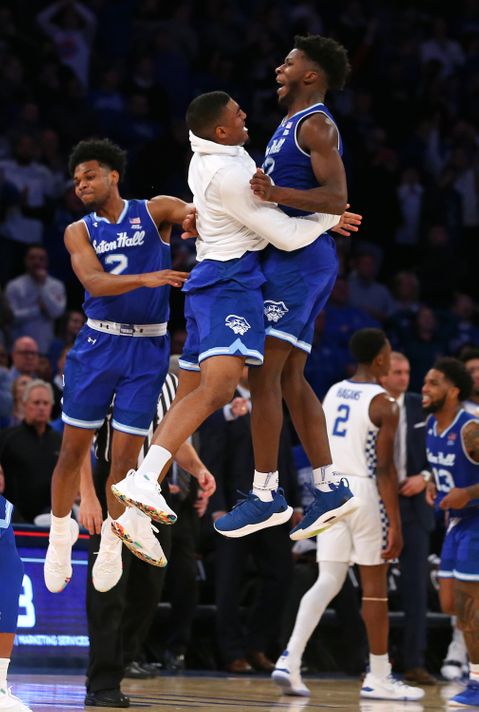 By ADAM ZAGORIA NEW YORK — A pair of Myles’s stunned No. 9 Kentucky. Junior Myles Powell and sophomore Myles Cale combined for 45 points, including two deadly 3-pointers, as Seton Hall stunned Kentucky, 84-83, in overtime in a thriller in the Citi Hoops Classic at Madison Square Garden. Among those on hand for the noon tip-off were Knicks rookie and former Kentucky star Kevin Knox, Yankees GM Brian Cashman and former Seton Hall stars Terry Dehere and Jerry Walker. “It’s a big win, I’m really proud of how they played,” said Pirates coach Kevin Willard, who won his first matchup with Kentucky coach John Calipari. The win gave Seton Hall its first top-10 non-conference victory since a 1992 victory No. 6 Ohio State. “You fight to win a game, and Seton Hall fought to win this game,” Calipari said. “They fought. When I thought we got them, they didn’t think that. They just fought.” Cale’s 3-pointer in overtime from the right wing came off a terrific shot fake by Taurean Thompson and was the difference as Seton Hall outscored Kentucky, 14-13, in the extra period. He finished with 17 points. “My coaches tell me always to be ready because you neve know when the ball’s going to come your way,” Cale said. “It got to me, I took my time pump faked and the ball went in.” “I have confidence in Myles Cale,” Willard said. “It was a great shot fake and he knocked it down…It was a big-time shot.”

The dagger from Myles Cale to knock off No. 9 Kentucky in OT!pic.twitter.com/fxgenGR3us

Powell scored 25 of his team-high 28 points in the second half and overtime, including a step-back, double-clutch 3-pointer at the end of regulation that appeared to win the game. After managing just 3 points on 1-of-4 shooting in the first half, Powell exploded in the second. His three-pointer tied the game at 67 with 1:17 remaining. On an inbounds play for Seton Hall, Cale passed to Quincy McKnight who found Powell in the corner. Powell dribbled in and then stepped back and drained one over Immanuel Quickley as the Seton Hall fans went wild. “Oh, he was great,” Calipari said of Powell. “The one on the other side where he double-clutched it? Come on.”

With 1.5 seconds on the clock, Kentucky freshman Keldon Johnson dribbled up court and drained a game-tying three-pointer from halfcourt, tying the game at 70.

In the overtime, Powell hit another 3-pointer to put the Pirates up 81-77, but Cale’s three was the difference in an epic win for the Pirates. McKnight blocked Johnson’s last shot for Kentucky. “A lot of effort, but we were ready,” Powell said. “We stayed together as a team and we got the job done.”

P.J. Washington led Kentucky with a season-high 29 points and 13 rbounds. Reid Travis added 13 points. “That kid is the real deal,” Willard said of Washington. “He plays hard, he’s the real deal.” Seton Hall improved to 9-3 at Madison Square Garden since 2016, incluing a Big East Tournament final win over Villanova and now a win over the Wildcats. “‘It’s a magical place,” Willard said. “It’s one if those places that I think the kids understand the history.’ FREE THROWS **Kentucky commit Kahlil Whitney and his father, former Seton Hall standout Kelly Whitney, were courtside. Whitney plans to sign his NLI with Kentucky in April. Read more about his story here.