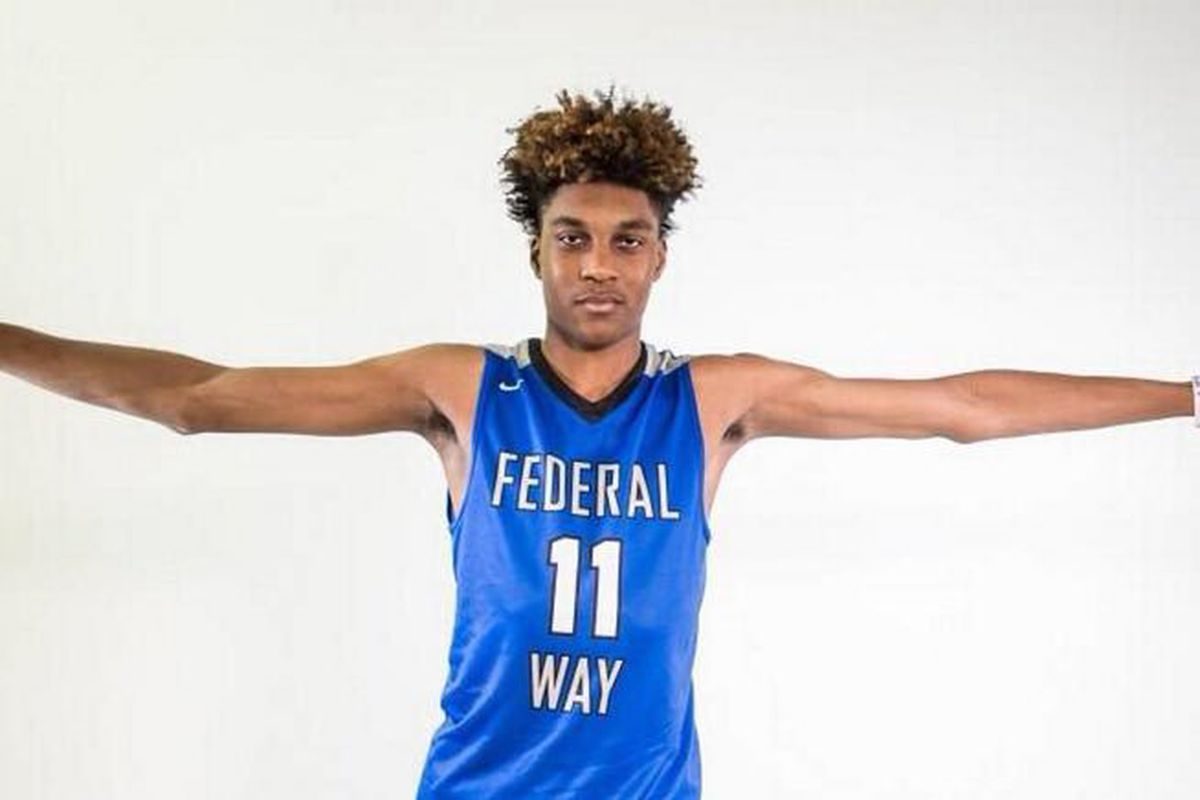 By ADAM ZAGORIA NEW YORK — Kentucky head coach John Calipari and coaches from Texas are expected to watch Jaden McDaniels and his Federal Way (WA) teammates on Sunday at the Battle in the Apple Showcase at Barclays Center. The 6-foot-11 McDaniels calls to mind a young Kevin Durant and has cut his list to Kentucky, Texas, UCLA, San Diego State and Washington. “I’m just going to play, I’m not worried about who’s there,” McDaniels told me Saturday morning after practice at the NBA Players Association headquarters in Manhattan. “I’m just going to play my game.” Asked about a possible timeline on a college decision, McDaniels said, “No, I’m just playing, trying to have fun.” McDaniels averaged 18.6 points and 9.1 rebounds and drained 25 3-pointers on the Nike EYBL circuit this past summer.

at the NBA Players Association ahead of his game at Barclays tomorrow. Kentucky, San Diego State, Washington among those involved. pic.twitter.com/gdaVd7ObNV — Adam Zagoria (@AdamZagoria) December 8, 2018

Toronto Raptors forward and Long Island native Danny Green is sponsoring the event and attended Federal Way’s practice on Saturday after playing in Brooklyn Friday night. “I’ve seen some of his highlights, he’s very talented,” Green said of McDaniels. “He’s very smooth, athletic with the ball. He’s lanky. I hear he’s the next KD. Obviously, when KD was that age he didn’t have all his coordination down either, but if you can handle the ball and shoot at that size and be as smooth in the game, he definitely has a lot of room to grow. “He’s way ahead of the game to be able to do that.” Yattah Reed, the Federal Way coach, said McDaniels shares some things in common with Durant, but will eventually be his own type of player. “Man, when people see him, obviously he has a high skillset and they make those comparisons, KD and things like that,” Reed said. “He’s a unique player, but a lot of people don’t know, he has grown tremendously being a leader for this team and that’s why we’re having the success that we’re having. “He just wants to play basketball and he’s not into all the hoopla.” Reed said as far as recruiting, “We’ll sit down when we get back to Seattle and see where he’s at.” With James Wiseman (Memphis) and Vern Carey (Duke) already off the board, Kentucky is in need of bigs in the Class of 2019. Calipari has already visited McDaniels twice in Washington and will now see him a third time following Kentucky’s game against Seton Hall at Madison Square Garden. “Talking to Cal and Kenny Payne, they’ve made Jaden a priority. He’s a kid they need to get for this 2019 class,” Cartiea French-Toney, a trainer who works out McDaniels three times a week at 6 a.m, told Kyle Tucker of The Athletic. “He has trained Jaden since the ninth grade and worked with Jalen before that. “He liked the visit a lot. He said Kentucky is a real basketball blue blood, like they really love their basketball there. He was surprised by how many people showed up to the arena for an early game against a team that wasn’t really that good. He loved the fans. People kept coming up to him and telling him he should come to Kentucky. That definitely made an impression. The other visits were more relaxed, and he wasn’t as intertwined with the fans like that.” Kentucky is also expected to watch Class of 2021 Brewster (N.H.) Academy wing Terrence Clarke, who holds offers from UConn, Georgetown and Indiana, among others.   Battle in the Apple Showcase at Barclays Center