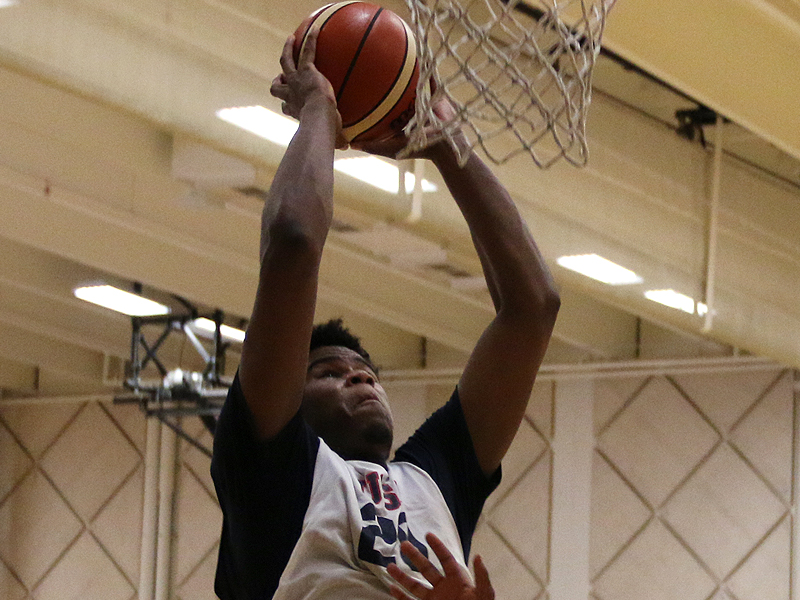 By ADAM ZAGORIA Vernon Carey, the 6-foot-10 big man from the University School (FL) and Nike Team Florida, says he’s down to two schools and will announce his college choice on Thursday. The announcement will now take place at noon ET on SportsCenter.

Vernon Carey Jr. the no.3 overall prospect in the ESPN 100 will make his college announcement Thursday on ESPN during the noon eastern SportsCenter. His final schools are Duke, Michigan State and North Carolina @espn @SportsCenter — Paul Biancardi (@PaulBiancardi) December 5, 2018

Ranked No. 3 in the 2019 ESPN 100, Carey is officially down to Duke, Michigan State and North Carolina, but a source close to the recruitment said Wednesday it will be either Duke or Michigan State. “I don’t know where I’m going yet, but I’m leaning between two schools,” he told the Detroit Free Press before announcing Thursday as the date. “It’s really between two schools.”

Vern Carey is still deliberating today between Duke and Michigan State, source says. Was told to turn his phone off for rest of day/tomorrow. pic.twitter.com/AekJyeF4NW

Carey said former Michigan State star Jaren Jackson Jr. has been recruiting him, and that he likes Tom Izzo’s coaching style. “I feel like I can trust Tom Izzo,” Carey Jr. said. “That’s most important to me. I feel like I can trust him.” Vernon Carey Sr. played football at Miami, but his son cut them along with Kentucky last week.  Still, Carey Sr. supports Izzo as well.

“I remember the first time we were on campus,” the father told the Free Press. “I said, ‘Hey, if (Izzo) is going to coach my son, I’m OK with it.’ I respect him a lot.

“Coach Izzo is a hard worker, tough on his kids. He pushes them to be the best they can be. Great coach, great tradition, great community. They’re big on us — and we’re big on them.”

Michigan State also remains alive for La LUmiere (IN) big man Isaiah Stewart, who is also considering Duke, Washington and Syracuse, among others. The NCAA late signing period runs April 17-May 15. Follow Adam Zagoria on Twitter And like ZAGS on Facebook