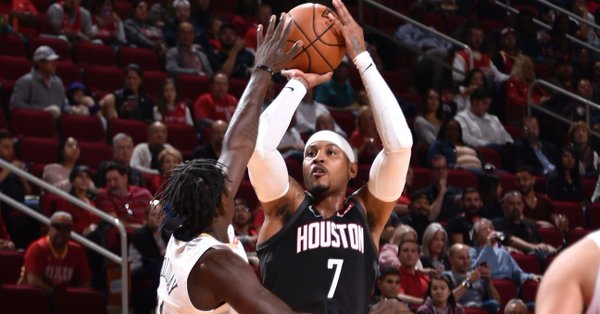 Rockets players believe Carmelo Anthony has played his final game in Houston, according to a report from ESPN.

Anthony, who was out for the second straight game on Sunday night with an illness, is in his first season with the Rockets after one year in Oklahoma City.

“That’s inaccurate,” he said before Sunday’s game. “I would expect Carmelo to be playing when he’s healthy.”

Daryl Morey says Melo is really sick. “I would expect him to be playing when he’s healthy.” pic.twitter.com/kDjy6jgZkz

Still, Marc Stein of the Times reports Anthony’s time with the Rockets appears to be coming to a close.

The Rockets have denied they are waiving Carmelo Anthony, but two sources close to the situation say Anthony has been informed that his brief time with the team will soon be ending. Anthony has been listed as “out” for Houston’s game tonight against Indiana due to illness

The Rockets, who reached the Western Conference finals last season, are off to a disappointing 5-7 start, with many outsiders blaming Anthony for the struggles.

Morey went on to say that he wanted to speak to reporters in large part to defend Anthony.

Morey says: “it’s unfair that there’s all this speculation on just one person. I understand it, he’s obviously a Hall of Famer. But it’s unfair.”

Meantime, Twitter has gone ablaze on the subject, with Anthony’s good friend Dwyane Wade among those chiming in.

Trying to make my guy @carmeloanthony the fall guy huh!? Man y’all need to stop. That’s the easy way out instead of addressing what the real problem.

I am hearing the @Sixers are kicking the tires on the idea of claiming @carmeloanthony off waivers if the @HoustonRockets let him go. Definite need for Philly, with @dariosaric gone and @mikemuscala the only other option at the 4 right now.