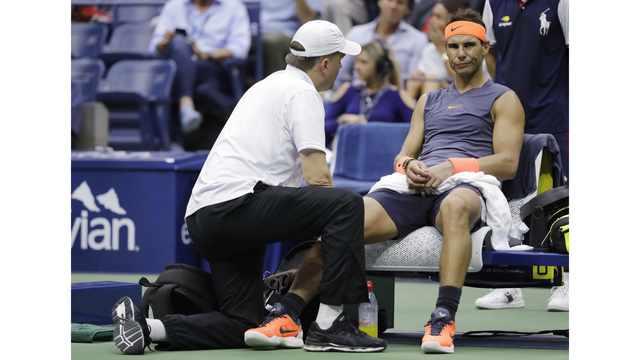 LONDON (AP) — Rafael Nadal pulled out of the season-ending ATP Finals because of an abdominal injury and had surgery on his right ankle Monday. Nadal announced on Twitter that he is done for the year, citing the stomach muscle issue that forced him to withdraw from last week’s Paris Masters. He added that he decided to have the ankle operation so he can start 2019 healthy. John Isner will replace Nadal in the ATP Finals field. Play in London begins next Sunday. Nadal hasn’t competed since he retired from his U.S. Open semifinal because of a painful right knee. He lost his No. 1 ranking to Novak Djokovic on Monday. Because Nadal’s season is over, Djokovic is assured of finishing the year atop the ATP rankings for the fifth time. The 32-year-old Spaniard ends 2018 with a 45-4 record and five titles, including his 17th Grand Slam trophy at the French Open in June.

New @ATPWorldTour rankings with Novak Djokovic now No. 1 in the world followed by Nadal and Federer. pic.twitter.com/tHxfYhY23p