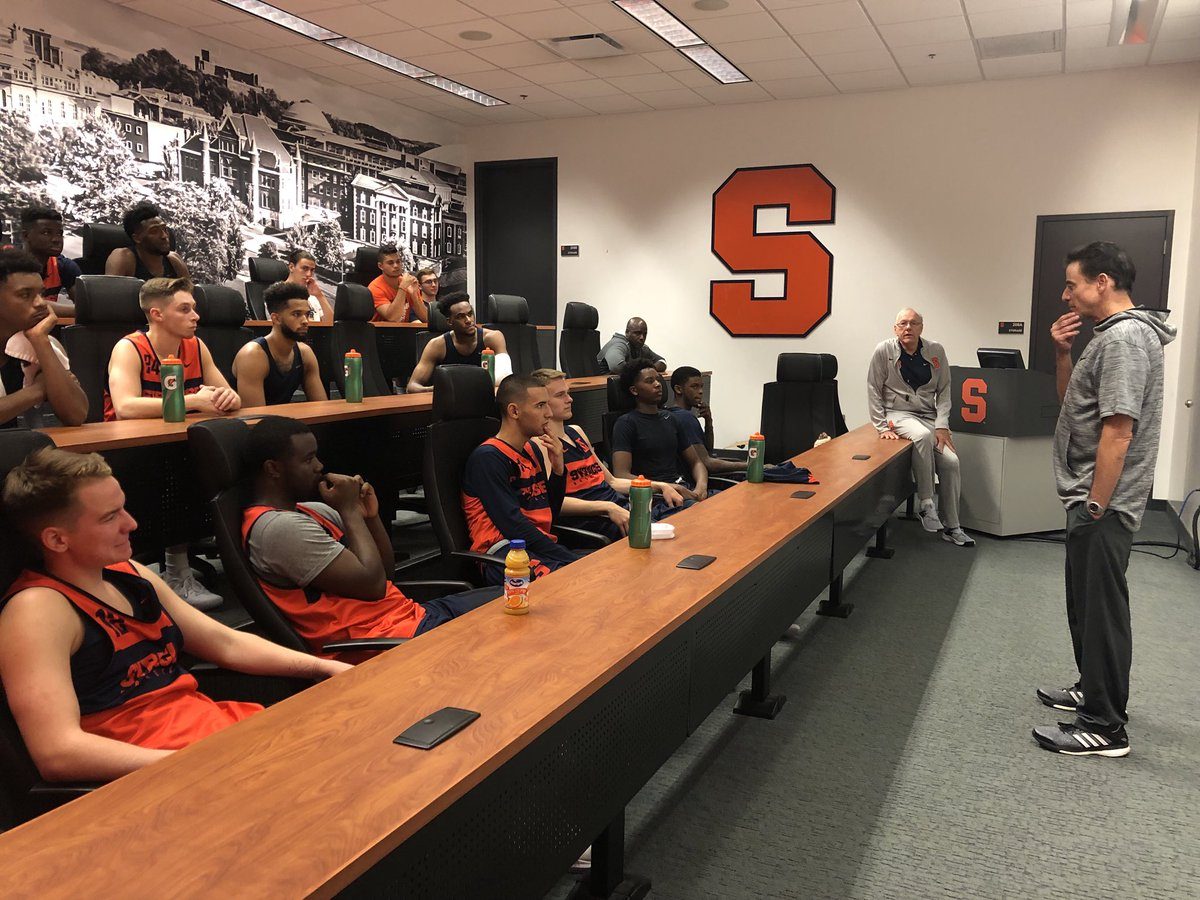 By ADAM ZAGORIA Rick Pitino doesn’t have a team of his own to coach this season, so he’s touring other schools and imparting some wisdom. Pitino, who was fired at Louisville last October in the wake of the Brian Bowen/Adidas scandal, has visited Cincinnati, Syracuse and Manhattan in recent days. He may also hit Seton Hall in the coming days or weeks. “He spoke to our team,” Syracuse coach Jim Boeheim said Thursday by phone. “He was really here to go over some things with the coaching staff and gave us some ideas. I think it’s always good to get a fresh take on things.” Boeheim famously called Pitino on Pitino’s wedding night in 1976 to offer him a job as an assistant coach at Syracuse and the two have maintained a close, and colorful, relationship ever since. In 2012, the two coaches each said the other was “full of s**t” as they sparred over the breakup of the Big East. Both Syracuse and Louisville eventually landed in the ACC. “He’s been a friend of mine for 43 years when he first worked for me and I think it was great to have him back up here,” Boeheim said. “He was up here 43 years ago when we started this thing, and it was really great to have him back here.” Now that Pitino has free time on his hands, Boeheim, like Cincinnati coach Mick Cronin, Manhattan’s Steve Masiello and Seton Hall’s Kevin Willard want Pitino around. “I know from being with the Olympic team and around Mike D’Antoni and Coach K and Monty Williams and Tom Thibodeau, I’ve learned some really valuable things in those situations,” Boeheim said.  “And this was really valuable. We were interested in some things that Louisville did, and I think Rick is one of the best technical coaches that we have.”

Spoke to & saw the @GoBearcatsMBB. Young & hard working group.Talented at 1/2/3 positions. Raw at 4/5 spots, but if they develop, another super season . Jarron Cumberland multi talented scorer/passer.You know they will bring it on defense . Mick’s new renovated arena is special! pic.twitter.com/6V3blUg5AM

Boeheim said Pitino suggested “a couple drills that would be really helpful and a couple things defesnively that would help us, so it was very, very valuable.” After spending two days at Syracuse, Pitino came to New York and saw his old protege Masiello, who was a ball boy with the Knicks when Pitino coached there. “Any time you can be around a basketball mind such as himself, it’s obviously going to help your program in basketball related areas,” Masiello said of his former Louisville boss. “He has a plethora of knowledge in regards to his experience of what goes into winning and what goes into team-building. And anytime you can have those type of things shared with your staff and players, it’s an opportunity to improve and get better. “It was just great to be around him.” Pitino, 66, is the only man to lead two schools to NCAA titles, winning them at both Kentucky and Louisville. The Louisville title in 2013 was erased from the history books when the NCAA vacated the title in the wake of Stripper Gate, one of three massive scandals that brought Pitino down at Louisville. He has steadfastly maintained his innocence and said he had no direct knowledge of both the Stripper Scandal, and the Bowen/Adidas payments. Pitino has his own book out now, “Pitino: My Story,” while Michael Sokolove released a book entitled “The Last Temptation of Rick Pitino,” which provides an in-depth look at Pitino’s career, the various scandals and the overall state of college basketball. Meantime, beginning Monday in New York, the trial begins involving former Adidas executive James Gatto, Adidas consultant Merl Code and sports agent Christian Dawkins, who is said to have helped funnel the payments to Bowen’s father. Pitino has been linked to various college and NBA jobs since leaving Louisville, but Pitino has said multiple times recently he’s done coaching. Boeheim and Masiello said they didn’t dive deep with Pitino about his future plans. “I don’t know exactly wht’s he’s going to do,” Boeheim said. “Obviously, he’s got a lot of things under way. I still think he has a lot of energy for the game of basketball. What will happen with that, I’m really not sure.” Follow Adam Zagoria on Twitter And Like ZAGS on Facebook

Kristaps Porzingis has no timetable on return; doesn't rule out sitting entire 2018-19 season