Kristaps Porzingis has no timetable on return; doesn’t rule out sitting entire 2018-19 season 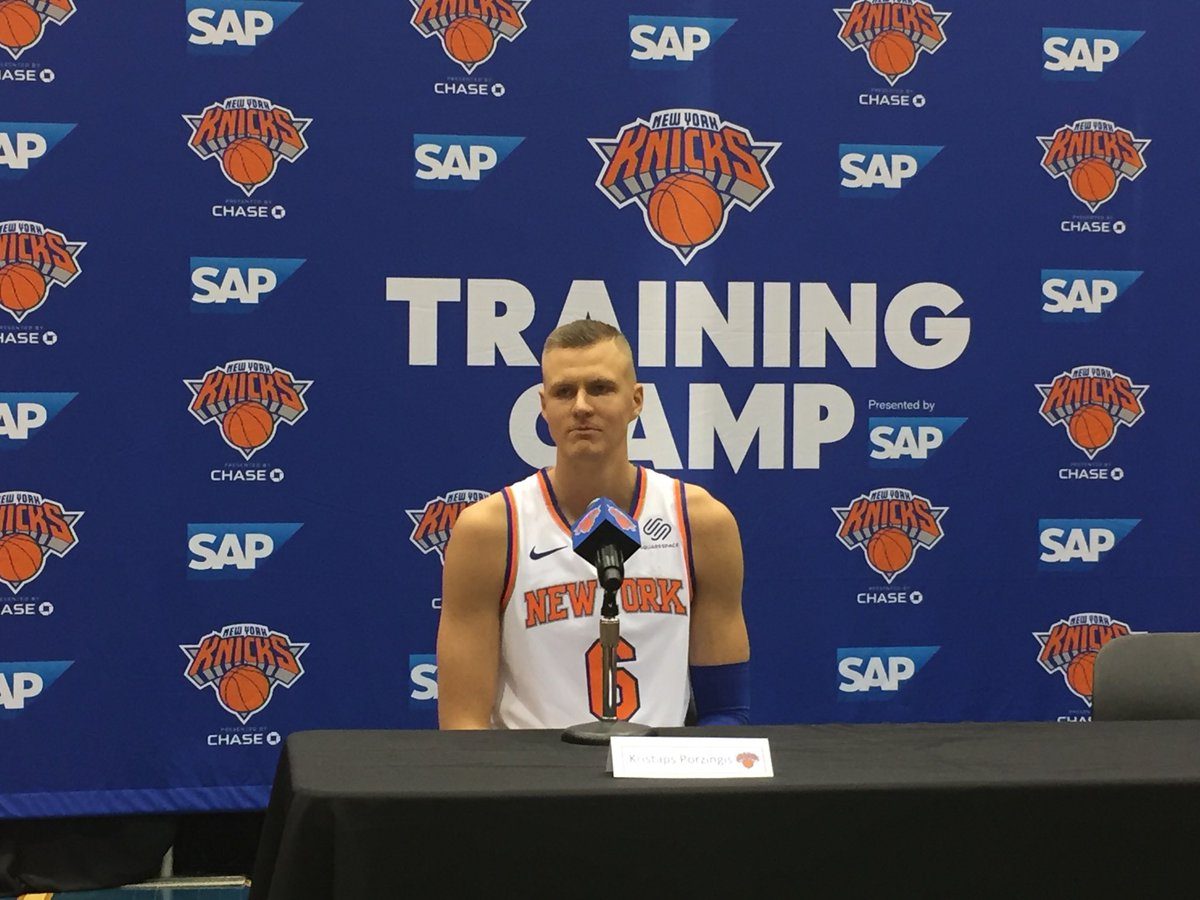 By ADAM ZAGORIA GREENBURGH, N.Y. — Kristaps Porzingis doesn’t have a timetable on his return from ACL recovery, and didn’t rule out sitting out the entire 2018-19 season if necessary. “I’m hungry and I want to be back on the court as soon as possible,” the 7-foot-3 unicorn said Monday at Knicks’ Media Day in his first public comments since the spring. “It’s been a long process. I’m getting itchy and I want to be back on the court as soon as possible. But it won’t happen until I’m 110 percent and medically cleared.” He added: “Timetable, there’s no timetable yet. We’re moving forward and progressing every day. Whenever I’m ready, I’m going to be back.” When I asked Porzingis if it was possible he could miss the entire season if he didn’t feel ready to return, he didn’t rule it out. “It’s really hard to say, there’s no timetable,” he said. “I’m going to be back when I’m healthy and medically cleared, and whenever that is, that’s what’s going to happen.” Porzingis averaged 22.7 points and 6.6 rebounds in 48 games last season before tearing his left ACL on Feb. 6. He said he’s “running,” but I’m not sprinting yet.” “I feel good, the leg is getting stronger,” he added. “I feel really, really good. I’m doing some stuff on the court already, shooting, light running, so I’m making progress every day.

‘Timetable, there’s no timetable yet. Whenever I’m ready, I’m going to be back’

The Knicks can sign Porzingis to a max five-year, $158 million extension now, but can also save $10 million toward free agency if they wait until next summer and pay him as a restricted free agent. “That is something I have not thought about,” he said. “I think my management is dealing with [that] and we’re going to talk about that whenever is the right time. Right now I’m really focused on the knee and coming back strong.” Porzingis said it was especially meaningful to have new Knicks coach David Fizdale come to visit him in his native Latvia this summer. “Yeah, that was important,” he said. “He came all the way to Latvia to come visit with me and spend time with me with his wife. It was good. He came to see how I looked, what the facilities looked like where I was working during the summers and we spent some good times together talking about basketball, talking about life. His personality, my personality, so we got to know each other a little bit and we spent some really, really productive days together.” Porzingis appears to be buying into Fizdale’s optimistic and hard-driving personality. “I believe that he’s that type of person that wants to get the maximum out of each player around him, so I think me and him can work together really well,” he said. “I think we’re on the same page there.” Porzingis opted to do some of his rehab in Spain with Real Madrid instead of in New York, something he said made him feel more comfortable. “I just wanted to be closer to home, that’s why I picked somewhere in Europe and that was the best place for me to keep doing my rehab. And those are the best faciliteis available so that’s why I made that decision.” Porzingis said he’s in uncharted territory because of his size, and the doctors aren’t quite sure how a 7-foot-3 man will respond. “There is no protocol for a 7-3 guy, there is not teimtable for a guy my size so we’ve done things differently,” he said. “We ve been very conservative and at the time time I’ve been killing myself working.” The Knicks are focusing on the summer of 2019 when they can target free agents like Kyrie Irving, Kevin Durant and maybe Jimmy Butler to pair with Porzingis and young players like Kevin Knox. Asked about potential free agents, Porzingis kept it vague and said the mood around the team is positive. “So far it’s good vibes around here, it’s good energy around here,” he said. It”‘s good to be in an environment like this. It’s good energy around here and that’s the first thing I saw and I’m happy about it.” As for his role this year, he said he plans to “be around the guys” and be supportive as much as he can. “I want to be there with the team as much as possible,” he said, “be with the guys and help the team as much as possible. So that’s what I’m going to try to do this season until I start playing.” Follow Adam Zagoria on Twitter And like ZAGS on Facebook

Carmelo open to coming off bench to help Rockets win