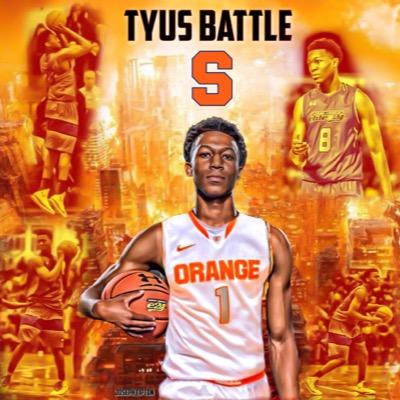 By ADAM ZAGORIA For a while last spring, it remained unclear if Tyus Battle would ever play another game at Syracuse. He tested the NBA Draft waters and worked out for several teams before ultimately choosing to return to campus for his junior year. Syracuse head Jim Boeheim is glad he did. “Tyus Battle [has had] quite a significant improvement in his game over the summer,” Boeheim said Thursday by phone. “The work that he’s put in, it’s great to have him back here.” Asked what specifically has improved, Boeheim said: “His shooting has improved, his ball-handling. I think his physical preparation is tremendous. He just looks ready to go and it’s really good to see a guy come back who can graduate at the end of this year in three years and is so dedicated to basketball and yet he’s going to be able to graduate so I think that’s a great lesson for everybody.” After averaging 19.2 points, 2.9 rebounds and 2.1 assists last season, the 6-foot-6 Edison, N.J., native worked out for the Knicks, Nets, Clippers, and Magic, but chose to withdraw from the Draft on May 30. He is currently projected as the No. 29 pick in the Draft, per the latest ESPN.com mock. Follow Adam Zagoria on Twitter And like ZAGS on Facebook