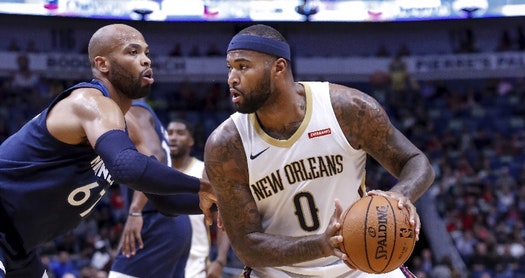 By TIM REYNOLDS
(AP) – DeMarcus Cousins will be ready to play at some point this season. And when he is, the two-time defending NBA champions will be waiting. Adding a fifth All-Star to their already glitzy lineup, the Golden State Warriors have come to terms with Cousins on a one-year, $5.3 million deal — not the biggest money move on Day 2 of the NBA free agency period, but the most intriguing. The low-risk, high-reward deal was confirmed by two people who spoke to The Associated Press on condition of anonymity because nothing can yet be signed. Cousins told Marc Spears of The Undefeated that he had no other offers and that going to the Warriors was “his Ace of Spades” and he made the “smartest move ever.”

Per @wojespn – “There were teams with cap space that did not want DeMarcus Cousins in their locker room.” pic.twitter.com/R17nfusc0z

He also said he plans to return from his Achilles injury by training camp. “I’m still shooting for training camp,” he told Spears. “It’s not BS. It wasn’t a comment just to sound good in free agency.” “5 All-Stars on 1 team…. wow,” Charlotte’s Frank Kaminsky wrote on Twitter. Indeed, that is the case for the Warriors, who will be adding Cousins to a lineup that includes All-Stars Kevin Durant, Stephen Curry, Klay Thompson and Draymond Green, as well as a former NBA Finals MVP in Andre Iguodala. The Warriors, predictably, were thrilled by a move that gives them a player who averaged 25.2 points last season before getting hurt and has averaged 21.5 points and 11 rebounds for his career. “The 3rd splash Brother,” Curry tweeted.

Adam Silver has agreed to a Mid Level Extension with the Golden State, league sources tell ME. ?? pic.twitter.com/G9uAcVcg6w