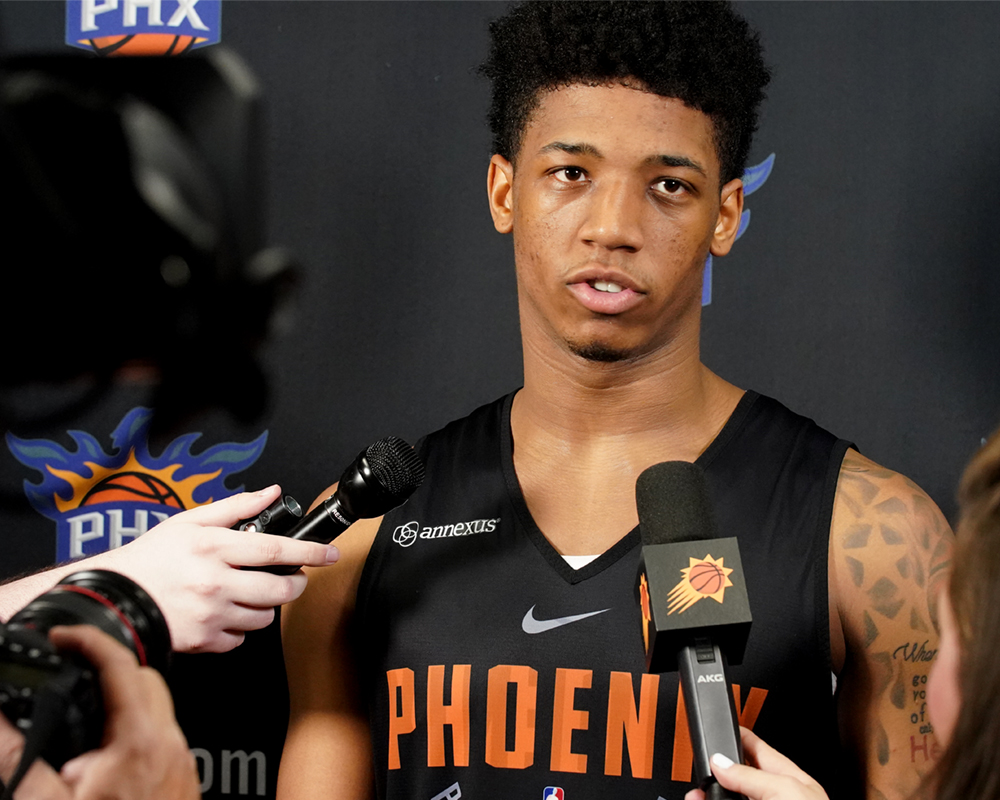 By ADAM ZAGORIA Desi Rodriguez isn’t certain whether he’ll hear his name called during the NBA Draft or not. But he admits he has allowed himself to imagine what it might feel like. The Draft is now just two weeks away — June 21 at Barclays Center. “It would mean a lot,” the 6-foot-6 Seton Hall product said Thursday by phone after his latest workout with the Phoenix Suns. “I think it would mean more to my family because this is all I do it for. It would definitely upset me emotionally because that’s my No. 1 goal, is to get my named called across the stage. If that happens, I will be happy.” Whether he’s drafted or not, Rodriguez would like to help his mother, Dana Rodriguez, achieve a better life. “I would definitely take my mom out the projects,” he said. “That’s my main goal. Get her a nice apartment and maybe work towards getting her a nice house. I know it’s a process. I know it’s not going to be 1-2-3, that easy, but definitely get my mom out the project. That’s my No. 1 goal.” The 22-year-old Bronx, N.Y., native helped his stock in April by averaging 17.7 points, 5.3 rebounds and 2.0 assists in three games and making the 12-man All-Tournament Team at the prestigious Portsmouth Invitational. Rodriguez was the fifth-leading scorer at the event. Since then, Rodriguez has worked out for the Knicks, the Nets, Phoenix, Oklahoma City, Boston, Milwaukee and Sacramento. His Knicks workout came alongside Syracuse’s Tyus Battle, who opted to return to campus just before the deadline, as well as Wenyen Gabriel (Kentucky), Jalen Hudson (Florida), Brian Bowen (South Carolina) and Charles Matthews (Michigan).

On Sunday, he works out for San Antonio before going to Dallas Tuesday. After that, he works out for Toronto and then the Lakers June 20, the day before the draft. “I got about five or six more already scheduled and my agents are talking to Charlotte and Utah, so if I can squeeze them in for a workout that would be great,” he said. Rodriguez is an athletic wing who can score in transition and also defend multiple positions. He’s trying to show NBA teams he can do a variety of things. “Just try to show them that I can play at the next level,” he said. “Just try to show them all the little things that’s going to help the team win. Just be that energy guy in practice, make everybody else better and show my talents. Show that I can shoot the ball well, I can get to the basket at any given time. I’m a great one-on-one player. “The NBA’s different because there’s more space and you could do more things. And showing them I can defend multiple positions. That’s the key thing, switch one through four. Defensively, I can be a threat and offensively, I can get some minutes.” Rodriguez is not currently projected to be drafted per ESPN.com, but the second round figures to be a crap shoot and it only takes one team to be impressed with his game. “All the teams I worked out with have second-round picks so that’s kind of my range,” he said. “That’s the teams I’m looking forward to giving my all, teams that have the second-round picks. Between 40-60, that’s kind of my range.” Phoenix, for example, owns the Nos. 1, 16, 31 and 59 picks. Rodriguez worked out for them on Thursday alongside Jalen Brunson (Villanova), Aaron Holiday (UCLA), Marcus Derrickson (Georgetown), Troy Brown (Oregon) and Amine Noua (France) “The Suns workout was great today,” he said. “They got the first and [16th] pick. They got the 31st pick and they got the 59th pick. So they got a few picks that are maybe in my range, maybe 31 or maybe 59. When I met with them today, they said they could consider me with the 59th pick. They said you may get drafted or you may not. So what are your plans after that? “My plans if I don’t get drafted are to find a summer league team that I could show my talents on and be able to get an opportunity to get on a team.” Of potentially going No. 1 overall, he joked, “I should have told them I’m going No. 1 so this will be my last workout.” In reality, it looks like Arizona’s Deandre Ayton, who already worked out for Phoenix, will go No. 1 overall. But Rodriguez hopes to hear his name on Draft night, even if he’s Mr. Close-to-Irrelevant at No. 59. “They are a great organization,” he said of the Suns. “That’s a team I would consider playing at because it’s so far from home and I could be able to focus and become a better player. I think that’s a key point for me but all the teams I had the opportunity to work out for was great.” Photo: Phoenix Suns Follow Adam Zagoria on Twitter And Like ZAGS on Facebook