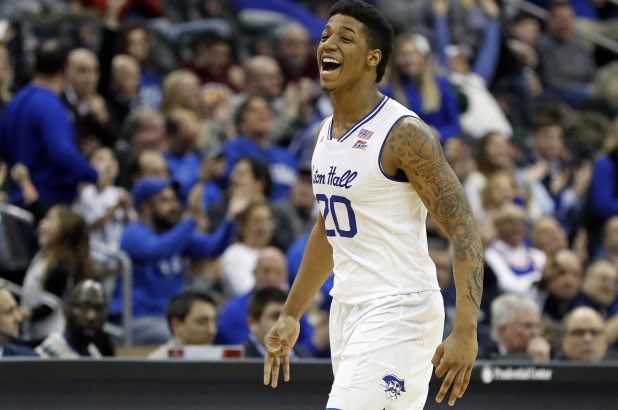 By ADAM ZAGORIA Seton Hall’s Desi Rodriguez helped himself with NBA scouts with a big-time performance at the Portsmouth (VA) Invitational which ended on Saturday. The 6-foot-6 Bronx, N.Y., native averaged 17.7 points, 5.3 rebounds and 2.0 assists in three games and made the 12-man All-Tournament Team. Rodriguez was the fifth-leading scorer at the event. Rodriguez, who is not projected by ESPN.com to be drafted, met with several Western Conference teams at the event. “Portsmouth was great,” Rodriguez said. “It was a very exciting experience for me. I was able to sit down in front of a few teams and talk. There is a lot of interest from teams who my coach and agent talked to and who said good things about me. I was just happy I was able to compete.”

Your all tournament team for the 66th annual PIT! Image courtesy of @marchmadness ? pic.twitter.com/dkISaTLoQP

Seton Hall coach Kevin Willard also said he heard from a “a lot” of NBA teams about both Rodriguez and 6-10 center Angel Delgado, including both the Knicks and Nets.

Houston’s Rob Gray with a dime to Seton Hall’s Desi Rodriguez for 2 and the foul! #PIT2k18 pic.twitter.com/q1ia9EeE51

Delgado, the Kareem Abdul-Jabbar Award winner as the top center in college basketball, was second with 11.5 rebounds in two games at Portsmouth. He missed his last game due to a back/neck injury. “Rodriguez and Delgado played very well,” one NBA scout in attendance said, adding he thought they had a good chance to be invited to the NBA Combine May 16-20 in Chicago. “They helped themselves.” “I think they have a chance to get drafted,” a second scout in attendance said. “Delgado is a great kid.” Seton Hall senior guard Khadeen Carrington was also at Portsmouth and averaged 10.3 points and 3.7 rebounds per game.
Follow Adam Zagoria on Twitter
And Like ZAGS on Facebook